A couple weeks ago, my friend Angela asked me, "Want to hear another Alan story you can use for your blog?"
I'm always ready for an Alan story. The resident ghost at her house has become … if not a friend, at least a long-time acquaintance. My readers know he's even come over here to my house to visit. So of course I said, "Yes, tell."
"My husband and I were sitting on the couch last night watching TV," she began. "And you know where you usually see our remotes lined up in our house."
"Uh huh. On the arm of your sofa."
"Well, all of a sudden the channels started changing. We looked at the channel remote and the light was flashing. I swear, we weren't touching it."
"I believe you," I said.
"It was Alan. I sensed him. Now he's learned to change the TV channels!"
"What did your husband think of that?"
She laughed. "I looked at him. He looked back and just shook his head. He doesn't say much about the things that happen around here. Just that he wishes they wouldn't happen to him."
We giggled. Alan has made sure Angela's husband is aware of him, even causing one of their daughter's toys to crow like a rooster morning after morning until Angela disabled it. Which sent Alan into one of his periodic pouts.
I've been wondering one thing about Alan, but haven't had time to sit down and talk to him. He tells Angela that he has a girlfriend, and he goes off to see her, usually in the evenings. He even hints to Angela that … gasp! … he and the girlfriend have … shhhhh … ghost nooky. I am totally uncertain if this is just Alan bragging or not. After all, he is male.
During class one day at Angela's, we were practicing soul traveling. Angela said Alan was very excited when she managed to start looking around out of her body.
He said, Now you can go with me and meet my girlfriend! Let's go!
Oh, no, I'm not! she told him. Then related the conversation to me when we came back to her living room.
So ever since Alan admitted to me that he comes over here to my house (he was here reading my blog as I wrote it), I've wondered if his girlfriend lives here with me. He's rather teasing about confirming that, but with his ego, I’m sure when I take the time to sit down and visit, his bigheaded personality will force him to brag.
Right now, I have just returned from a conference in the Dallas area with my friend Amanda, hence the late posting of my weekly blog. Well, another hence is there was some glitch that refused to allow me to post my blog from my laptop at the hotel, where we stayed for the FenCon Conference. It's always full of sci-fi, fantasy and filk folks — lots of fun! Angela had wanted to go, but she has to have knee surgery in a couple weeks. After that, she won't be able to sit at the computer for long periods, so she's working hard to get caught up on her own work. However, I took some of her cover design work and business cards with me to show people at the conference what fantastic work she does.
You can see her cover work on my two new books. They're becoming available for most of the e-readers soon, but for now they are at Amazon for Kindle, Barnes and Noble for Nook, and Smashwords for other e-readers. I gave out bookmarks at the conference and my sales reports are showing a nice surge! 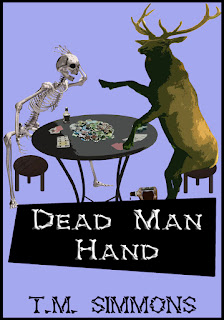 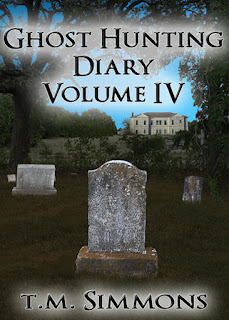 Amazon Kindle: http://tiny.cc/s3f0jw
BN Nook: http://tiny.cc/0sapkw
SW various formats: https://www.smashwords.com/books/view/226541
Thank you to everyone who sent thoughts and condolences on the death of my brother-in-law, Raymond. He will be missed. But I'm sure he will pop in for a visit now and then. I know for sure he has crossed over and is at peace, out of pain.
October is on the horizon! The Veil will start thinning, and it will be easier to see our loved ones. Be careful not to open a path for any of the nasties waiting for entrance to our dimension, though. This would be an extremely bad time to mess with a Ouija board.
Happy reading, and …
Boo!
T. M.
Posted by TM at 6:50 PM