You'd think more of my paranormal residents would come around and wish me Happy Birthday, but it's been a quiet week. Y'think maybe they're staying away so they can't catch my nasty head cold? Nah, ghosts can't catch colds … I don't think. Sometimes when days pass with no unusual incidents around here other than the minor there's a ghost nearby feelings, I get suspicious. One incident actually did rouse my concern.
Sis and I were running errands, and we stopped to pick up a snack and drink. She tried to set her drink in the console cup holder, but it didn't fit. She didn't say anything until we got home. Then she showed me a steak knife in that cup holder! It looked like one of mine from the kitchen, but I couldn't be sure.
We brought the knife in with us and asked my husband if he'd had it in the car for some reason.
"No, I didn't," he said. "In fact, I saw it and was going to ask you two about it. But I forgot."
"Huh."
I put the knife in the dishwasher, although I'm considering moving it to the garbage. I haven't felt anything bothersome around here, and neither has Sis. But I'll keep an eye out and my senses open. Also, Aunt Belle arrives on Thursday, so I'll have her on lookout, also.
I did have a query on my Facebook page about a ghostly problem one of my readers was having. We believe she took care of it with the advice I passed on. I always get warm fuzzies when that happens.
I don't believe in totally banishing a ghost unless it's necessary. You're just sending the ghost off to give someone else trouble. I much prefer crossing him or her over, where they belong. Most of the time, that's doable for me around here. However, although I buy tickets every week, I still haven't won the lottery, so I can't go jet-setting off to corral a bothersome ghost.
On the writing end, I had a wonderful letter from a fan in Russia! It was about one of my romances, and it gave me an abundance of warm fuzzies. She said the book had helped her through a rough time in her life. That's so neat, and one of the things we write for.
I also have a couple of the stories for the next set of diaries drafted out. With this stupid head cold, things are going slow this week. However, I'm plugging along.
One thing I did accomplish was working with a friend's husband on a trailer for my Dead Man mysteries. Her husband retired, and she said she's looking for things to keep him busy. I can relate to that, too. My gain, since he does great work. I can't wait to show it to y'all, hopefully next week, and I'll post info on how to contact him for anyone interested in getting him to do something for them. He's also making one for the Diaries, and that should be cool. I ordered spooky/eerie. I'll let y'all know here and on Facebook and elsewhere when they're tweaked and ready.
I know I have quite a few male followers, and maybe you enjoy sci-fi. But we females like spooky/scary suspense, too, no matter what the genre. My friend C. L. Smothers just indie-pubbed a great book called The Wormhole Project. Talk about nail-biting suspense. I was privy to the writing of this book, since C. L.'s in my local critique group. I can't tell you how many times my stomach clenched with suspense when he read a chapter. And talk about the nasty, scary monsters on those planets. Nightmares. Right now, the book's only on Amazon, but here's the information: 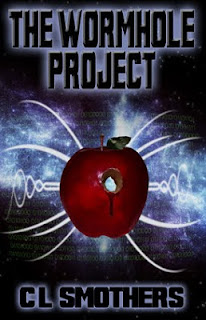 
Stay away from that flu bug if at all possible. I have resorted to carrying a face mask in my purse and making hub wear one, also. If I get around someone who refuses to cover their cough, I make no bones (verbal or action-wise) about leaving the area where that person is. In fact, I'll even abandon a waiting line and go to another one.
Stay safe and well.
Boo!
T. M.