Who's in Charge, the Ghost or Me?


We did another private home investigation this past week. I don't identify those publicly, but overall, this one was interesting. One of the darn ghosts there truly must have had a sense of humor. We had my Raggedy Ann doll, which Aunt Belle named Anna Lee, set up beside a flashlight on a bed. A video cameras focused on Anna Lee, and here we were, just chatting away with the ghosts. Floyd is our crew member who asks most of the questions, and he does a great job with it. Funny thing, we were getting fantastic responses from the flashlight, but Anna Lee just sat there "light-less," even though we urged and pleaded with those darn ghosts to make her hands or head shine, too.
"Huh," I said at one point. "I can't tell if Anna Lee's hand just lit up or not. It could have been the flashlight reflecting."
"Maybe we should move Anna Lee," Sarah said.
I picked up the doll … and gosh darn it, she was turned off! So that told me it had to be a flashlight reflection, not a response. I turned her on and moved her a couple feet away, then Sarah checked the camera to make sure we were still filming her. Floyd started asking again for the ghosts to light up Anna Lee.
The only light in the room continued to be from the flashlight. And when we wrapped up the session, Anna Lee's switch was off again! Darn ghosts.
Here's one of the photos of Anna Lee and the flashlight. You can see the flashlight beam, but little Anna Lee just sitting there with no energy around her. I didn't notice until I picked her up that the light in her chest, which indicates her switch was on, wasn't glowing. 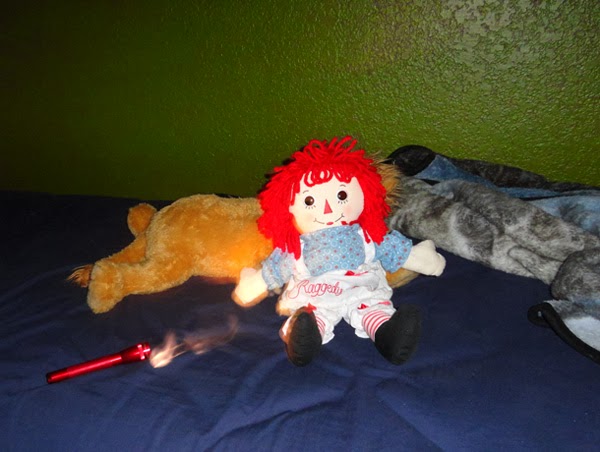 We were discussing things on the way home. One thing we talked about was how each investigation is so very different. We can go to the same place and still get different results. But something else was bothering me, and I couldn't figure out what it was. It wasn't until right before I went to sleep, when I'm usually the closest to my guides, that it came to me. I think it stemmed from the investigation last week, when I ended up apologizing to the ghost in order to get her to cross over. At the time, I didn't really feel it was inappropriate; however, on reflection, it might have been.
Over time, we've sort of fallen into asking ghosts we communicate with things that perhaps we shouldn't. I'm a big believer in something that Aunt Belle and I have practiced all along: if a ghost needs discipline, we mete it out. We are in charge. We don't give the ghosts a choice about how we do our investigation, ask their permission to film them, or anything else for that matter. Now, I don't mind explaining to them what we are up to, as long as we explain rather than ask permission. Also, I try not to be overly rude, and I will say please and thank you. I also firmly do not believe in provocation in most incidences. There are times when provocation is necessary, but that's for completely different situations than what we do in a normal investigation (if there is such a thing as a normal paranormal investigation). :-)
There are several reasons for this, and I'm certain I'm right. For one thing, I firmly believe we have to have faith in our abilities and what we do, how we do it. It's for our own safety. To me, part of that means staying in charge of the situation and maintaining control. For another, the ghosts we encounter are lonely and confused entities, even those who are somewhat malicious and troublesome. We can't let them get even more out of hand. If we do, we risk giving them even more confidence in themselves and possibly leaving behind intensifying problems for the homeowner.
I have a great crew in SRT. We can talk about things and come to conclusions that are the best for our investigations. Shoot, my own thinking has changed several times after a discussion about something we are doing or have done. I also recognize the different abilities in my crew members and I step back and let the best person available handle different situations. Our motto is, "Leave Peace Behind." We are the ones responsible for what happens in the homes and other haunted places we go into, and I truly feel we need to stay in charge of things in order to fulfill those responsibilities.
So don't tell me how it's going to be, ghost. I'll respect you, but I'll demand obedience from you.
~~~~
Man, this flu and other illnesses going around sure can play havoc with writing time. However, I did get some writing done this week, on two different new books. I miss writing like crazy when the time just isn't there for it. I'll put up Living with Dead Folks, Volume Two, in February. By then, I'll know what comes next, since I'm working on three different projects right now. Yes, one of them will definitely be another volume of true ghost stories.
Also, just for fun, here's a picture of Aunt Belle with my dil's new puppies! Yes, these are puppies, only three months old: Jake, Isabella, and Gracie. I plan to visit often, so they will know me as they grow older. Right now, they are adorable, but I wouldn't want to see this trio coming at me out of the dark. It's a good thing son and dil have three acres for them to roam. 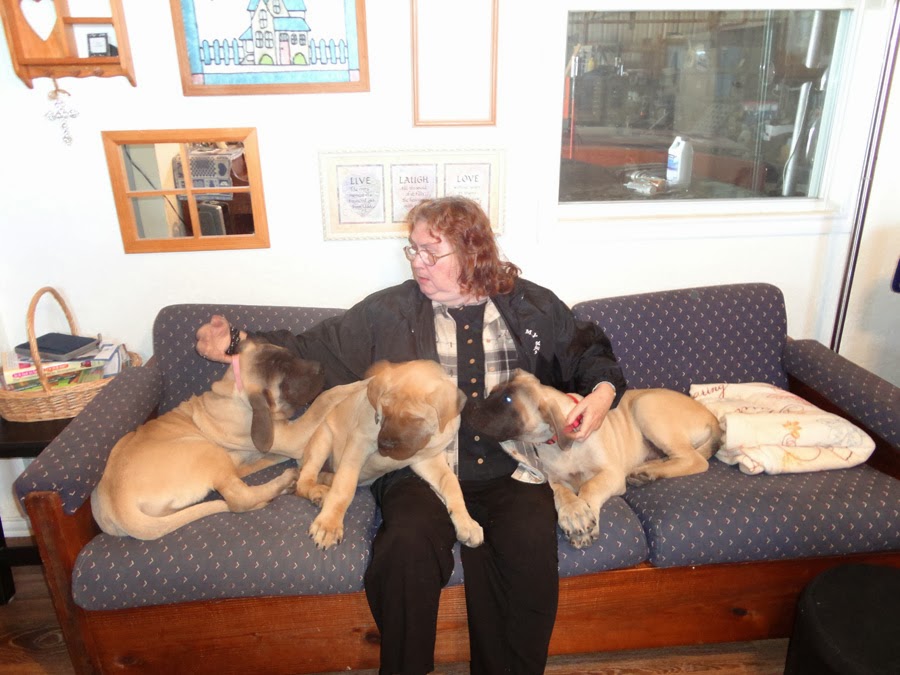 Try to stay warm where you live, or cool, if you're one of my friends down under … and safe.
Boo!
T. M.