Wow, what a weekend. I went to the FenCon conference and roomed with Angela. While I didn't run across any paranormal happenings, as I have previously, it was a lot of fun.
At the Simmons household, there's been something going on, and I still haven't figured it out. Hub always sets the TV timer and falls asleep with Letterman on. After he zonks out and the TV is silent, I read until I get sleepy, which can sometimes be a couple hours. But things have been sort of weird around here during those hours this past week. At first, I thought, Kids are prowling the streets again and talking their heads off. The problem was, I couldn't understand anything they were saying; it was a lot of mumbling. And it didn't move away, as it would have if a group of kids was walking past the house.
This happened virtually every night last week until I left for FenCon. I could tell it was a conversation going on, because there was more than one voice, both female and male, and different tones of voice. It sounded as though there were several men and women talking about … something. I just couldn't understand them well enough to hear what they were discussing, no matter how close I listened.
This is all probably part of the delayed cleansing I need to get my butt in gear and do to the entire house, not just the bedroom. It definitely is on my list for next week. This conversation sounds really interesting, no shouting or arguing in the tones, so I don't feel threatened. I wish I could understand it … or maybe I don't.
~~~~
As I said, I had fun at FenCon. 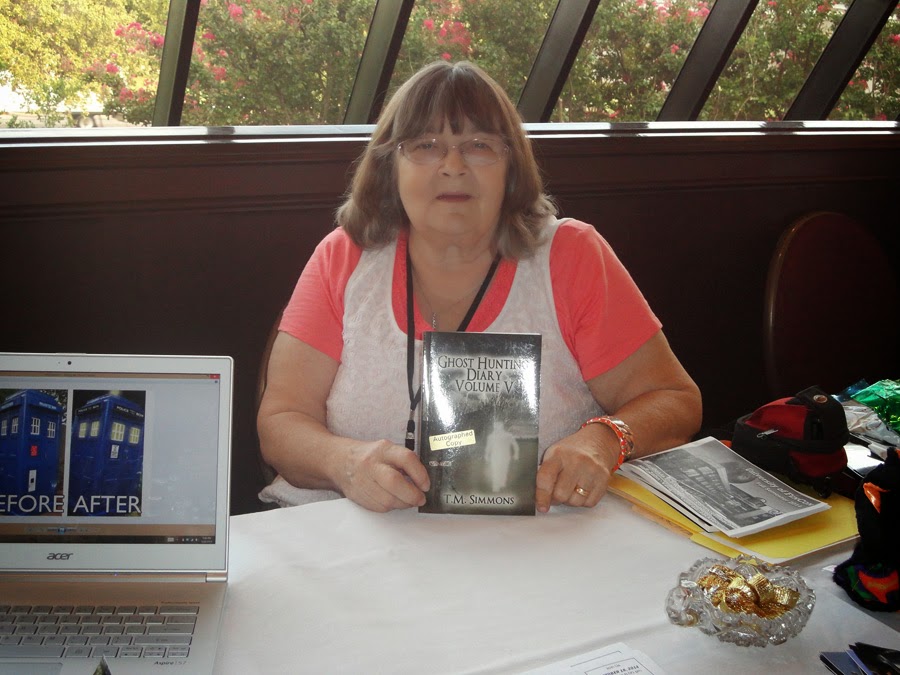 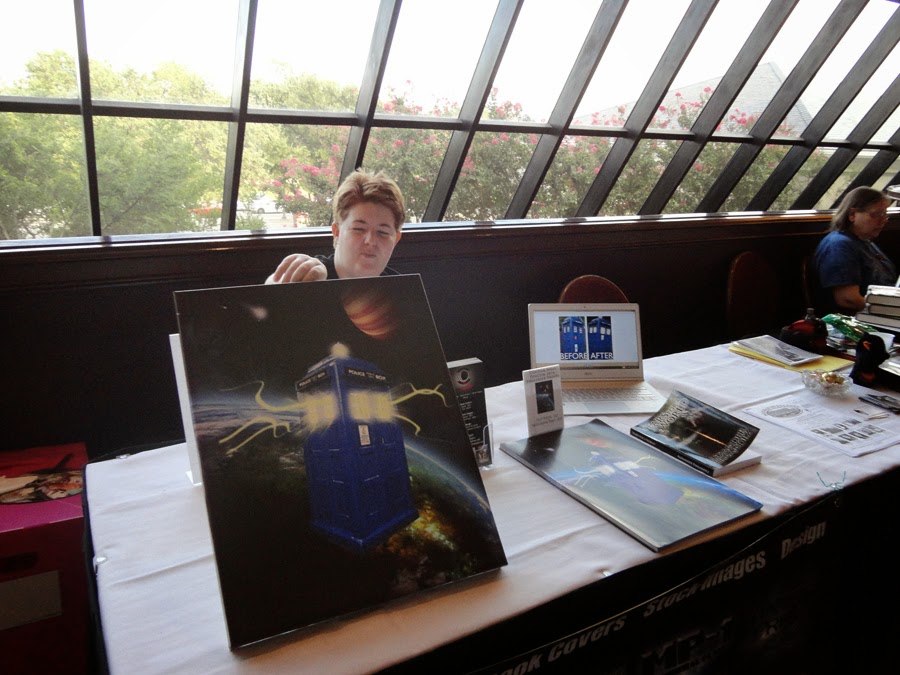 Then there's Angela in her costume for the afternoon/evening: 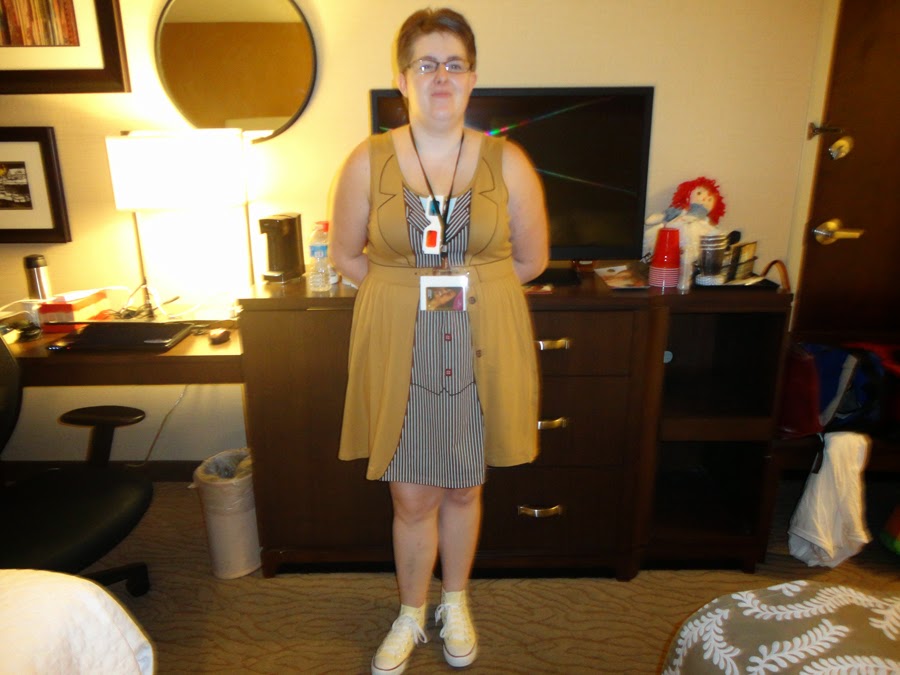 The main thing about this conference is the load of creativity in the air. There are authors there, but from nearly every imaginable genre: sci-fi, horror, mystery, romance, and lots of mixtures of the various genres. There are also song writers, and you see them with their tablets all over the place scribbling down lyrics or fine-tuning them. And the artists! Not just paintings, but awesome sculptures and pottery. Most of the stuff in the art room is in the fantasy/sci-fi genre, but there are a lot of Dr. Who fans at this conference, also. I sat in on the art auction, and there were some great bargains; there was also a lot of money raised for charity. I brought home a beautiful box carved with a Celtic Cross to store my Tarot cards in, plus a cute, feel-good print of a tiger kitty in a witch's hat, sitting on top of a crystal ball.
The creativity is so thick, dozens of people seem to be jotting down ideas for their personal creative path. Floyd, one of my SRT members, told me he nearly had a new song written. I never leave this conference without either an idea for a new story or, as happened this year, figuring out a problem in a story I was working on.
I had this great idea for this year's Halloween story, but not only did I not have a title for it, the setting just wasn't working. When Angela critiqued what I actually had written, she said, "It's seems like it has a steampunk bent to it, but then it doesn't follow through on that."
Ahhhhh, my muse went, and he also went to FenCon with me. We definitely have that story all worked out now. Well, except for the title. But as soon as I can get a couple other tings out of the road (like this weekly blog), I'm going to sit down and let my fingers fly.
I also met this wonderful lady on Saturday who agreed to be the cover model for this story. Here is Alyssa, and isn't she gorgeous! She's going to be a fantastic Eartha. I'm adding her Facebook page url at the bottom of the photos. The first is from her Facebook page, the other one I took at Fencon. 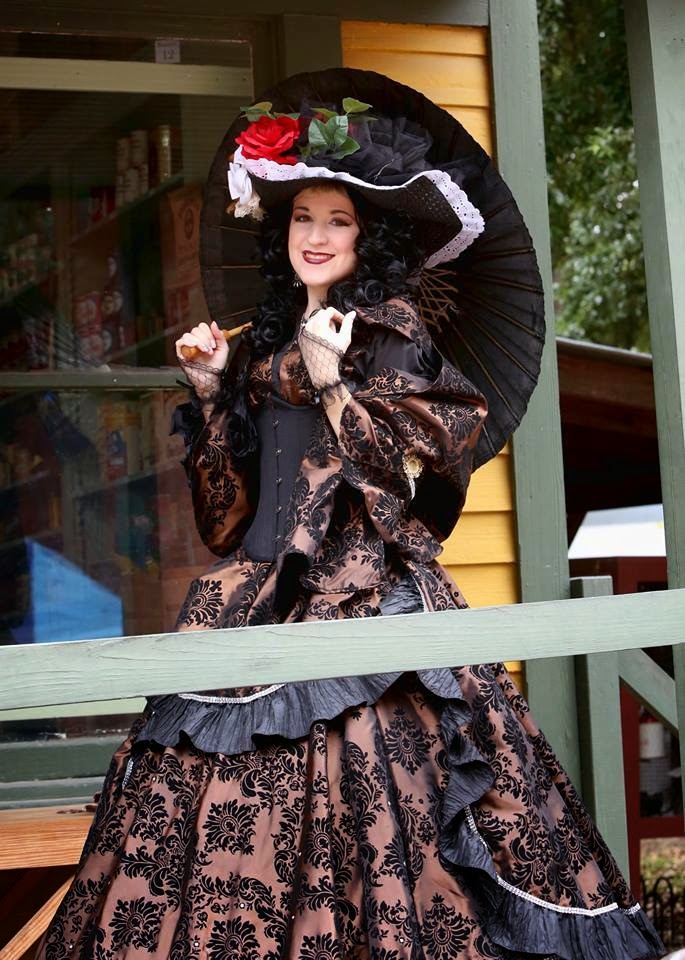 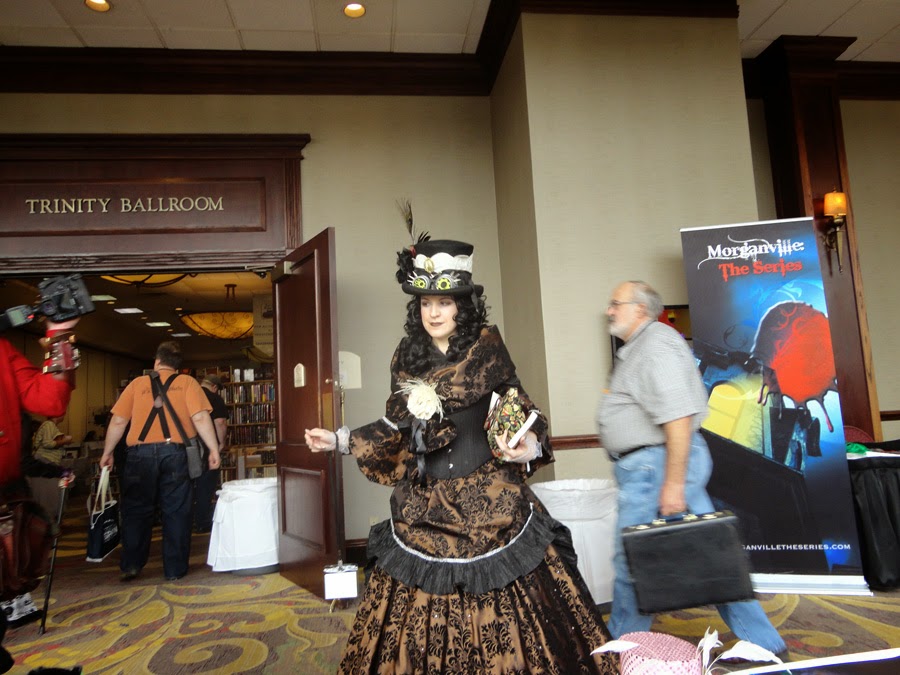 www.facebook.com/queenvonware
Here, also, are a few of the titles I've weeded out. I'm leaning toward the first one. However, feel free to comment in the blog or tell me on Facebook if you like one of the others.
Deliver Us From Evil
Dogs of Darkness
Hounds of Destiny
Death Whispers
Hellhound Harbingers

The other news this week is that Dead Man Talking is now an audio book! How cool is that? Shelley Lynn Johnson did a fantastic job narrating it, and she's going to do Dead Man Haunt next. It's available at the links below the cover: 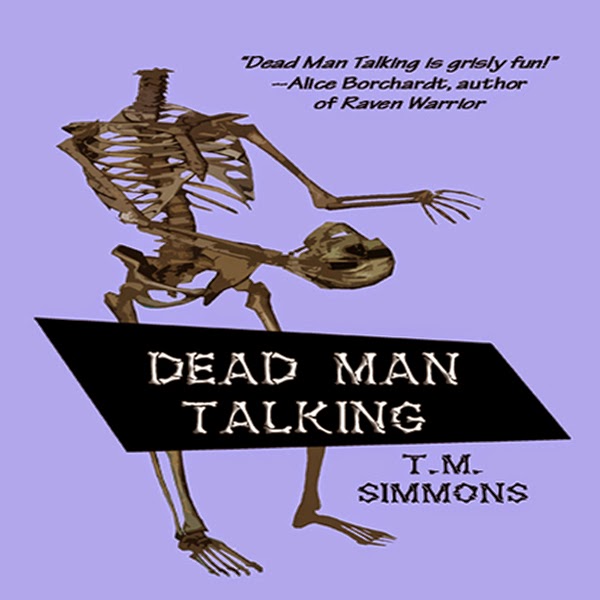 The Beckham Spirit Fest is coming up on us fast. October 18 is nearly here. We've already gotten in quite a few pre-event ticket sales, and the ghost hunts are filling up fast. The one at the hotel is sold out, and the Chamber one only has a few spots left. There are still ten at the cemetery, but if things keep up like this, they'll be gone soon, too. Three are all we have people to lead, and ten participants in each is what they will all be capped at. So holler at me if you'd like to get a reservation.
Hope to see a lot of you there. Also, I don't say this too often, but I'd appreciate any shares of the blog and book information.
The Veil will continue to thin and communications from the spirit world will be more easily accessible. But that also means there might be some unwelcome visitors from the other dimension. Stay safe!
Boo!
T. M.