This weekend isn't the first time I've noticed a ghost in or around a casino. But it's one of the rare sightings my husband makes.
I got tickets for Bugz, Blues and BBQ at Sam's Town Casino in Shreveport, Louisiana, where I had a room with an affordable rate. The Mudbug Festival was also going on this past weekend, so there were a few things to do besides gamble. The room was really nice, but the moment we walked in with the pleasant young guy pushing our loaded luggage rack, I noticed someone else already in residence.
He was tall, black hair, and nicely dressed in a white shirt and trousers. I got the impression he loved to gamble, but also liked staying at the hotel and being around other folks who enjoyed the excitement of playing the odds. Tired from the three-hour drive, I didn't chat with him, and he didn't bother me. He hung around the bathroom … at least when he was in the room with us. I only glimpsed him three or four times, so perhaps he also roamed the boat.
Later on that first day, we returned to our room to rest before we headed out for more fun. As Barney sat down on the side of the bed, he froze, staring toward the bathroom.
"Is there anyone else in here with us?" he asked, although I'm certain he knew I hadn't called for any room service.
"Why?" I asked, trying to concentrate on the book I was reading.
"I just saw a man over there by the bathroom," he said, and he didn't sound very happy about it.
That got my attention, and I looked up at him, surprised he'd actually seen the man. "Uh … yeah, there's a ghost here," I said. "He's been here since we arrived. He won't bother us."
He didn't look like he believed me, but what could he do? He laid down and turned his back on the bathroom, so at least he wouldn't have to watch the ghost if it decided to prowl around a bit more.
The first gambler ghost I recall meeting was James at the St. James Hotel in Cimarron, New Mexico. ("St. James Jeepers Creepers," Ghost Hunting Diary Volume IV) He wasn't the "James" in the name of the hotel, just a gambler who played in the numerous poker games there. I saw him while we were checking in, standing behind Aunt Belle. When I whispered to her that there was a gorgeous ghost behind her, she said, "I know. He's pulling my hair, and he's a gambler."
That explained his clothing, since he wore a black suit from the late-1800's, with a gold watch with a chain and fob across his vest. Later, Aunt Belle said his name was James.
James accompanied us when we left the hotel and continued our trip. We lost him at the casino riverboat in Natchez, Mississippi; however, Aunt Belle saw him again one night in a nursing home where she was working.
Women like to gamble, too. I've been known to push a slot machine button now and then. J At a casino in Turtle Lake, Wisconsin, someone invisible opened the door to the women's restroom and walked out while I was washing my hands. ("Casino Carouser," Ghost Hunting Diary Volume I) I hope it was a woman, although both the bathrooms at my house are haunted by males.
One of the saloon gals from the St. James Hotel also appeared in my home a few months after my visit to that wonderful old place. She was the blonde in the mural on the wall of the game room there. I never asked her if she gambled herself. In the mural, she's flirting with a cowboy in a card game.
I've felt ghosts several times when I'm around a historical place where part of the entertainment was a type of gambling, and even other times at today's modern casinos. Perhaps it's a fascination with the noise and suspense of gaming, or more likely in my opinion, the energy that flows around the people visiting there. Paranormal researchers believe ghosts can use the energy from others to serve their own purposes, such as visualizing like the one did recently in our hotel room. Of course, their presence can foster different reactions. I love seeing them. Others would rather not.
But then, I see ghosts a lot more often than many people do.
****
It's going to be another one of those busy weeks after my couple of days "vacation." I'm looking into moving the blog to a different server (BlogHer), but I'll make sure everyone can find it. Hopefully, it will be an easier design and I can put up some photos for y'all to look at. While I’m moving, I'm downloading the blogs to put up in a collection in a new e-book. I'll also be working on Silent Prey, and Angela has a fantastic cover idea for that one.
Our weather is starting to work into those hot Texas summer days, and we'll have to be up early for any yard work. Luckily, the next door neighbor shares his yard man with us. However, we have plenty we have to do ourselves.
It's nearly sunrise, so off to (more) work I go! In the meantime, Ghost Hunting Diary Volume V is up at all these e-book sites: 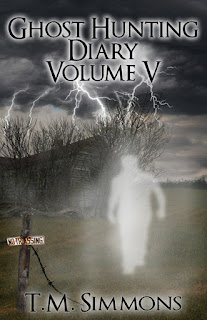