There's a lot of the "new" technology that's over my head. Thankfully, my good friend Angela is patient with me. However, I'm doing this on my own, since SRT is going ahead with a book we have planned about ghosts in Mineola, Texas, and we want photos in it. So I need to do my part and learn, although as a group, we have some awesome tech abilities. They're almost on par with the sixth sense abilities we share.
Speaking of which, Angela and I had an intense experience here in my house a couple weeks ago. While we waited for the rest of our critique group to arrive, we nearly froze to death in my dining room. Of course, we'd both been aware of the ghosts clustering around, but we were busy chatting. Perhaps they grew impatient with us ignoring them. The cold descended on me without much more than a second's warning. I glanced at her, and as sometimes happens, we didn't need to communicate with words. I read on her face, and she on mine, that we were both feeling it: icy, deep cold.
We shivered and I said, "Hey, that's enough of that! Back off or I'll run your butts out of here and not allow you back!" They obeyed, thankfully, but after at least another five seconds of cold. They backed off just as I was getting ready to retrieve my protection satchel and take care of their disruptiveness. I'd rather allow the ones who have their own reasons for not crossing over to hang around here rather than wander lost and lonely; however, I don't tolerate disobedience. I can only imagine how unsettled my house would be if I let them do what they wanted.
Back to Hell House … or the tale of it, since I am staying far away from that nasty place. If you've read the story in Ghost Hunting Diary Volume V, you'll recognize these photos.
Please remember that these are old photos and were taken by ancient, cheap .35mm cameras. Therefore, they don't scan very well. Angela gave up on getting one of them in good enough shape for the cover. You'll just have to put up with the best I can make them.
The first is a photo of the house that night, with Cody at the door: 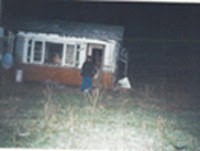 This is a picture of Cody being slammed against the wall and trapped by that nasty entity: 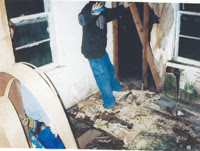 This shows Cody's mother, Sammi (Aunt Belle's daughter) trying to rescue him but being held back by an invisible barrier. Cody is now plastered against the wall, and it's moving him upward, bending back his legs: 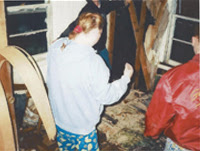 This is a picture of their friend carrying Cody out of the house after the friend was able to break through the barrier. That's Cody's sister Tara behind them. 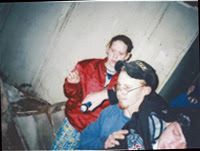 Another picture of them carrying Cody, this one with the friend and Sammi: 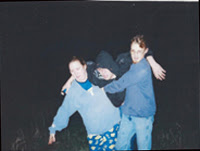 One more picture of Cody being carried: 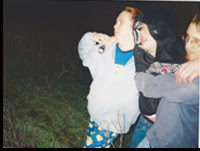 This is inside the car as they were escaping, the entity right outside the window on Cody's side of the car. That's Tara and Aunt Belle's other daughter, Shari, with him: 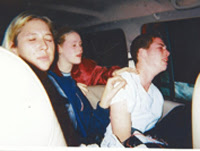 There is danger out there. Don't be foolish and confront it.
Boo!
T. M.