Sometimes paranormal investigating is disappointing, but this situation could have truly pissed me off, if I hadn't known things like this happen. We'd planned on going to an old cemetery outside Mineola, Texas, on Friday night. It's a historical site, and I'd been there once before in the daytime with a couple other SRT members. Although it's beautiful, we experienced a very unsettled atmosphere. I opened a door into The Light that day, and several lost souls crossed over. I really wanted to go back at night, both to determine if I could help bring some peace to it and, frankly, to see what we encountered.
When I sought permission, one man said he would be happy to meet us there and make sure the gate was open. A few hours later, a message on my voice mail told me someone with more authority had rescinded the permission. I called the second man myself and assured him that we were not a fly-by-night group, that we were made up of experienced, older members, all with professions that included teachers, nurses, writers, etc. I even gave him the names of some people in the town who would vouch for us. He more or less responded that it didn't matter, that he "didn't want people like us in the cemetery" and for "people like us to stay away from there."
So I changed the plan, which wasn't hard to communicate to everyone, since everyone except Timmy ended up unable to go with me. My husband agreed to tag along, and the three of us went to a different cemetery in Mineola. It had formerly been called only City Cemetery, and I totally forgot to get the complete new name. However, it's Cedar (Something) Cemetery. (Google doesn't appear to have the updated name of this one.) 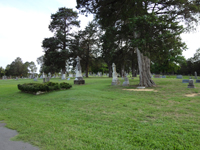 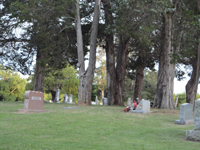 We checked in with the Police Department, assuring them we had permission to be in there after dark. The dispatcher was rather excited to meet my husband and me, and the patrolman who happened to be in the office was nice, even with the somewhat skeptical smile on his face.
We even took our Doberman, Bonnie, along, since she's been grieving pretty badly over the loss of our dog Rex, and doesn't like being left alone. She got out of the car a couple times during our drive around the cemetery. However, for the most part, she wasn't interested in graves and curled up on the backseat. 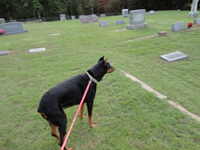 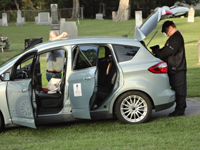 Cedar is a peaceful cemetery, with many old graves but plenty of recent ones, also. It's well-maintained and even has a section for the interment of ashes from those who choose cremation. 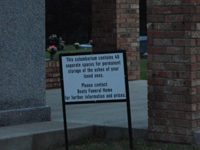 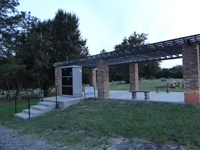 Also fascinating is that the history of the cemetery remains intact. There is a fenced off Black section, which was the norm in the earlier years of East Texas. 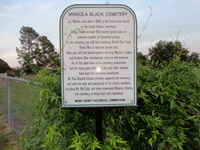 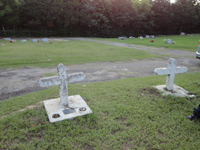 The only drawback as far as an investigation went was the location, still inside the city boundaries. There was quite a bit of traffic on the bordering roads, although as we went deeper into the graveyard, it was muffled. The after-dark digital photos, however, were filled with "orbs," which were only reflected dust particles stirred up by vehicles. 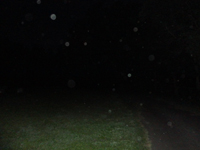 Timmy and I did the investigating, while Barney kept Bonnie company in the car. At first, we thought perhaps the place was a bit too peaceful. The main excitement on my end was keeping away from the tree branches, where I'd already noticed numerous little black spiders in webs! I do not care if they were only little; I don't do spiders.
With only the two of us, Timmy and I didn't set up anything extensive. We put one video camera on a tripod and hand-held our other camcorders and still cameras. We placed Anna Lee (our Raggedy Ann trigger object) against a headstone and a flashlight beside her. 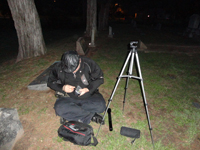 For half an hour, we didn't make any sort of contact at all, and decided to move. The new place, about a dozen feet away and out in the open, didn't seem active at first. However, I immediately sensed activity, and Timmy also felt the cold spots as the entities came around to examine us.
"Maybe it's because it's only me here tonight," I told Timmy during one of our discussions. "We usually have more people with various levels of gifts with us, and perhaps our combined sensitivities work better for communications."
"Could be," he said. "All I've got is a bit of precognition."
"Why don't you lay your voice recorder down with the flashlight?" I mentioned.
"Good idea," he said, and did so.
Maybe his assurances to the ghosts and spirits that we would be able to later hear their voices made the difference. Finally, after about fifteen minutes of coaxing and promising the spirits and ghosts that we were respectful, the flashlight started "talking back" to us in response to some of the names and comments I was hearing telepathically.
"Yippee," I whispered. "They will still come to me."
I'm not sure what the deal is, but Anna Lee never lit up once, even when the flashlight would shine brightly. We've had this happen other times, in other variations. Sometimes she will mirror the flashlight or other K-II's we have on the ground by also lighting up; other times, she will light alone, unaccompanied by the other equipment. Then again, she will remain un-lit, despite a plethora of responses all around her on the various instruments.
We left with over an hour of film to review. I have already watched mine, and there are a couple places on it that I want our computer guru Angela to examine. I also noticed that the digital recorder light brightened a few times on its own, not when the flashlight lit up. So I'll have to wait for Timmy to review that and see if we caught anything.
I enjoyed this trip. It was nice to just relax in an investigation and not have to respond to others wanting to ask about or share their experiences. I haven't given up on the other cemetery, but I also don't plan on antagonizing this man, even though he was rather unkind to me. This is something we have to contend with from people who don't understand what we do or who are in fact fearful of it. He sounded older, so perhaps he has his own doubts as to the afterlife he will soon face. We did find some headstones with his family name on them in the city cemetery, and we ended up setting up cameras close to that area. There, we got our best responses of the evening, so perhaps not all of this man's family is so unpleasant.
My advice, though, is to be respectful of both the living and dead when you do any investigation. Should I never receive permission to go into this other cemetery after dark, I will accept that. In the meantime, I'll keep writing about my experiences, as well as writing books that I hope will give others some pleasure and escape from their stressful lives.
Boo!
T. M.