Ghost at the Chiropractor's


I'll bet you think I just roam around looking for ghosts, right? Well, no, I don't. But they seem to find me now and then.
I hadn't been to my chiropractor for a couple years or longer. However, hub had raised about a dozen tomato plants from tiny seeds, and then he just wasn't well enough to plant them. I volunteered. I hadn't had any back trouble for a while, so I didn't take my little bench out to his small garden plot to sit down while I planted. Wrong move.
At the tenth plant (I remember exactly which one) I felt it. You know, that feeling when your "back goes out?" Ouch! I finished planting the tomatoes and also two bell peppers and two cucumber plants. Then kept hoping my back would quit hurting if I just rested it.
Kept hoping, kept hoping.
A couple weeks later, I gave in and made an appointment at the chiropractor's. They have this amazing water-bed massager. As I was lying there enjoying the receding pain, something drew my attention across the room. There stood a beautiful Native American woman. She was probably in her twenties, long, black hair. She wore a buckskin dress and moccasins.
My chiropractor has a lot of Native American decorations in her office, which has always made me wonder if she has some NA ancestry. She's blond, but that doesn't mean much in today's world. I've never asked her, and I'm not using her name, since I haven't talked to her about this.
Hello, I said mentally to the beautiful woman.
She lifted an eyebrow at me. You can see me?
Yes, I told her. What's your name?
La-Willow. I don't know if that's spelled right, but that's how it sounded.
That's a beautiful name, I said to her.
We mentally chatted for a few minutes, then I asked, Don't you want to cross into The Light?
No, she responded. I know I'm dead and I'm a ghost, so don't worry about me. I'm staying around to be with [chiropractor's name]. I love her.
That's fine, then, I assured her. I'll probably see you again when I have another appointment.
I didn't see her the next time, but the time after that, I did. Then not again for a while. Thursday, I made my last visit,  unless my back goes out again. I was lying on the roller-bed massage table this time, and I felt La-Willow come up on my left side.
Hello, I said to her.
She greeted me back, but when I glanced up, she wasn't looking at me. She was gazing across me to where Myranda, my spirit guide stood. The two of them started chatting, and continued as long as I had my massage treatment. They seemed to like each other. Maybe that's who La-Willow had been visiting with the other times I hadn't "seen" her.
It's been a fun experience. I had thought perhaps La-Willow was lonely, since no one at the office appeared aware of her except me. But now I know she visits with others, so that's nice.
~~~~
Another busy week heading toward its end. I've been fighting with the new laptop I bought. Finally, I took it over to Angela's and had her work on it for a while. It's better now; at least it will get on the internet. Still awfully slow, though. <sigh> She's graciously offered to look at it some more, so that's on my agenda.
Living With Dead Folks, Volume One, is making its way out onto the other e-book venues for sale. This week it's up a couple other places, in addition to the sites from last week. 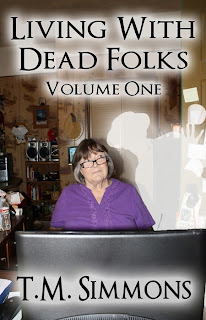 In the UK: http://tiny.cc/pqrv0w £2.02 Kindle Edition
At Kobo: http://tiny.cc/jip80w
It should be at all the other Amazon sites, also, and hopefully will make it into Apple and Sony soon. Supposedly, the book has been distributed there. It's just waiting for the site web folks to get it up for sale.
We plan on testing out some new equipment Timmy has this coming week. Just a simple trip to Dry Creek, where we always get activity and can see what the equipment he loves will do. Plus Angela wants us to come over there and let Alan play with the new stuff. Alan loves to get noisy with our tech stuff. I told Angela to let Alan know that Timmy had bought back his robot, which we call R2. Alan pouted when he heard Timmy sold R2, but now he's back in the family again.
Happy hunting and reading!
Boo!
T. M.