This is gonna be short again this week. I'm writing it on Wednesday, and I'm having carpal tunnel surgery tomorrow morning. Right hand, natch, and I'm a rightie. Something did happen this morning that I thought might interest y'all, so I'll jot that down.
Hub and I were on our way into Dallas for a different doctor's appointment, and when I went into our bedroom, he showed me this: 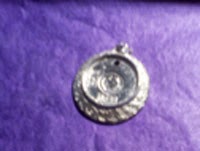 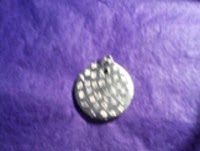 "I found this right there in the bathroom doorway," he said, pointing at the floor where the bathroom and bedroom join. "The insert is missing, but that's how I found it."
We've been working on that bathroom for a while now, fixing up the damage from a leak in the floor. It's going slow, but we're not as young as we used to be. Anyway, I've never seen this locket before in my life, so I have no idea where it came from or how it got there. Unless … it has to be another one of those teleportation situations that happen here in my house.
I've had at least three other teleportation incidents here. One was when I found a gold watch with an expanding band in my office supply closet. My friend Sarah looked at it and swore she believed it was from a lady who had lived across the street and whom I'd been friends with for years. Sarah had helped as a home-health nurse for the last few years of the woman's life, so she knew that watch.
Another time, Aunt Belle and I were standing here in my office and a turquoise ring fell from the ceiling, right between us. It was a ring she owned, but she hadn't brought it with her when she came to visit. The ring was supposed to be 150 miles away!
The third time was when Barney found a Volksmarch medal in one of his toolboxes in the garage. He swore the medal had not been there before, and he periodically cleaned out that box. He's picky like that.
I've added this locket to the collection of the watch, medal and ring. Aunt Belle left the ring with me, saying, "I guess it wants to be here with you, so you keep it."
I never get tired of these awesome experiences, proving at least to me that there is another dimension.
~~~~
Monsters Among Us will be going on sale October 1!! I've been watching for the "available for pre-order" buttons on Kobo and BN, but so far, they aren't up. I'll post on my Facebook page as soon as I find them. Also, if I'm able to type, I'll do a special blog next Wednesday to send out the url's. 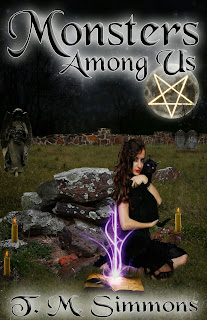