I know I've mentioned this briefly before, but with our favorite holiday, Halloween or Samhain, coming up, it needs attention again. I'm already starting to see more activity on Facebook with people posting supposed ghost pictures. Some of them are so obviously fake, it's hard not to comment. Others are, in fact, possibly paranormal.
I totally refuse to get involved in discussions about whether or not a picture actually contains something paranormal or doesn't. There are too many variables, and not all of them are always in the picture <pun intended>. There are the sensations when the photo was taken, the situation, the locations, and more. I lean on the side of debunking for any possible reason, things like lens flare, sun flare (yes, we do get daylight ghost pictures), probable dust (although I have seen orbs with the naked eye), this, that, the other thing.
I've seen numerous "catches" of flying bugs, in digital or regular film photos. They can look like a flare of lightning or electricity. Some supposed ectoplasm photos are explainable in other ways. The most common is cigarette smoke, and you'd be surprised how many people out there are unaware you shouldn't smoke when taking photos on a ghost hunt. I didn't know that, either, when I first started out.
A nephew took a photo once in daylight, in a haunted mansion in Ohio. When we looked at it using the program he had for showing the photos on TV, there was clearly a woman standing beside a window. However, whenever that photo is transferred by email, the woman is gone. <shrug> She looks real on the original, but like sun flare on the copies. We know she is there, but she's not showing up elsewhere.
I get asked about photos at times, and I try to be as honest, and diplomatic, as possible. However, some of them just aren't paranormal. They can be explained by other means. I don't want to hurt anyone's feelings, so I'll mention the possibilities. And yes, there are possibilities. I can't ever say for certain that it's a paranormal catch or that it's not. Does that sound like I'm waffling? I'm not; I'm just being honest and factual. I stand firm on my belief that the paranormal just canNOT be explained. Ghosts do sneak into a photo now and then. Like I told my nephew, though, I only find something definitely paranormal in about one out of every thousand photos.
There are also supposed hauntings in places that can be explained by irrefutable facts. However, I don't know how many times I've run across people who just will not believe it when I tell them they are not experiencing a haunting. There was one time when a client refused to believe a squirrel was stockpiling pecans from the tree outside her home in her sofa. And yes, that squirrel was causing a lot of other noises and non-supernatural incidents.
Another time, a friend asked Aunt Belle and me to investigate this house while the owner was gone elsewhere, since she didn't want to be there when we were. He said she just knew she had ghosts. We went. It was totally "dead." We didn't even experience one cold chill or sensation of anything at all paranormal. I don't believe I've ever been in a home that was so totally nonhaunted.
I'll be honest with you. When I first started out ghost hunting and evolved into paranormal investigation, there were lots of things that scared me, made me believe they were supernatural. As things progressed, however, the real hauntings and contacts with ghosts and other entities clearly showed me the difference. It took years of experience, though, and that experience is still ongoing.
So if you want to be a truly responsible ghost hunter or paranormal investigator, read and study. Learn from others in the field who are responsible and respectful. Debunk first, then stand behind what you feel is definitely true evidence of contact with the paranormal.
~~~~
Now … drumroll, please! Here is the cover for Monsters Among Us done by the esteemed Angela Rogers. The cover model is the beautiful Mihaela Voicu. Watch my Facebook page for url's to preorder this one on Kobo and Apple. Amazon hasn't gotten to the point where they allow indie authors the benefit of the pre-order button, but I will have it ready to upload and be there on October 1, when it's available on the other e-sites. It will also be up there for Nook at Barnes and Noble. 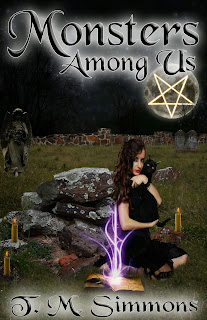 The book is uploaded at Smashwords, waiting for distribution, if you want to take a look: http://www.smashwords.com/books/view/359960
There is a method behind this pre-order madness, really there is. It's not just advertising and whetting your appetite. It's to enhance sales, so I can continue to write the books I love for you to read and also (hopefully) love.
Enjoy! And continue getting hyped for Halloween. Remember, that Veil grows thinner and thinner during October, so communication between the dimensions will get stronger as the month passes.
Boo!
T. M.