It's been another one of those quiet weeks around here that always have me wondering if ghost take vacations. Week before last, when Aunt Belle visited, we had plenty of paranormal activity, including poor Aunt Belle's bruised foot. Even after we did an intense cleansing before she left, I didn't have any trouble sensing the regulars I allow to stay around.
We're down to one bathroom while hub continues to work slowly on the master bath due to his up and down health. Teddy seems to enjoy the company in the guest bath, usually making his presence known frequently. The little lady in the kitchen hovers at times, and I feel her energy. I glimpse Howard just about every time I wander through the house.
Or … I had been seeing and sensing them all. For the past two days, my ghosts seem to have been resting or on vacation or … something. Periodically, they do disappear, and it always gets me to wondering.
Maybe Teddy is tired of us intruding on "his" space numerous times a day? Maybe the lady in the kitchen isn't real happy with what I've been cooking lately? Now, I admit, with trying to finish the new book and the turmoil of the work in the bathroom spilling over into the rest of the house, I haven't lit the stove much. Plus we seem to have a problem with the oven, and since it's a gas stove, I've been using other appliances until either hub or son can check it out. Still, I didn't think the kitchen lady judged what I cooked.
There's no way to figure out Howard. He's such an independent ghost. I've quit arguing with him about crossing into The Light. He just repeats that there's no one over there he wants to see right now. Still, it's odd not to glimpse him at least once a day.
The one who is still plainly here is Martha, the ghost in my office. She appears to enjoy my writing, and she touches my hair or lays a hand on my shoulder often, especially when I write something that rather pleases me.
Maybe when I'm done with this book, I'll sit down and see if the ghosts will join me in a gab fest, ask them where they've been. Or maybe not. After this book, there's another one waiting to be finished, then another….
~~~~
I should be able to show y'all the new cover for Monsters Among Us next week on Facebook. Angela's tweaking it right now. She's a perfectionist, and her work shows it. I'm so lucky to have her doing things for me. I love the beautiful cover model she found from Romania.
Shhhhhh. Don't tell. Here's a sneak peak: 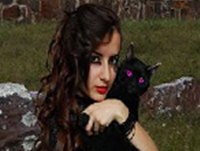 I plan on getting the book up there for pre-orders soon, hopefully, again, one day next week. Amazon won't let me do that yet, but I'll get the Nook, Apple, Sony and Kobo links as soon as they're available, here and for y'all out-of-U.S. readers. That way, you can have the book as soon as it's available on those e-readers. I'll upload the Amazon one September 30, so it will go on sale October 1, also. I'll be sure and let you know the links on Facebook and in my blog. You can count on that! Then it's back to Silent Prey. I also have to start thinking about my annual Christmas story, and I'm already doing some research for Dead Man Ohio (cool reading about paranormal lore, natch).
Tuesday evening, September 17, I'll be on Tammy Rosenfeld's Sisterhood of Women in the Paranormal internet radio show on DTM Wicked Radio. The show airs at 5:30 p.m. my time (in Texas) but 6:30 Eastern. Tammy's the founder of Salt City Paranormal Investigations in the state of New York. I've been friends with her on Facebook for a long while, and her group is one of those responsible and respectful teams. There will be links on my Facebook page and Tammy's to get you to the show.
Angela and I will be going to FenCon in Dallas the first weekend in October. We plan to have a table there from noon until 2 p.m. on Saturday, but the rest of the time, Friday night through Sunday morning, we'll relax and de-stress. Oh, and soak in all the parties and fun.
Another SRT member, Amanda Guzman, is hoping to be able to join us at least part of the time, and Floyd and Sarah Bridgon will be there corralling all the tiny folks so their parents can have fun. (We're hoping next year the Brigdons let someone else babysit and come party-prowling with us.) Carl Smothers, who's a member of our critique group, will spend at least Saturday there. So I'm looking forward to the fun and conversations.
Busy, busy, but it makes the time pass quickly until ….
Halloween peeps over the edge of the calendar!
Boo!
T. M.