I didn't add this in last week's blog because I was still thinking about it. But after talking to Aunt Belle, she insisted that yes, we do have to come clean on everything that happened the day she went home. Looking back, I think she was pretty darn glad to leave this time.
What I'm telling y'all now is what happened just after my Dobie, Bonnie Blue, was attacked or bothered or whatever happened to her. I was still angry, but before I went to get my satchel of cleansing supplies, I detoured to the kitchen to refill my glass of ice tea. From in the living room, I heard Aunt Belle say, "Oh, my gosh. Hey, I need to show you something!"
I started back in there, but she was already in the dining room. She pointed down at her foot.
"Look at that."
On the top of her right foot was a huge bruise. Not only was it a greenish-blue, but it was also swollen. 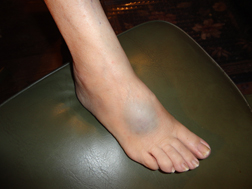 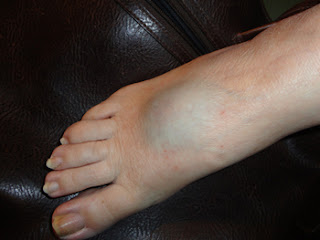 "Ouch," I said. "What did you do?"
"I didn't do anything," she insisted. "I didn't feel anything happen, and I only noticed this bruise when the strap on my Croc rubbed against it."
I looked at her in astonishment, not sure what to say. But she said it for both of us. "One of the damned ghosts around here did this."
"You ready to cleanse?" I asked.
"We haven't started yet?" Aunt Belle said.
Immediately, I got my satchel. Then, as I related last week, we did the entire house, slowly and carefully. Yes, that one ghost, whoever he was, tried to slip behind us, but as we always do, we caught him and ran him out the door. Since then, my house has been quiet, and I followed up with Aunt Belle a couple days after she got home.
"That bruise was totally gone the next day when I woke up," she told me.
"How could that be?" I asked. "That thing was huge. It should have taken days to heal."
"Well, it was gone," she said. "Not one sign it had ever been there. But there was something else. On my foot was a red spot. And it started swelling and making me sick."
"Oh, no."
"I'm pretty sure it wasn't paranormal," Belle said. "I think I got bit by something. We've seen both spiders and scorpions in the house recently. I called Shari (her daughter) and she came over. She said there were two tiny holes, so it was probably a spider. I thought I might have to go to the hospital, because it was really making me sick. But I took some antibiotics and it's doing fine now."
"Good lord," I said. "At least it's something real you can treat."
"Oh, we treated that darn ghost," she said adamantly. "It is quiet there, isn't it?"
"Totally peaceful," I said. "Oh, the regulars are here. We told them they could stay if they behaved. Teddy's here, and Howard. The lady in the kitchen. But the animals are fine and Barney and me."
"We get into some weird crap, don't we?" she said.
"We sure do."
I still have no idea who … or what … was here, because I didn't take time to try to identify it. I can also assure you the picture and information are real. Aunt Belle's foot was uninjured when she got up that morning. She did not bruise it in any way. With a wound that large and deep, she would have definitely felt the pain. She did not.
We just get into some weird crap when the two of us are together.
~~~~
Once again, I've been working on Monsters Among Us. I'm heading down the last stretch. It's all there in my mind now, and I love the ending. I just have to get it down for y'all to read and enjoy.
In the meantime, SRT is planning a cemetery prowl this month, probably next week. I haven't decided whether to go to one of our old standbys or a cemetery I visited a couple times years ago, where I encountered a large ghost dog. My SRT crew hasn't been there yet. For a while, word was it was off limits to paranormal investigators, but I have heard lately it's unlocked again and investigators allowed in. I hope the information is true.
Take care and stay safe. Around the first of October, the Veil will start thinning. You can expect a lot of activity between the dimensions. Not all of it will be friendly, so be careful.
Boo!
T. M.