As Aunt Belle says, "It's not Dial-a-Ghost, folks."
We headed off for a road trip, something she and I have missed for several years due to demands of our spouses and  their health. We had a few narrow misses, thinking we might have to cancel our longed-for trip, but one day we looked at each other across the car seats and yelled, "Yippee, we're on our way!" And we were.
We assumed we'd run across some ghosts on the way or, at the least, during our planned tours of a couple old southern mansions. It wasn't until the fourth day into our trip, however, that we were able to head out of Myrtle Beach towards Charleston, SC, which is one of the oldest cities in the U.S. It should be inundated with ghosts, right?
There didn't seem to be any activity at the first place, Hopsewee Plantation, which was the home of Thomas Lynch, a signer of the Declaration of Independence. Yes, it's a Native American name, but I've forgotten what one of the employees told me. My friends Sharry and Esther toured the house, but Aunt Belle and I only prowled the grounds, then had tea and scones in the little shop while we waited. 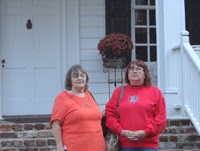 The second mansion was Drayton Hall, quite a distance north of Charleston. What a fantastic place, and the family history is awesome. One of the Drayton descendants owned the home until in the 1990's. She kept it original, with absolutely no modern amenities, including running water or electricity. When she died, she willed the house to a historical society, which has kept the dream of authenticity alive.
The brochure says Drayton Hall is: "The oldest un-restored plantation home in American open to the public. Drayton Hall stands alone as the only authentic survivor of the Ashley River's colonial past — intact and in near original condition."
Yes, you read that right. It's from Colonial Times, pre-Revolutionary War. How fantastic, although Hopesewee was also from the same era. Drayton Hall is probably the oldest plantation Aunt Belle and I have ever toured. There are no furnishings in the home, which makes it different, of course. It was a totally awe-inspiring tour, imagining the family living there.
Ghosts? None in the home. However, a lady "met" me at the ticket booth when my friend Sharry and I got out to buy our tickets. I knew she was female, but the ticket lady told us that if we didn't hurry, we'd have to wait and catch the next tour, an hour later. So I didn't get to hang around and chat with the ghost. I did realize who she was as the tour progressed: the Drayton descendant, Elizabeth Drayton.

From the Drayton Hall Website
www.draytonhall.org
I have a theory, which is all anyone has about the paranormal world. I believe that houses where Aunt Belle and I encounter several ghosts are houses where there have been unpleasant happenings and unhappy people over the years. Therefore, my deduction as to the lack of activity at Drayton Hall is, of course, that it was a good home for the families who occupied it down through the generations. Elizabeth felt perfectly content when I sensed her energy, and the vibe I got was: Welcome to my home. I think part of that, also, was due to her seeing that the family vision of the home was still being carried out.
I wish I'd had time to check out some of the ghost stories that my friend Billy Thomasee sent me. However, the trip was also for business purposes, and I attended the Novelists, Inc., conference on Wednesday evening through Saturday evening. I met a lot of author friends and made some new friends in the book industry.
We had a couple ghost incidents here at the house just after we got home, but I'll hold those until next week's blog. My husband was still down in Houston visiting his sisters, so after Aunt Belle left, I was here all by myself Wednesday and Thursday night, Thursday being Halloween, of course. Weird, though. Nothing happened here after Aunt Belle left on Wednesday morning. My nights were peaceful.
Would you stay alone in my house? I met a couple people in Myrtle Beach who gave me a resounding NO, NO, NO! But I enjoy myself immensely, whether my ghostly residents pop in or stay on their side of things.
Final note: I'm reworking the blog site, so hope to have lots more information up soon. So far, I've only had time to do the bio section, but by next week, I intend to have the site full of interesting tidbits. Best laid plans of mice and men, though….
Hope you had a fantastic Halloween or Samhain and stayed safe.
Boo!
T. M.