It's not always spy-a-ghost at the Simmons household. This past week was about as quiet as it gets around here. Oh, I caught glimpses now and then of my resident ghosts. The little lady in the kitchen was there a few times, and of course Howard never lets me forget he's around. However, one thing that happened is something I'm not even sure was paranormal. It was along the lines, though, of some of the incidents in my life that I have been certain weren't exactly realistic.
I mentioned a few months ago that I got another car, which I call Heidi the Hybrid, because she's a Ford Cmax hybrid. I don't have a key for Heidi, just a little black box thing that I think they call key-less entry. It has a lock and unlock button on it, plus it has to be close to the ignition button in order for the car to start.
After <mumble,mumble> years of driving, I am not used to there being no key to stick in the switch or pull out when I get out of the car. So … yep, about three months ago, I lost one of those little black boxes. We looked and looked, but couldn't find it. It also had other keys on it, of course, like my house key. One thing I didn't do at that time was ask my ghosts to help, like I do for other things. Instead, I started using the other set until I got around to calling Ford and getting another one … which hub assured me cost several hundred dollars, so I wasn't in a hurry.
A weird thing, though, was the car would still start even if I forgot to bring the other little black box out to the car with me. We discussed that and came to the conclusion the keys just had to be somewhere in that car. After several more fruitless searches, we gave up.
Last Monday we were driving back from our son's in Houston. I stopped about three-fourths of the way home to get gas and do some shopping. I turned off Heidi, then noticed I didn't have my set of keys with the little black box on it. We searched and searched and couldn't find it. Oh no! But I pushed the ignition button, and lo and behold, Heidi started.
Long story short, we were pretty stressed and also trying to figure out how to get into the house. Our other son near us had a key, but he was working long hours and it would be well after dark before he got home, we thought. The son we were visiting called and asked how we were driving the car.
"Why?" I said.
"Because your key ring was in my bathroom. I have it here."
On the way home, in between all the phone calls between sons and daughter-in-law, we stopped at a MacDonald's. Hub had his arm out the window, and a darned bird crapped on him! We almost died of hysterical laughter, which at least lessened the stress.
And on the way home, I finally asked my guides, angels and resident ghosts to help me find the other set of keys, if it was in that car at all, which it had to be. Hub ended up forcing a door open on the house, and after we unloaded, I tore into that car again. I found a hole beneath the back seat that I had no idea was there. I reached in, way in, far back, almost to the hatchback area. I felt a set of keys!
So, was it paranormal? Did my ghosts, angels and guides help? There is absolutely no way that key ring could have fallen out of my purse and gotten where it was. There's about a four inch lip on the front of that access hole. The seat fits tight, and they couldn't have wiggled between the crack. But there they were, after I had asked for help. I'll let you decide, but I know how I feel. There have been dozens of times something lost showed up around my house after I asked for help locating it.
~~~~
This past week I also accomplished something I wasn't sure I could do this year: I finished my 2013 Christmas story. I even came up with a name for it: Upon a Midnight Clear. Maggie Mae owns a home for children, but she has a special gift — powers which are illegal in her time. Kyle has his own hidden secrets, which, if found out, will mean his death. I hope my readers will enjoy their visit to a time that's both past and future.
Angela is working on the cover, so it will be next week before I upload this new short story, especially since it's icy here in Texas and her internet is out. I'll be sure and let everyone know. Sorry it's late this year, but life does interfere sometimes.
I did find my romance, Tennessee Waltz, made it free in Canada. Yippee! So Canadian readers, go grab a copy, if you like sweet romances: 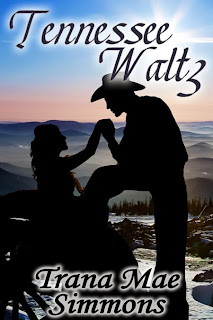 I hope everyone is enjoying this wonderful season, getting their shopping done (I love shopping!) and looking forward to friends and family for Christmas. It's too cold in Texas right now for my group to hunt ghosts, but we'll get back at it soon.
Stay safe, and ….
Boo!
T. M.