After a couple fairly quiet weeks, my ghosts decided to get a little more active this past week. I have no idea why some days I have quite a bit of paranormal activity, then other days it's … uh … dead. I don't think there is ever a day that actually passes around here when I don't at least sense one ghost, usually either Martha, here in my office, or the little kitchen lady whose name I don't know. And I do see Howard at least once or twice a week. But out-of-the-ordinary happenings aren't that frequent.
Wednesday, I actually made some notes so I wouldn't forget any of the several instances. First, I was in the kitchen and the overhead lights went out. Now my son does that once in a while, so I turned around and said, "All right, quit that, Kelly."
No Kelly there, and neither was hub. I walked to Kelly's bedroom and opened the door. There he was, feet up on his desk, playing with his tablet. He informed me that no, he hadn't been in the kitchen at all. I checked in the bedroom, and there was hub, lying down watching TV. So….guess it was a ghost.
Our house is old, and I need lights on even during the day at times. I turned the kitchen lights back on (yes, the switch was flicked off), then went over to the sink and turned that overhead light on. Nada. It was burned out. Later, I asked Kelly to change the bulb over the sink. He came out and flicked the switch.
"The bulb's not burned out," he said. He was right! The light was burning.
But later that evening, when I tried to turn that light on, it was out again. It's been months since we changed that bulb, and it's one of the new energy saving ones. I don't think they go off and on like that before they actually burn out. And there's a cover over the bulb, plus it's up high, so no one knocked it loose. Ghosts? Kelly will have to check it again, and this time, I want him to take off the cover.
I think I debunked this one, since the sink light is now completely out. So I'll have to give you another story, one I wanted to add anyway. It's the last one in the ghost story portion of my blog. The next one is still from Wednesday.
Later that day, I was reviewing an evidence tape from the night my crew member, Floyd, and I went out to Dry Creek Cemetery. It was only the two of us on the tape, since no one else was able to make it. I had the sound turned up fairly high so I could catch any EVP's that might have slipped in. I didn't find anything at all, and a few minutes later, I was walking through the house. Hub was in the dining room, and he asked, "Where did Floyd go?"
"You only heard him on the tape I was reviewing," I said.
"No," he denied. "I did hear you two talking, and I came in to see what you were doing. There was a man sitting on the couch. I assumed it was Floyd, so I left you alone to watch the tape."
I'd been perched on this old trunk that we made into a coffee table, close to the TV, listening for EVP's, so I had my back turned to the couch. "Floyd was not here," I assured hub. "You must have seen a ghost. Maybe the new guy, Dan. Did he have on a black and white plaid shirt?"
"Nope," he said. "It was a pure white shirt."
"Maybe Howard, then," I said.
Still on Wednesday: I have this set of redbirds that Kelly bought me for Christmas one year. There's a switch that activates a little motion detector, and when people walk by, the birds will tweet. They hadn't been turned on for a while, but a couple days ago, Kelly flipped the switch on. Since then, whenever one of us walks by, we get tweeted at … except those birds sometimes tweet when there isn't anyone near them or passing by that motion detector.
They're on a shelf in the little hallway that goes into our master bedroom, and that's where I see Howard a lot, so it's probably him. I imagine if Howard gets tired of them announcing his presence all the time when he goes back in there from his roaming around, he will turn them off himself. For now, I've given up looking that way in the house to see if son or hub has walked past. Sometimes there's no one visible at all, but, "Tweet, Tweet." 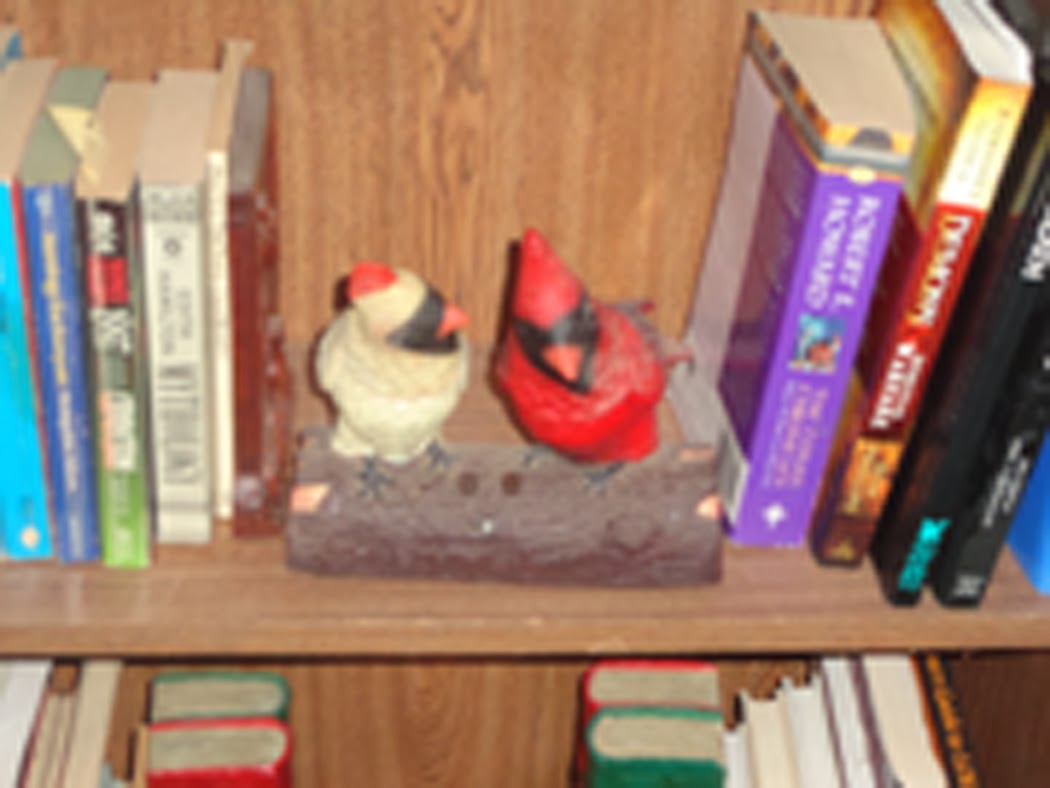 I put the photo of the birds here to orientate you to the last story. On Thursday night, I walked into our bedroom, which is just to the right of this little hallway.Kelly was on the laptop at hub's desk just inside the bedroom door, and I bypassed him to put some stuff in the basket by the shredder.

"What's that?" he asked.
"Shredding," I said, just as someone else said very clearly, "To be shredded."
I glanced over, but hub was sound asleep with the TV on. I had heard this very clearly, and I asked Kelly, "Did you hear someone say anything?"
"Just you when you said shredding," he answered.
"You didn't hear someone else say 'to be shredded'?"
"Nope," and he went back to whatever he was doing on the laptop.
About that time, those birds started tweet-tweet-tweeting like crazy, and there was absolutely no one in that hallway. I also heard someone chuckle, so it was probably Howard. I was in the middle of a huge pile of filing, so I didn't take time to chat with whoever it was. But it was one of the clearest communications I've had from the paranormal world, and it was definitely a communication: an answer to Kelly's question. Way cool!
~~~~
Dead Man Ohio is really rolling along! If it turns out to be about the same length as the other Dead Man Mysteries (100,000 words), it's already one-fifth finished. Since I'm a seat-of-the-pants writer versus some authors who plot things out, I never know how long the book will be until the story actually ends. I'm having so much fun writing it! That's part of not plotting it out; I get to enjoy the story, too, as it emerges from my mind. I actually enjoy writing fiction more than I do writing up the ghost hunting diaries. In the diaries, I stay true to the facts; in fiction, my muse and I can prowl through all sort of trails and pockets in my mind. Alice, Twila, Granny, Trucker, Miss Molly and Jack (of course) are in Ohio, and there are all sort of new ghosts and other things for them to deal with. Poor characters! I give them so much trouble.
Angela's coming over Sunday for a "photo shoot." She wants me on the cover again of Living With Dead Folks, Volume Two. So I need to get the manuscript of my 2013 blogs ready for its new cover. That's "work," though, and I'd so much rather write fiction. Oh, well, them's the breaks in the life of an author.
After the "shoot," my crew is gathering to watch Dave Juliano's 'The Dark Side of Paranormal Research Class' again. I watched it once before, but bad weather kept the rest of the Supernatural Researchers of Texas crew from joining me. This time we should all be together. I keep urging everyone to learn about the dark side of paranormal research to protect yourselves. In fact, I've also signed up toe Dave's Psychic Protection Class in a couple weeks.
Frankly, we very seldom run across anything negative out there, i.e., a demon or devil. Most of the time, we interact with ghosts or positive spirits. However, for those rare, infrequent times we do encounter something evil, we end up in highly dangerous situations. For my part, if at all possible, my crew and I are out of there when that happens. I do want to understand how to recognize things like that, though, both for my own protection and that of my crew. I also want my crew to be aware of the dangers we can encounter and what we can do to protect ourselves.
And, if I have to, I want to be well-versed on how to deal with these negative entities long enough for us to get the hell out of there. It's not fun and game; it's a real dimension and real entities. So be careful out there. 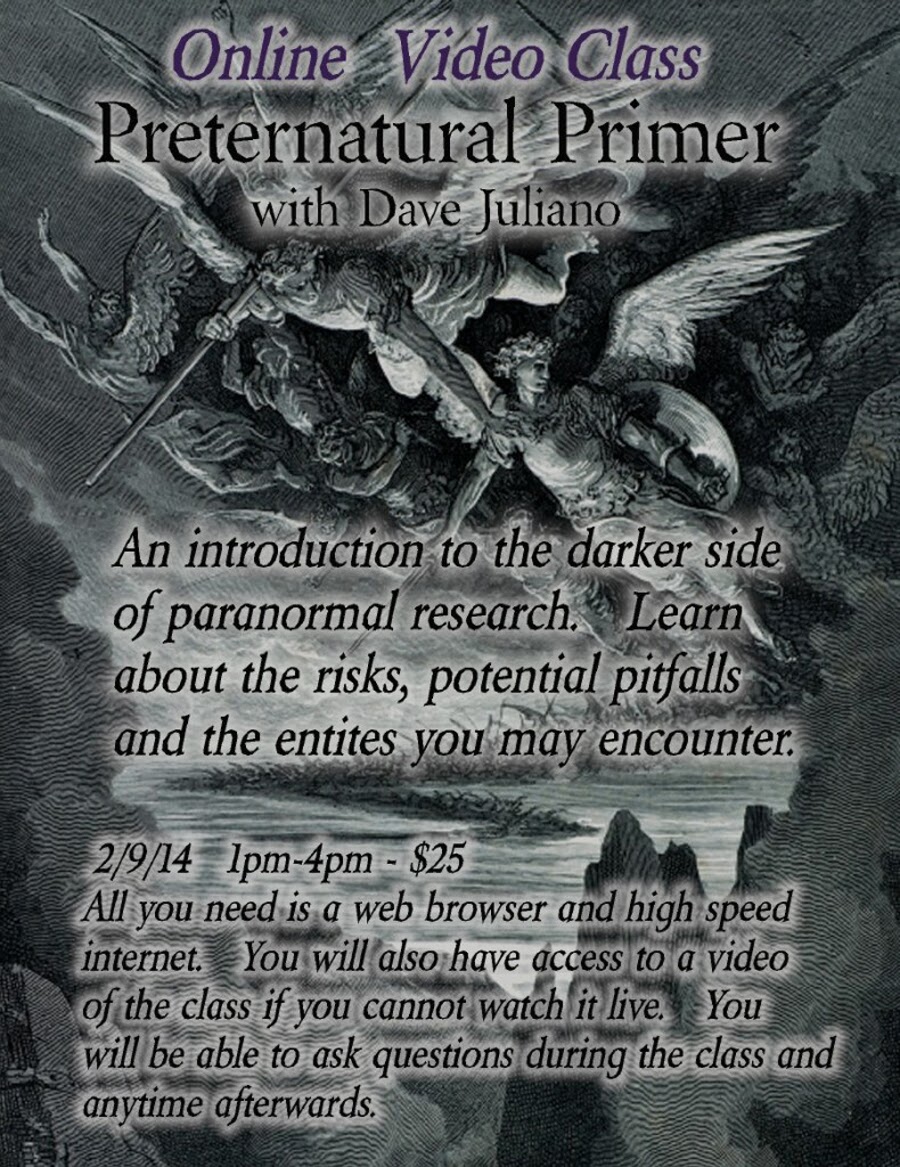