Ghosts in the House

This was definitely not a quiet week ghost-wise in the Simmons' household, even though so far there have only been two incidents.
I don't say much about my personal life in here, but one incident is so specifically tied to a paranormal experience that I have to explain. Hub has some serious illnesses, which include COPD and emphysema. He has been diagnosed since 2004, and been in the hospital as many as six times some years. He's had double pneumonia twice and pneumonia and bronchitis serious enough to put him in the hospital many other times.
The thing is, his pneumonia can come on really fast. He can be fine and an hour later, have trouble breathing. That's what happened Sunday night around 11:00. I was up most of the night with him, and we were able to stave off going to see our doctor until morning. But I don't think it was without help.
He has his own hospital bed, and I got him settled down, then laid down in my bed next to his. I was reading on my Kindle, listening to make sure he was breathing all right. Then I glanced over at him. All along the far side of his bed were misty figures. There must have been about a half dozen of them, clear enough to see they were people but not clear enough for me to recognize them.
At first, it scared the living shit out of me. I thought, Omigod. They're coming to escort him home. I didn't know what to do. I'd look away, then back. They remained there for at least a half-hour, and it finally dawned on me that they were there to help him get through the night, rather than to escort him across The Veil when he died. Whew!
With their help, we waited until morning to take him to our doctor, who put him in the hospital for a couple days so he could have IV antibiotics. That always gets him back on his feet. Anyway, it was scary at first, and I'll admit: I kept a watchful eye out for the rest of the night!
His doctor decided to keep him until Wednesday (which is the day I'm writing this). So I was alone here at home Tuesday night. I had our Dobie, Bonnie, on one side of me in the bed, my cat, Smudgin, lying beside my head on the other side. Bonnie and Smudgin will share a bed, but not both on the same side. They get testy with each other.
Anyway, Bonnie got up around 3 a.m. to go outside through the doggy/kitty door and take care of business. She woke me up when she got off the bed, of course. She's nearly 13, and can't get back up on the bed herself, so I was lying there waiting for her to return. I was on my right side, near the edge of the bed.
I felt something nudge my back, really  hard. I jumped, thinking Bonnie had sneaked back in, but knowing I should have heard her toenails on the hardwood floor. Still, that's what Bonnie does if she thinks I'm asleep: nudge me hard on the back. I reached behind me, thinking maybe Smudgin had gotten up and wanted under the covers, since it was a rather chilly night. No, Smudgin was still up by my head, and my hand encountered … thin air.
I turned over fairly fast, and there was nothing there. But I'd definitely felt something nudge me hard. About then, Bonnie came click-clicking across the floor, ready to go back to sleep. I got up and helped her into bed, and stared all around the room, but didn't see anything else. I keep a couple lights burning when hub isn't home, in the bathroom and hallway, so I could see fairly well. Nada in there except me, my dog, and my cat. Huh.
Maybe one of the spirits in the bedroom was making sure I didn't fall asleep until Bonnie got back. Donno.
~~~~
So this was a very slow writing week, although I did finish one chapter on Dead Man Ohio and start on another one. I also took Angela and her daughter, Hannah, over to my son's "farm" to take some pictures for the new cover of the book. Hannah had a ball petting all the animals. Son has three chickens we call the Dixie Chics. He has three huge Mastiff "puppies," which are really still puppies. Seven months old, they all weigh nearly a hundred pounds. Hannah also got to meet LeRoy the Snake, a boa constructor about three feet long, the mama cat and her five kittens, Daisy Duke the Ferret, and Miss Lily Piggy, a potbelly pig.
One of these will be on the cover of the book! I'm not allowed to tell you which one, though, until we do the cover reveal. I will show you Hannah petting LeRoy, who is curled around hub's arm: 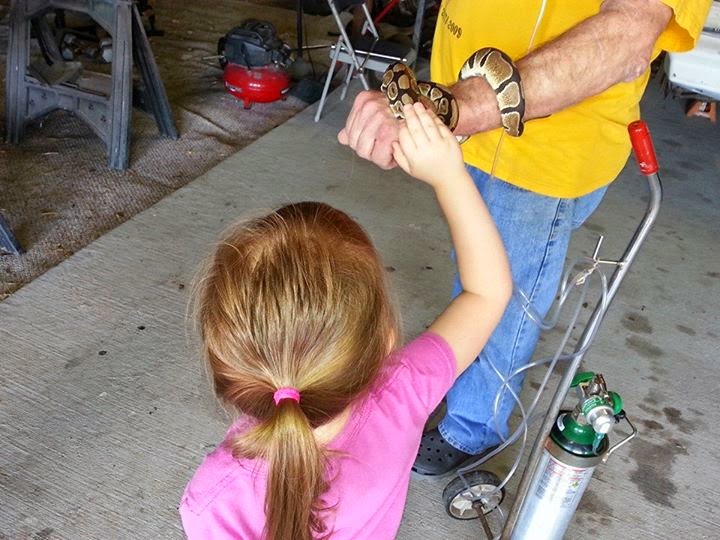 I'm heading out to the Granbury Paranormal Conference on Saturday, and then staying overnight at the Nutt Hotel, which has a really good haunted reputation. Plus I'll go on one of the ghost tours that evening. A fun day coming up!
Y'all stay safe, and ….
Boo!
T. M.