Do Ghosts Get Tired of Us?


This has been another quiet week at the Simmons' house; at least, nothing out of the ordinary. A week never does pass when I don't feel a few of my paranormal boarders. I'm still waiting to find time to chat with the new ghost, Andy, and twice I sensed paranormal energy that I attributed to him. Andy's a fairly strong ghost. It will probably be interesting when I do communicate with him. However, it's not Andy's time, so I get to choose my subject this week.
The lack of unusual activity hasn't been because I stayed away from supposedly active places. Two weeks ago, hub and I went to the Granbury Paranormal Conference and stayed overnight at a haunted hotel in Granbury. The conference was great, and really, so was the stay at the hotel. As far as confirming that the hotel is haunted, though, I was a little disappointed. I took along the flashlight I use to communicate with ghosts, my new KII, and also set up Anna Lee, my doll trigger object.
The flashlight blipped a few times, but nothing else happened. I finally turned it off and went to sleep.
Which leads me into my subject this week. I've heard so many people shiver and say how haunted such-and-such place is, yet when I got there, practically nada. It has happened when I go with Aunt Belle, also, and I've started to believe that a haunted place can become, from want of a better word, commercialized. I suppose if someone is easily impressed or frightened, any little bump in the night will make them believe they'd encountered a ghost, but I rather expect something more than a few footsteps or a light that comes on in the middle of the night. And many times, that's about all I experience at a lot of those famous haunted B&B's or hotels.
However, there could be another cause of this, and I lean towards that. I think the ghosts get tired of "scaring" people. They also probably get utterly sick and tired of people taunting them or griping about not getting scared, demanding the ghosts show themselves. I have overheard many conversations when people complain about the lack of ghosts popping in and out during their stay. I've also had people demand that I show them a ghost, when they find out who I am. You can imagine how I respond to that, and I'm not normally a rude person. However, rudeness tends to trigger rude responses. Over the years, I've found myself tending to stay away from commercialized haunted establishments.
I truly believe some places have the right idea when they protect their ghosts and don't allow inexperienced and rowdy "ghost hunters" on the premises. This is going to be one of the firm rules at the Beckham Hotel, and I don't feel sorry for anyone who breaks it.
There's also the possibility that I have just been to some of these places at the wrong time. If you've followed me in here, you'll notice how many weeks I report as quiet here. However, there are never any totally inactive weeks. And too, the flashlight did blip a few times at this latest hotel. Maybe the ghosts were taking a relaxing break … wherever ghosts relax.
Hub and I did enjoy prowling the cemetery there. This is where the "second" Jesse James is buried. There was quite a controversy a few years ago over whether or not Jesse was actually killed, or whether he escaped and took on a new identify. Many in Granbury, Texas, believe their grave is the true Jesse; others in Kearney, Missouri, believe Jesse lies there. Here's the photo of the Granbury grave: 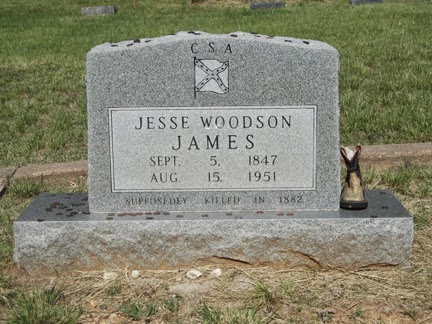 On the other haunted hand, two of my team members and I, Sarah and Floyd Brigdon, went out to one of the cemeteries near Mineola, Texas, the town where the wonderful Beckham Hotel is located. I've also stopped naming the cemeteries that I visit in here, because friends and I have noticed that sometimes those cemeteries experience vandalism after we give out their names. So you'll have to be satisfied with a vague locations. We had three flashlight, Anna Lee and the KII. The flashlights hardly ever stopped "talking" to us, and we identified some cool ghosts to talk to. Floyd even helped a few cross over. So there was that this past week.
I'm posting these two specific pictures for a reason. In the first one, Floyd was feeling some intense paranormal energy, and he was starting to get some communication from this specific ghost. I snapped a picture of him and at first thought we had captured some of the energy around him. At Sarah's urging, I took a second picture without him in it, for investigative purposes.
Well, we'd forgotten someone was burning brush just over the hill from where we had set up. Therefore, all the "mist" you see in the photos is actually smoke. I'm putting these up as debunked photos, and to show you what you can capture on your digital. We didn't see a bit of this smoke with the naked eye, but it showed up on the pictures. 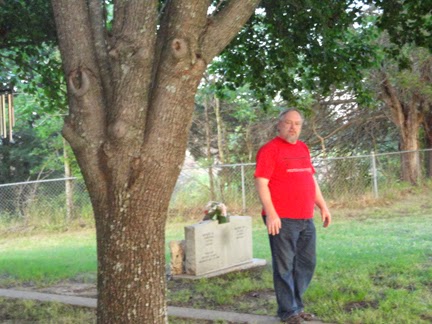 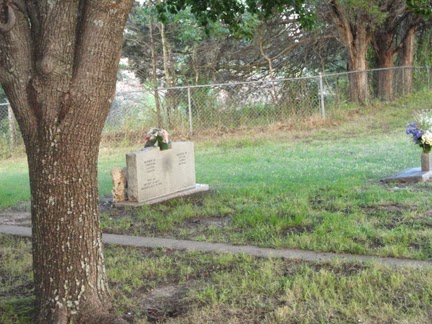 On our way to the cemetery, we were also able to stick out heads in at the new Taste Buds restaurant, which is moving into their new home beside the Beckham. It's going to be awesome! Darlena was waxing the floor, so we didn't dare venture any further than our heads inside the door. Julia did take us up to the Ballroom, and we were able to see another improvement there: curtains on the windows. Way cool! It's such a gorgeous room.
I dropped off some Aunt Belle's Birthday Bash flyers on my second Mineola trip this past week (Saturday), and we lucked out and got to talk to Connie for a few seconds. She was on the run, as usual, working so hard to bring things together. I'll be making one more trip out on Monday, then things should be on track for the Birthday Bash. What fun! Hope you have your reservations made.
I did fit in some work on Dead Man Ohio. What a fun book this is turning into. I can't wait myself to see how it turns out.
With the weather being conducive to outside activities, we, of course, try to fit in as many ghost hunts as we can. But please, if you do them in a cemetery, honor and respect the graves and grounds. Frankly, that goes for anywhere you go. I hate to be secretive about the places where I investigate, but I want no part in being a tool for vandalism. I've also noticed a lot of vagueness on Facebook about where other paranormal groups go. It's to bad, but human beings are not always nice people. It makes a paranormal investigator wish we really could send out ghosts out to wreak revenge.
Stay safe, and….
Boo!
T. M.