Messages from Our Guides


Somebody please tell me where this week went! I think all I had time to do was grab hold of the hours, minutes and seconds as they streamed past me and hope I could hang on. I guess even my ghosts decided they better stay out of the way, since they've remained quiet again, except for the brief sensations that tell me yes, they are still around.
So again, I get to pick my own topic, and it actually is something I've been thinking about for a long while. Do I have any answers? Nope. It's one of those things in the paranormal that happens sometimes, sometimes not. No rhyme or reason to it at all, except the constant message that we need to listen and learn.
I'll admit it: there are days on end when I don't meditate. Since I'm not teaching my class right now, my crew members admit they are lax, also. I never have been one to seriously meditate and ask my guides to help me solve a problem. Not that they wouldn't be happy to help. They always are, when I do stop and think: Oh, this is something maybe my guides could help with. I guess as the oldest child, I'm used to making decisions and going ahead. Given my schedule, it's usually bedtime before I do get to chat with my guides about something serious, or when I wake up in the middle of the night and things are quiet around here. I hardly ever leave without at least an inkling of which way I need to go.
Other times, my guides drop hints about how something is going to work out, and I'm supposed to pay attention. However, nine times out of ten, I don't understand what they are telling me until after the fact. Aunt Belle is the one with a measure of precognition, and that's something I'm glad I don't have. However, these messages I get aren't exactly what people think of as precognitive messages.
Like just this week. I had it all planned out. Monday, Tuesday and Wednesday were packed full. But yippee! I had Thursday and Friday to write. I was so looking forward to those two days. Unfortunately, I must have done something that gave the Universe permission to laugh at me and say, "We'll show her!"
Thursday morning, hub was having some problems, so we had to make an unscheduled trip to the doctor. That afternoon, with him on the mend, I settled down in front of my computer. The phone rang, and for the rest of that day and until this upcoming Wednesday, I'm chasing time again. Yet the call on Thursday afternoon was exactly what I'd been hearing in a message from my guides, yet had gotten all wrong.
The man on the phone was a friend, George Jones, of Jericho Tours in Tyler. I met him at the Tyler Paracon, which was an event he had planned. George is turning into a good friend. He offered to help my team and me with our Beckham Spirit Fest in October, and I agreed to be on a writer's conference panel for him. He, of course, wanted to see the Beckham, our conference venue, so he could get a handle on what he could do best to help us out.
When we were finally able to get into the Beckham, I showed George around, and he was able to visualize how much Connie Meissner had already done. He also saw just how much there is left to do, and although I didn't know it, George started chewing over how he could help the hotel. That hotel can grab you, believe me, and make you care deeply for her.
I'd been doing quite a bit of chewing myself, and had a couple things in the works, one of which was Aunt Belle's Birthday Bash. We are already looking for publicity for the hotel even though the rooms aren't ready yet. My guides kept telling me there was a TV show in that gorgeous historical building, and I was working in one direction toward that.
Well, when he called me, George had Bob Mauldin with him. Bob owns 31-West Productions, which produces Expedition Texas. Bob wanted to take a look at the Beckham to possibly film it for an episode for his show. Imagine that! Here I'd been going one way for months, thinking I knew what my guides were talking about, and it came at me from a completely different direction, from some super-nice people I had just met. So before long, I'll be able to shout out when the Expedition Texas show about the Beckham will air, since Bob will start filming in the next few weeks. You can also go to the Expedition Texas Facebook page https://www.facebook.com/ExpeditionTexas and keep up with things, as well as on George's Jericho Tours page https://www.facebook.com/JerichosToursOfTyler. 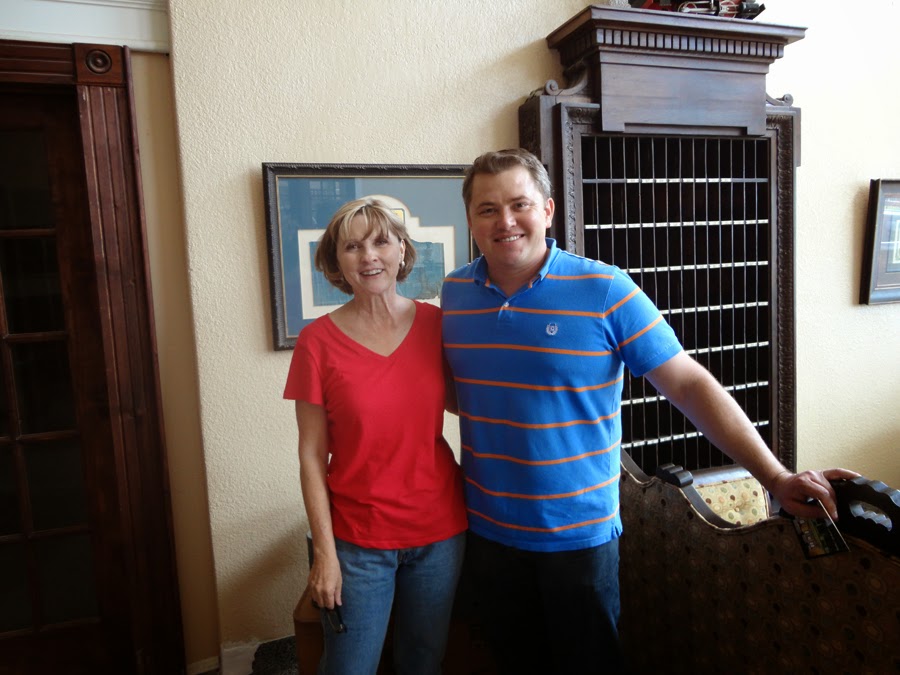 Connie and Bob Mauldin
So sorry no actual ghost stories this week, and not much writing progress. Still, a week that had some very nice events in it. I will tell you this about me. I was so excited about meeting Bob, I actually put on makeup Friday morning. Guess what we did? We walked through all the dusty waiting-to-be-renovated areas and crawled under stairwells! I put on makeup for that? Yep, but it was exciting fun. I found a couple places I hadn't known existed at the Beckham.
Stay cool and….
Boo!
T. M.