It was still a slow ghost week here in my house, with only one outside-the-norm incident to tell y'all about. I was lying in bed one night, getting ready to drift off into welcome sleep. Suddenly something popped me on the toe, bringing me straight up out of bed.
For an instant, I thought maybe my cat Smudgeon had leapt off the dresser onto my bed, which she does sometimes, and brushed or hit my toe. However, it didn't feel like that; the pop was like someone had thumped their hand down on my foot. Besides, nothing ever landed on the bed, or on the floor, if the cat had somehow missed the bed. She never does, though, and I didn't see her anywhere. Also, my Dobie, Bonnie, wasn't in her usual place at the foot of the bed, so it couldn't have been her moving around. Believe me, you feel a Doberman when she shifts position on the bed you're sleeping in.
So I muttered, "You do that again and wake me up when I'm trying to get to sleep, I'll fix your butt."
Lucky for me, I hadn't been reading Jason McLeod's Dark Siege that specific night. Otherwise, I probably would have woke the entire neighborhood with my scream. That book is awesomely scary, with its recitation of actual events that happened to the poor McLaughlin family in Connecticut. And the analysis chapters Jason wrote at the end of the story are full of some fantastic, necessary information you need to know before you even think about messing around in the paranormal.
I was able to "meet" Jason on Jill Borel Wilder's internet radio show (http://www.blogtalkradio.com/theinfinitesupernaturalnetwork/2014/06/11/jason-mcleod-author-and-investigator-with-ed-and-lorraine-warren) last Tuesday night. Jill always has a fantastic show on Tuesday nights, and I'll be on it chatting with her as soon as we can work it into my schedule. Also, Jason and Jill share my views on that blasted Ouija board: never allow it anywhere near.
The other cool ghost incident happened when my friend and book cover designer, Angela Rogers, and I went to the grand opening of Taste Buds out in Mineola on Thursday. Of course, we went next door first to talk to Connie Meissner, the owner of the Beckham Hotel. Also a fantastic photographer, Angela wanted to take some photos for some things she has in the works. We prowled the hotel for a while, then settled in the lobby to chat with Connie. Suddenly, we were surrounded with ghosts. They invaded our space so strongly, I had to flick them back somewhat so they weren't overriding us.
I was nice about it, saying, "Hey, y'all. We know you're happy here and just showing that to us. But please back off a bit so you're not crowding us."
They did, and we were able to continue our conversation, albeit with quite a ghostly audience. Angela took this pic of Connie and me in the renovated hotel lobby right after I pushed back the ghosts a little bit. And no, I didn't know my blouse was hiked up <sigh>. It wouldn't be me, though, if I wasn't rumpled somewhere; just ask hub. 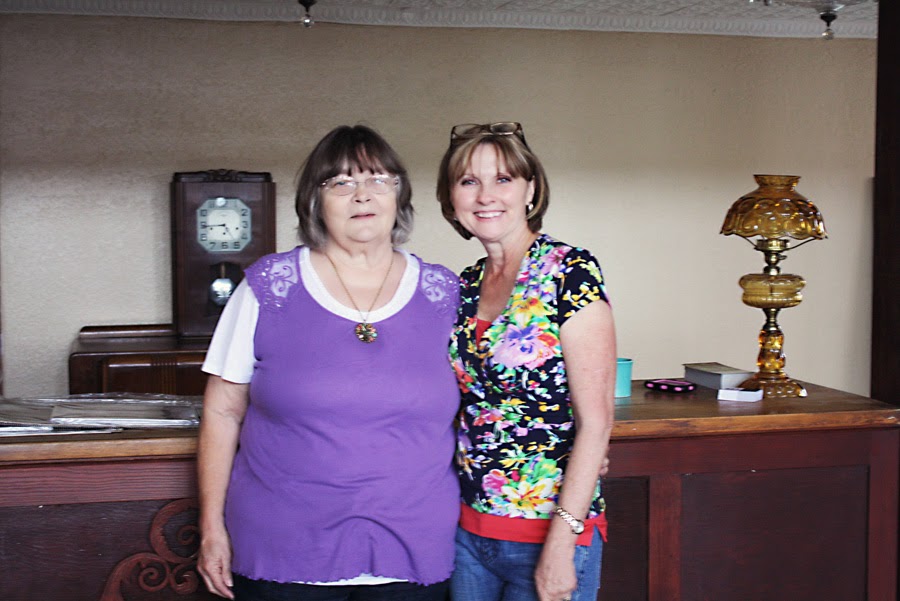 
Connie has also given me permission to work with Selena Roane of Fear Paranormal to set up an overnight investigation on August 23, 2014. The cost will be $50.00 to be included in only the second group of paranormal investigators who have investigated this grand old lady hotel. I chose Selena because she shares mine and Connie's views on how to treat the ghosts. No baiting, no provoking, and be respectful. We've capped the participants at twenty, and the last time I looked, half the slots were already full, even though the word had only been out for one day. If you are interested in coming, you can check on Facebook under events to see if there are any slots left: https://www.facebook.com/events/1383431341917824/?ref_dashboard_filter=upcoming
Aunt Belle is coming in Thursday, so that means the activity here at the house will start to escalate any minute. Fun! It will be cool for some of y'all to be able to meet her in Mineola on Saturday, June 21, at Aunt Belle's Birthday Bash at the Beckham. Y'all come!
~~~~
I got a lot of writing done this week on Dead Man Ohio. And guess what! Angela has the cover done! You'll see it here first in the blog, and I'll post to Facebook in a couple days or so. Here it is. Ain't it priceless? 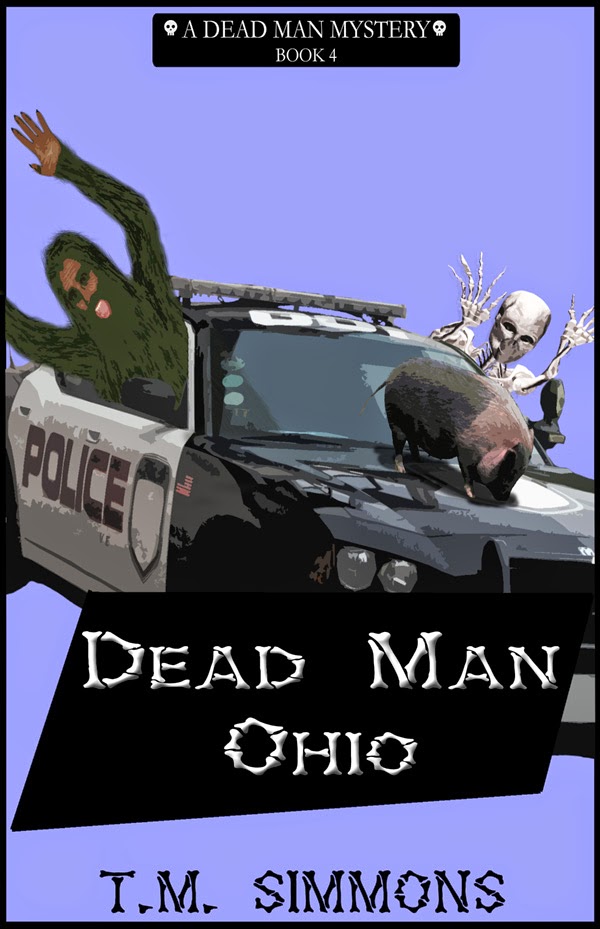 Shhhh. Wanna know a secret? Angela's husband, Jason, posed for the Ohio Grassman erupting from the passenger side of the patrol car. How cool! But he's lots more handsome than that. Angela had to do a lot of work to cover up Jason's handsomeness. <grin>
I'm also planning to be at the Tyler Writer's Conference June 28 and 29. http://toursoftyler.com/writers_conference__workshop. My good friend, LaRee Bryant, and I are giving a workshop on Indie Publishing in Today's Market. LaRee just uploaded the first two mysteries in her Poppy Green Mysteries Series. She has some beautiful covers on those, too. The first book, Poppy Fever, is on Amazon at: http://www.amazon.com/Poppy-Fever-Green-Mysteries-Book-ebook/dp/B00KZA4PCY. She's a fantastic writer! You won't go wrong reading any of her books. The second book is Buttercup Blues.
Wow, lots of links to browse in my blog this week. Guess I have been busy, busy. And lots more writing and fun to look forward to next week.
In the meantime, stay safe!
Boo!
T. M.