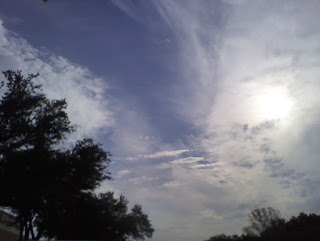 One of these days I'll sit down and see how many "nothing much happened" posts I have in a year. This is another one of those, although as usual, I'll qualify that. A day hardly ever goes by here in my house without me glimpsing an apparition. A lot of times it's just Howard; other times, I'm not sure who I see. So if ghosts scare you, you wouldn't want to spend much time here in my home.
Even more frequent than the glimpses are when I feel paranormal energy. It's usually pretty strong, if I pay attention to it. Otherwise, I slough it off as part of the normal daily activities here. Right now, my office ghost, Martha, is standing on my right side. I can feel some of her energy, and it's a few degrees colder than my left side from my shoulder down my leg. I'm fairly certain it's Martha, anyway. Sometimes Angela's ghost, Alan, comes over to see what I'm up to. He visits on Saturday a lot, since that's usually the day I'm writing my blog, even though I don't always get it up before Sunday. So it could be him; I haven't tuned into whomever it is to identify my observer. 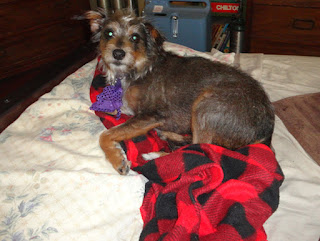 Dancer September 2015
We have a new little rescue dog, Dancer. She's a yorkie/schnauzer/dachshund mix, a little over two years old. When she came to live with us, she wasn't used to ghosts or spirits. I noticed her staring at various places in the house where I knew some of my residents hung out, an expression on her little face that showed both puzzlement and a hint if fear. Since I've been so darned busy writing, my house is long overdue for a cleansing.
One weekend Dancer got really ill. I took her to my vet, Rachel, who didn't find anything seriously wrong. Rachel did give her some pain medicine, since poor Dancer had made the mistake of getting too close to Tuffy a few days earlier, when Tuffy was eating. My son's lab-mix Tuffy is one of those dogs who doesn't like another dog close to his food. He snapped at poor Dancer. She had a bloody ear, and Rachel thought maybe there was some bruising from that encounter. She also gave Dancer a shot for a gastro-intestinal disturbance, because Dancer was hardly eating.
I didn't want to take any chances, so when I brought her home, I tied one of my protection packets on Dancer's collar. She was completely herself by the next morning, except I continued her pain meds for a few days, as well as putting antibiotic salve on her little ear. She seems fine now, and when I do see her look at what might be one of the paranormal boarders, it's just a cursory glance.
So was it the medicine or the protection packet? As I've said before, I don't even attempt to explain the paranormal. It's unexplainable. So whichever it was, I'm glad my little girl is back up to snuff.
Huh. Now someone is on my left side. I'm fairly certain that's Alan. That's where he usually stands, while Martha prefers my right side. Although Angela and Alan live at least a half-mile away, Alan's such a strong ghost that I swear he can zone in on what I'm doing over here, even at that distance. (Well, Angela lives there, and Alan abides with her.)
So that's just an overview of some of the things that go on in the Simmons household even in the "dead" quiet times.
~~~~
I typed THE END on Silent Prey this week! Yippee and a Texas-size EEEHAW! But my readers and I will be putting in a lot of editing time before the book is ready for me to ask someone to pay actual money for it. I want it to be a fantastic read for y'all, and I'm lucky enough to have people I can count upon to help me made that happen. Soon, though, soon.
My cover goddess Angela had a nasty computer crash! She's fairly certain she saved nearly everything from the cover shoot, though. However, she's as picky about her covers as I am my books, so she's only slowly revealing her preliminary work to us through her Facebook page. She told me yesterday she had an epiphany about what she wanted, so that's the only reason we have a glimpse at this point.
I'm also toying with the Halloween story. I know my general premise, and I'm about ready to start writing. That's always the fun part! So in amidst all the editing work and the final Beckham Spirit Fest 2015 plans, I'll be enjoying part of every day, also.
Halloween's almost here, too! The veil is going to start thinning soon. Stay safe!
Boo!
T. M.