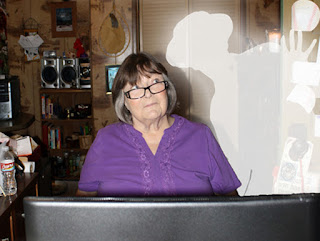 Alan Reading Over My Shoulder

First, a follow up from last week's blog about Aunt Belle's Harold ghost. A reader asked me how Aunt Belle's daughter, Sammi, reacted when she found out about the new ghost in her house. Actually, Aunt Belle said, she took it well and thoughtfully.
"I've seen this man," Sammi said. "I only saw him as a shadow, though, and from the shape, I thought it was Joey's father." Joey is Sammi's husband, and his father passed away a year or so ago. "He's tall and slender, right?"
"Yes," Aunt Belle told her. "But it's not Joey's dad. It's this Harold guy."
"I've seen him a lot," Sammi replied. "All over our mobile home. Huh."
Aunt Belle also said that Sammi is fine with us coming over to her home to see if we can contact Arthur Morgan, in order not to disturb Aunt Belle's husband. So we're hoping to get that set up one day soon.
Now, as to the subject ghost in today's blog. Readers who have been following me for the past few years will recognize Alan, the ghost who "lives" with my cover goddess and friend, Angela Rogers. Alan is a very strong ghost, and he makes no bones about his feelings sometimes. He also needs a dose of discipline now and then, but this isn't about one of those times.
Recently, I was reading one of the chapters for my current work in progress, Silent Prey. It happened to be a chapter where the characters were discussing an earlier incident involving "Allen." Although we were at my house, I immediately felt Angela's Alan crawling all over me with his energy. She and I looked at each other and laughed, then explained to our friend Amanda what was going on.
"He's all excited, jumping up and down," Angela said. "He's saying, 'I'm in her book! I'm in her book!'" It didn't seem to matter that the names were spelled differently. It was an Alan as far as Angela's Alan was concerned.
Later, Angela took the earlier chapters of Silent Prey with her on vacation, to read and give me some feedback. She was still reading when she got home, and when we talked, she was again laughing about Alan.
"I got to the point where the monster attacks, and Alan was reading over my shoulder. All of a sudden, he started yelling in a really anguished tone, 'I got disemboweled! I got disemboweled!' He's still upset about that."
I laughed with her. Sorry, Alan, you'll just have to get over it. I'm not changing my story because of you. But I'm glad you got such a nice visual from what you read. J
Anyway, there you have a teaser of what's going to happen in the book.
~~~~
Silent Prey will be heading out for editing feedback this coming week! As soon as Angela is ready, we'll show you the cover. It will probably be sometime in mid-September before the book is up for sale.
I've also started my Halloween story, so hopefully, I'll have it ready in October. Then? Well, then another Ghost Hunting Diary and Dead Man Mystery.
Halloween's on its way! And so is our Beckham Spirit Fest for 2015 on October 3 in Mineola, TX. Check out who to contact for tickets at: http://beckhamspiritfest.blogspot.com! And our Facebook events page at: https://www.facebook.com/groups/551949198279029.
See y'all next week, if the creek don't rise.
Boo!
T. M.
Posted by TM at 6:50 PM