A few years back, no one would dare advertise a house for sale and say it was haunted. Now, it seems like the newest fad. I, for one, care too much about my ghosts to leave them in the hands of someone who might mistreat them, should I ever sell my house. Which is definitely not something on the near horizon. I would take each and every one of my ghosts with me to my new home.
Anyway, for some reason this got me to thinking, wondering whether houses are haunted before people move in or whether certain people attract ghosts. Of course, without investigating a house before someone moves in, I have no way of knowing. Even in my own home, I have to admit I'm not sure. When I first moved in here, I wasn't involved in investigating the paranormal. Looking back, I do recall a few incidents before I got serious about my new interest in the other dimension, so perhaps it was already haunted. Or perhaps the ghosts were attracted here because they sensed an accepting atmosphere before I even knew it myself.
Aunt Belle is one of those people who refuses to actually own a house. It's the way she is, and that's that. After I moved away from Ohio, we stayed in touch mostly through letters (yes, that was when the mail was a huge part of our lives and we got excited when the postman stopped at our mailbox). Over the years, I recall her writing to me concerning several stories about ghosts in houses where she lived. Since she came to Texas, she's only lived in two different houses, each one of which had ghosts.
The first house was haunted by a little girl and an African-American man. I experienced those ghosts, also, when I visited her. The little girl was very shy, so I didn't sense her too often. The man was a lot more visible at times, and sometimes he wasn't very nice.
A few months ago, Aunt Belle made her second move in Texas. This time, she rented a mobile home on a nice, large lot in the country. Here's a picture of Aunt Belle and her two daughters, Sammi and Shari at Aunt Belle's surprise birthday party last summer. That's the home in the background. 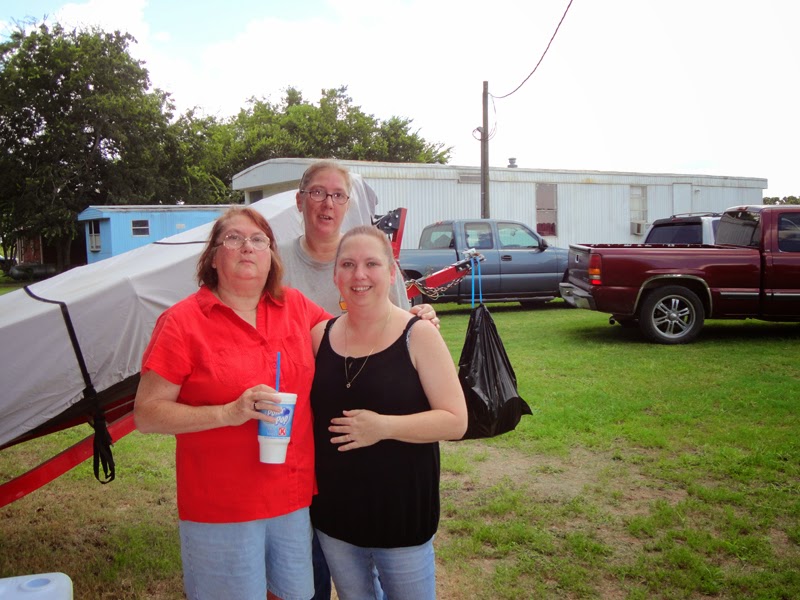 It wasn't a week after she moved before she called me and said, "I've got a ghost here."
"Doesn't surprise me," I said. "Who is it?"
"I don't know his name, but he's a really handsome Native American guy."
"That's nice," I said. "If we have to have ghosts around, then handsome guys are cool. Have you talked to him?"
"No. He just passes by. I see him as he's walking through the trailer, and he goes on out the wall."
Since our land was inhabited long before we built on it, it's no surprise to either of us that we sometimes see ghosts that are not connected to whatever building now occupies certain land. Her new home is near a river, and water was important to the Native Americans.
I called her about a week ago, and she said, "I've got another ghost."
"Tell me about it," I said.
"It's a man, and he's a miner. He even wears one of those hats with a light on it, like miners who worked underground used."
"Wow, he must be really visible for you to see him that well."
"He stands over by the dresser in my bedroom," she said. And since her bedroom isn't that large, yes, she would have a clear view of him if he visualized in full-body form. "Today, he even told me his name. I got up and walked over to get something out of the dresser, right beside where he was standing. He said, 'I'm Arthur Morgan.'  I said, 'Nice to meet you, Arthur. I'm Belle.'"
"Cool," I said. "But weird that he's a miner."
"I think there was some mining done around here at one time," she answered. "I'm going to get out some of my books and see what I can find."
When I called her today, she said she had indeed looked into the history of the area. Seems the very first coal mine in Texas was near where she lives, in Rockdale, Texas. It was called the Black Diamond Mine and came into existence in 1890. That's confirmation enough for both of us that Arthur used to live in the area. He probably roamed all these years, lonely and confused. When he came by after Aunt Belle moved in, he felt that welcoming atmosphere and decided to introduce himself to her.
We're not sure about the Native American guy. He probably has been haunting his path for a while. He could be a residual, since he hasn't bothered to talk to Aunt Belle. However, we don't know for sure, since we haven't tried to contact him. Arthur, though, is definitely able to communicate.
It's really interesting to both Aunt Belle and me to look into the whys and wherefores of the ghost activity we experience!
~~~~
I'm still working on Dead Man Ohio and enjoying the weird things my Muse is coming up with. Hopefully, you, my readers, will also.
Angela had an "ah-ha!" moment the other day as I was reading one of the chapters to our writing group. When we looked over at her, she said, "I've got my cover for this one!" She's fantastic about making sure the cover fits the book. However, she said now her problem is going to be finding a — Whoops. Can't tell you that yet. Of course, you already know it will have a skeleton on the cover. The surprises will be what she puts with it.
Fun, fun!
Hope spring makes it to your neck of the woods soon. Some of our poor flowers were already blooming when the ice hit. Poor things. But now we are starting to be on the lookout for the bad spring weather we get. In Texas, that means tornadoes. So I'll keep strong white light around not only my home, but also my town. Wish it would protect everyone, everywhere.
Stay safe, and ….
Boo!
T. M.