I know you've heard me say I love it when I get confirmation on something paranormal. That happened again this past week, and I did so enjoy it, especially since it had to do with the wonderful Beckham Hotel.
I can't reveal a lot about who gave this confirmation to me except to say that he's someone closely associated to the Beckham in the past. He found me through Facebook, which is the way a lot of folks track me down. Others contact me through the information I put in my books. I used to think social networking was a pain in the … you know what. However, I've found a whole lot of enjoyment interacting with the people I find there.
Anyway, this man messaged me on Facebook and we began a correspondence. He knows a heck of a lot about the Beckham, and his identity is completely verifiable. The most exciting thing was that he knew some of the people who had actually lived at the Beckham before the last time it was shut down. After he read the Beckham report in Ghost Hunting Diary Volume V, he identified several things for me, as well as a name or two. He also gave me some new information, which it will be fun to check out. I'm collecting all of his information and sending it on to Angela, our SRT historian. I've got a new topic on my to-do list: Write up another Beckham report on some historical facts we verified in our investigation.
Although everything we discussed was fascinating, one thing topped it all. I am never in doubt of Aunt Belle's abilities. She's shown me numerous times over the years that the information she receives is as accurate as it can be, given the difficulty of communicating with ghosts. Do you remember in the Beckham report about her being in the lobby alone, then telling me what she experienced? Here's what I said about that:
~~~~
I noticed Aunt Belle then, sitting in one of the lobby chairs, and walked over to talk to her.
"Are you finding any ghosts?" I asked.
"The gambler was just here," she said.
"Great! What happened?"
She pointed at the glass doors between the lobby and Taste of Italy. "He came out through there while I was standing sort of halfway between the stairwell and those doors. He just strolled on over to me and said, 'My name is Doyle. D-O-Y-L-E.' Then he walked away down the hallway, toward where that man teaches his music classes. I called after him and said, 'My name is Belle,' and he nodded. So he was as aware of me as I was of him."
"You think he's the gambler everyone says is here?"
"Yeah. He was dressed in a dark suit that looked like it was from the 20's or 30's. He had on a vest with a watch chain across it, like they wore back then. He was tall, with dark hair that was probably black."
"Did you notice anything else?"
"I got the distinct impression he was a gambler. At the least, he was someone who came here a lot. His attitude was that everyone should know who he is."
~~~~
One piece of information the man who contacted me told me was that there was a man who lived there at the hotel who was considered quite the womanizer. And this man's name was Doyle Todd.
As I mentioned, it's hard to communicate with ghosts. Therefore, if what we receive is proved 50% accurate, we're very satisfied. The time period of the clothing on the ghost Aunt Belle saw is different, but the man's attitude sure does fit the man who lived at the Beckham. The name is very definitely the same, since the ghost even spelled it for Aunt Belle.
The Beckham is becoming a big interest in our lives. I'm so glad the proud lady is being revived. Whenever I get more information on the hotel, it makes me want to go back again. And again, and again. Maybe I can plan a trip out there with in the next week or two, since I need to gather some more information about the fundraiser and run some ideas by Connie….
~~~~
As to the writing life, I'm nearing the halfway point on Dead Man Ohio. Of course, writing it is only half of it. The editing, critiquing and rewriting will take some time after I finish the first draft. But it's still turning into one of the most fun books I've written.
In the meantime, Living With Dead Folks, Volume Two, is selling nicely. It seems to be up everywhere I've distributed it. You can find some of the buy links on my web site, of course (http://www.iseeghosts.com) or just do a search for me on any of the sites that sell my books. 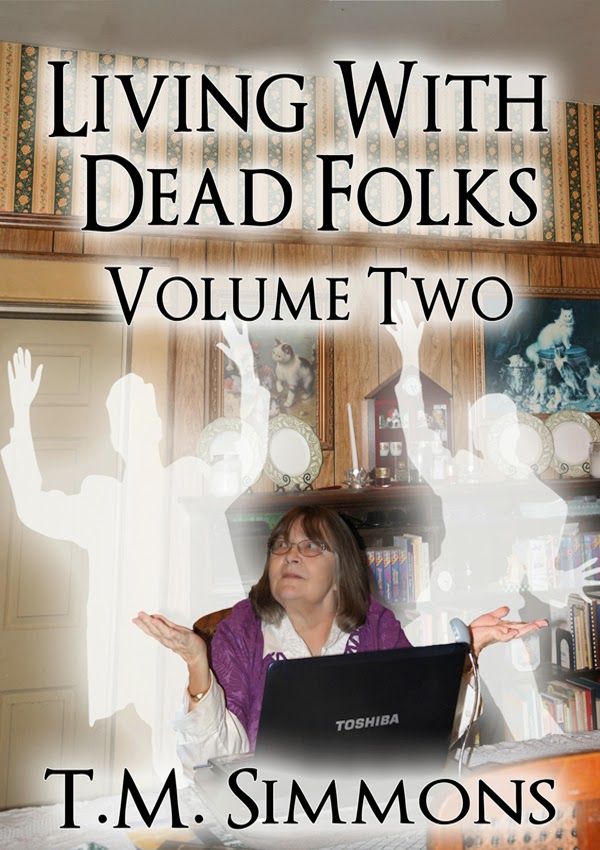 According to the calendar, Spring is here. I hope it's showing up in your neck of the woods.
Boo!
T. M.