So y'all have heard the saying, "When it rains, it pours," right? Or this one: "It's feast or famine." I'm not sure how August slipped up on me, but it's here. It's also already booked as the busiest month of 2014 for both me and SRT. We have three investigations scheduled, and that's in amongst all the writing and other responsibilities. Whew! I'll get to those in a moment.
I know for a fact that I've been too busy this week to pay attention to the paranormal happenings here in my house. Two of them do stand out.
On Tuesday night, we had a small going-away party for some friends of ours who are moving down toward San Antonio. James Faulk is the founder of Lonestar Paranormal, and we've done some investigations together. He and his lovely wife, Ashley, have a gorgeous little daughter, Claira. The first time James brought Claira to my house, she was only a few months old. However, she was old enough to see the little lady in my kitchen. We noticed her waving and smiling at the little lady several times. So it should be no surprise to me that right before they showed up, I happened to see this little lady in a fairly visible, misty apparition in the kitchen.
Waving as I walked through the dining room, I said, "Claira will be here in a little bit."
The lady smiled back at me, so I knew that was why she'd appeared just then. 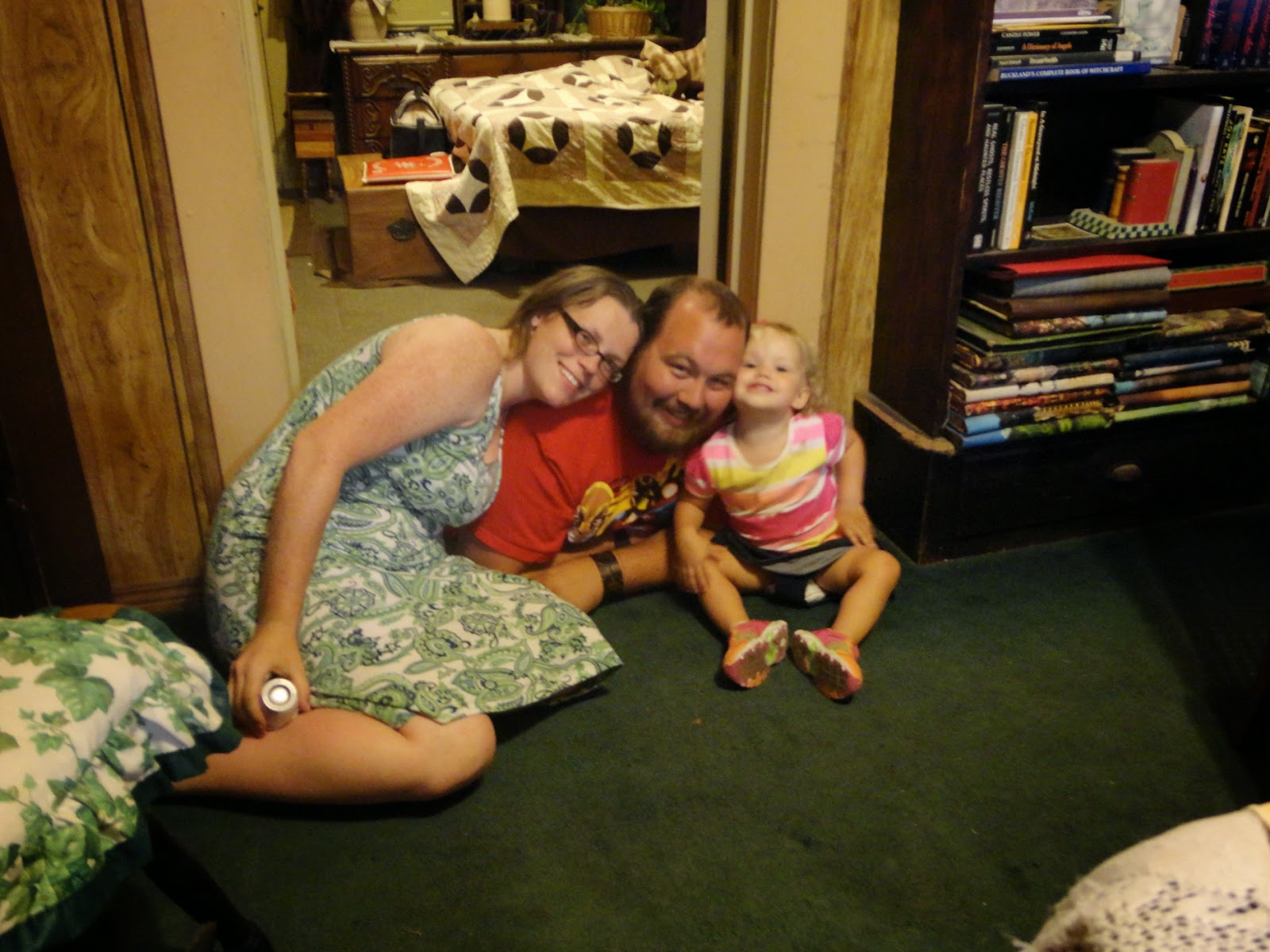 Ashley, James & Claira
We'll miss our friends, but they'll come back to visit.
Another night, I couldn't sleep, so I wandered through the house and back to my office. Once again, I found the dining room, living room, and my office full of a heavy mist. Someone who didn't know their house was haunted might have immediately gathered man and beast and abandoned house as she called 9-1-1. To me, it was just another one of those late nights when the mist inundates my house. I never see any ghosts or other entities moving through this mist. It's more like a light fog filling all the rooms. Interesting, but I have no idea why it happens. I did have a thought as I wrote this just now. I intend to start paying attention to the phase of the moon when this happens. Well, I'll try to do that. Sometimes I have writing on my mind rather than paranormal research.
~~~~
If you're keeping track of Dead Man Ohio, it's out to a couple friends right now to have them read it and see if they find any problems plot-wise or any of those darned typos. I've got a couple things I also want to look at in the story, but it won't take long after any necessary corrections are made to get the book up for sale. Angela has re-done all the covers for the Dead Man Mysteries, annotating them as to which book is which in the series. I'm replacing those covers, also, while we ponder the final edits.
So, as to our schedule for August. We have our first investigation near St. Francisville, Louisiana, somewhat close to The Myrtles in mid-August. Since my team hasn't seen this fantastic haunted plantation like I have several times, we will definitely go by there.
This is a night shot of The Myrtles I took years ago: 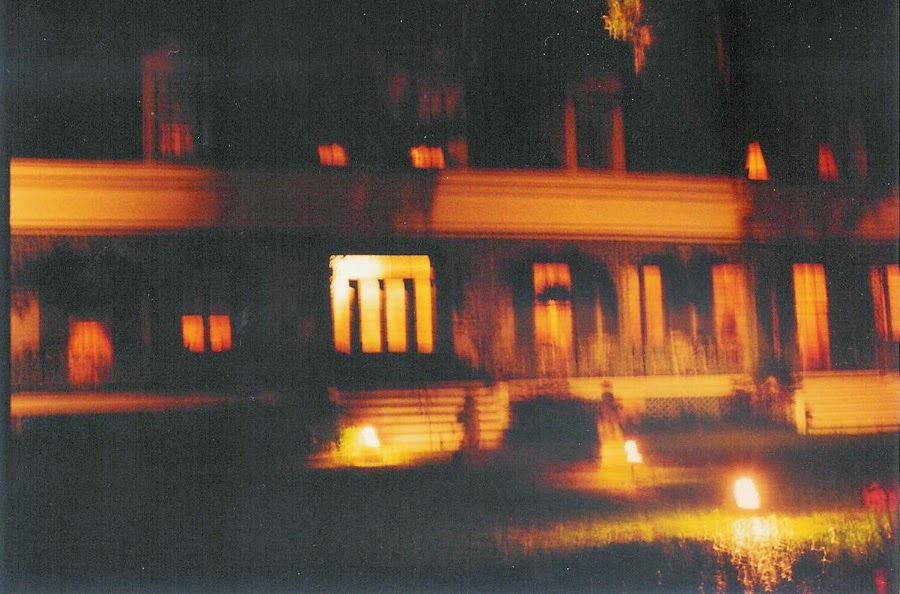 Myrtles at Night
The investigation, however, is at an old Cajun store owned by a good friend, whom I actually first met at The Myrtles. Without her agreement, I won't divulge the location. Hopefully, I can tell you later. A sensitive, also, she has identified five ghosts in the store. Aunt Belle and I previously visited this woman's home, also, and there is activity in it, as well as outside, where some of the Civil War battles took place. I imagine we will get lots of evidence to examine.
Next we have our August 23 stay at the Beckham Hotel in Mineola. Fear Paranormal, Selena Roane's team, is heading up the only paranormal investigation done at the hotel so far besides the ones SRT has done. My crew will only be there to help out, as Selena will be directing this one. We do have four slots left for this. Also, we'll have a new friend with SRT, Karla Lang. We'll be doing some things from now on with Karla, and I'm really looking forward to spending more time with her.
Here Karla and I are, me with my mouth full of birthday cake. 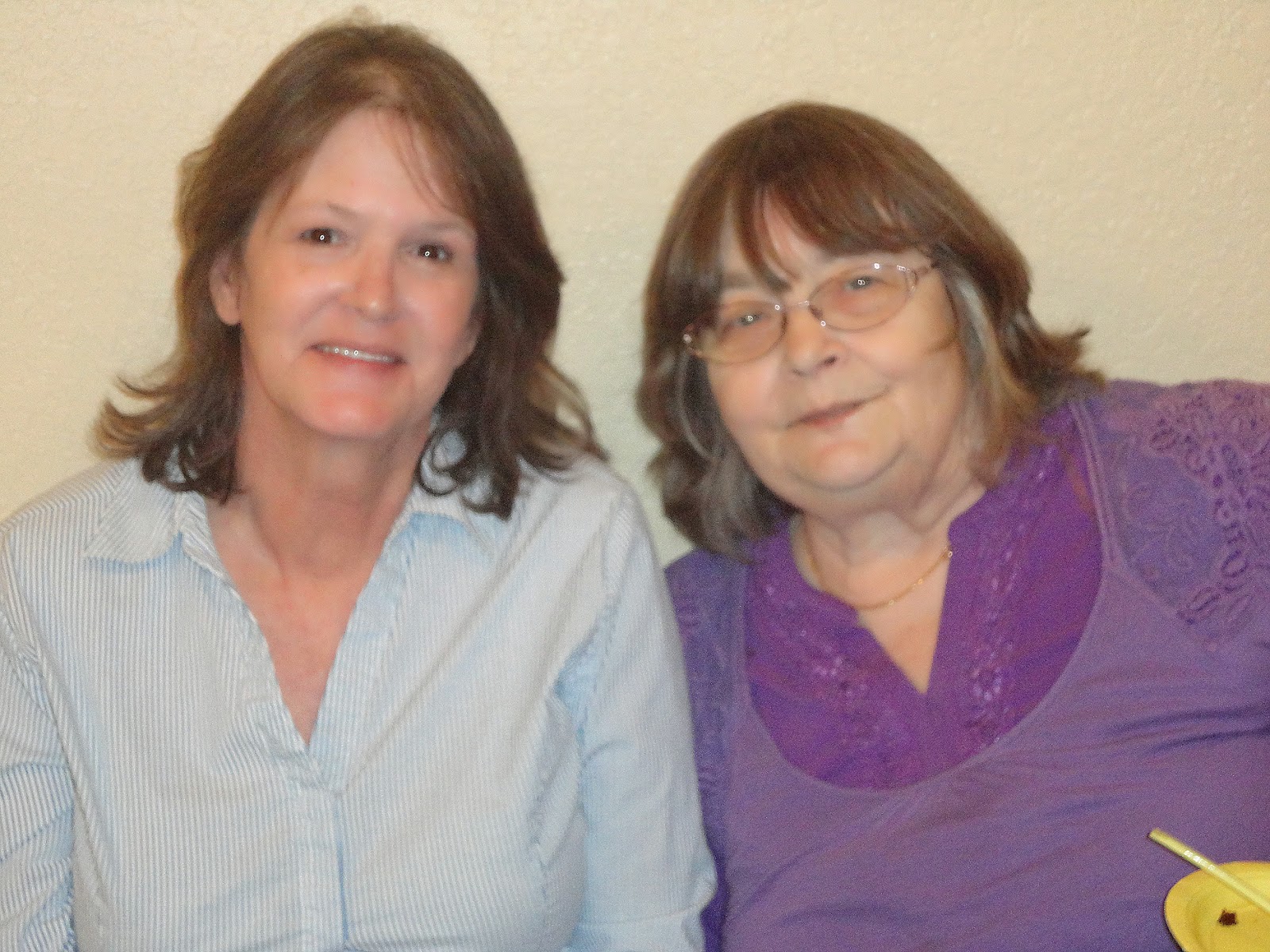 Karla, Me
At the end of August, SRT is investigating a lovely old 1876 home in East Texas. Again, I'll wait to see if the homeowner wants to reveal the location before I do that. Karla will also join us on this investigation, along with our wonderful Aunt Belle. How cool is that?
Double Whew! All of us are really excited to be so busy doing what we love. I'll be reporting back in as to what we find, plus if the investigations warrant it, I'll be giving y'all more extensive reports in an upcoming Ghost Hunting Diary.
Stay safe, and ….
Boo!
T. M.