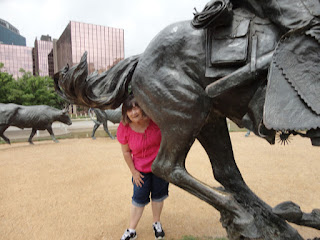 Me Relaxing
Whew! I've had lots of fun company the past few weeks. My friend Dianna Miller and her buddy Earl from St. Francisville, Louisiana, came to stay for a week or so. We had a wonderful crawfish boil the Saturday before they left, with lots of fun and friends. Then Aunt Belle came for three days, and we enjoyed hitting some estate sales and garage sales. A few days after that, Dianna and Earl stopped back by for a couple days, on their way home. 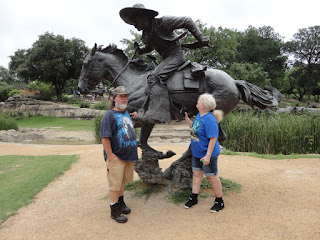 Earl and Dianna
I really enjoy having good friends come to visit, but yes, it puts me behind. I had this blog typed up and ready to upload a week or so ago. Of course, life interfered.
There were a couple paranormal incidents during these visits. One involved the small stereo sitting on the entertainment stand in the Molly Belle Suite, where visitors stay. I've never figured out how to set the time on this thing. Well, to be more honest, never took time to puzzle it out. So mostly it sets there blinking 12:00. However, both Dianna and Earl reported that the 12:00 blink would morph into the stereo coming on full-face, although there was no sound to it. This would happen whenever they talked about that stereo and the strange things it did. Then it would go back to blinking 12:00.
When Aunt Belle came, I asked her if she had noticed the stereo doing this.
"No," she said. "I just don't pay much attention to it. I'm enjoying the quiet and peace too much."
So I finally decided to unplug the stereo. If it turns on now, we will know for sure it is something paranormal! And an update is: It hasn't turned on since it has been  unplugged.
The other incident happened with my couch in the living room. Since Earl snores pretty loudly, Dianna would come out and sleep on the couch instead of in the Molly Belle bed. She said more than once, the couch "moved" under her. I experienced that myself the last night Aunt Belle was here. I didn't mention it to her, but while we were watching TV, I felt three distinct knocks underneath the couch. There wasn't any noise, just the feel of something rapping on it. So I guess we also have a haunted couch!
Looking back over the past three weeks, you would think there would be more incidents to report. Guess what? There aren't! Oh, I've seen a few of my ghosts now and then, as usual. However, they were fairly quiet until….
The night before Dianna and Earl were leaving to return to Louisiana. We were both chatting in my living room.
"I've seen the man in that bedroom we're staying in," Dianna told me. She didn't appear to have enjoyed the experience, either.
"What happened?" I asked. "And was it Teddy? You know, the ghost who wears that hat?"
"I don't know who it was," she said. "I could tell someone was standing there, watching me. However, he was only a black shadow shape."
About then, I glanced over at the Molly Belle Suite doorway. I'll be damned if a black shadow didn't walk past the dining room table and straight into that bedroom! I shook my head, but Dianna could tell something had happened, and she kept staring at me.
"Maybe I shouldn't say this," I told her. "But I just saw that man go into your bedroom."
"Did you see who it was?" she asked.
I shook my head. "Actually, it was only a black shadow. I could tell it was a man, but that's about all."
She just shook her head. In the flurry of her leaving the next morning, I forgot to ask her if she had seen him again. She had kicked Earl out onto the couch and was sleeping in the bed herself on that return trip. I haven't seen that shadow man since then myself, either. Maybe one of these days he will show himself or communicate. 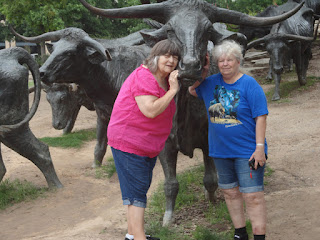 Me and Dianna
~~~~
I have gotten a lot of writing done on Silent Prey. It's moving right along, and I continue to be really pleased with the story. I'm hoping to have some really good writing time during the next couple weeks. Things are ready to go ahead on the Spirit Fest, after our last meeting with Connie, the owner of the Beckham, so I'll be dedicating a bit of time to that. I've also been asked to be on another internet radio show, scheduled for June 16. More on my Facebook page about that soon. However, my fingers are itching to write more on this story!
Sorry there aren't more paranormal tales for this blog. That's how it goes sometimes, though. Lots of activity for a while, then it tapers off to only one or two incidents a day around here. And since I won't embellish, that's all my loyal blog readers will get when the ghosts stay quiet. Perhaps there will be more next time.
In the meantime, stay safe, and….
Boo!
T. M.