I know I haven't posted a blog for a while, and I really apologize. Sometimes life gets in the way. To make up for it, I'm going to try really hard to post weekly from now on until the end of the year. I have quite a few notes about some recent paranormal incidents, which I believe you'll like. The most fascinating one for Aunt Belle and me was the following.
On August 3, 2015, I got an inquiry from a really nice buy named Ronnie Morgan, who has given me permission to blog about his story. Ronnie had read my post from March 15, 2014, titled "Aunt Belle's Ghosts." After we chatted for a while, I was so excited that I went to the computer to memorialize this. Hope you enjoy it as much as I did and am still doing. 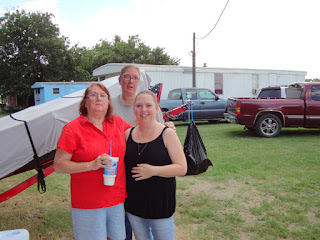 Aunt Belle and Daughters,
Sammi and Shari
Home in Background


Aunt Belle moved to a new home and, of course, she started to become aware of some of the ghosts who were around her. This happens to both of us, and really, it's not as if we spend our days talking to ghosts. There are times when they appear and communicate, times when we go about our day-to-day activities without any paranormal incidents at all. After a few weeks in her new residence, Aunt Belle reported on several ghosts she'd become aware of. One of those that she saw clearly was an African-American man. She said he appeared in the corner of her bedroom and was as real as if he were still alive. She thought he was a miner, because he wore one of those hats with a light on it, like underground miners used. He even introduced himself to her: Arthur Morgan.
She responded with, "Hi, Arthur. I'm Belle."
We hadn't really talked about Arthur much more over the following months, except for her saying now and then that he was still around. Then out of the blue, I received the email from Ronnie. He told me that he believed Arthur was his great-great-great grandfather! He gave me some more information, which included the fact that his g-g-g-grandfather had lived in Rockdale, TX, in Milam County. I wrote him back and said that Aunt Belle now lived in Gause, which is very close to Rockdale. I also said I would put him in contact with another friend of mine, Karla Lang, who is a genealogist. In addition, I decided to see if Aunt Belle minded if he called her, which I was sure she would agree to. She and I love to follow up on situations such as this one.
I called Aunt Belle, and she gave me permission to give Ronnie her phone number, plus told me some more information she had found. She said Arthur had fascinated her so much, she did some more research after the first time she told me about him. One day she went to Rockdale, TX, and visited the Rockdale Chamber of Commerce. The lady there gave her a book on the area, and in it, she found out about the Black Diamond Mine, which began operation in 1890 in the Rockdale area. Indeed, according to the book, it was the first coal mine in Texas.
She also mentioned that Arthur carried one of those round lunch boxes, like her Daddy and mine had carried to work years ago. Her daughter, Sammi, said that, while she hadn't seen him, she had smelled Arthur now and then, that he smelled like coal dust. Since we all grew up in Ohio, where our houses were heated by coal, we are all very aware of how coal dust smells. It was stored in our basements and shoveled into our coal-burning furnaces in the winter.
As Ronnie, Aunt Belle and I, and even Aunt Belle and Arthur, all chatted and exchanged information, there was no doubt in any of our minds that yes, Arthur was Ronnie's ancestor. Karla reported in, too, saying that she had found Arthur listed on a census report and sent Ronnie the information.

Ronnie has asked Aunt Belle to try to talk to Arthur and see if she can get any more information about both Arthur and Ronnie's g-g-g-grandmother. His initial email to me said he and his family want to find out more about their ancestors, so they could properly honor them. I felt really blessed, as did Aunt Belle, to have someone request this of us, and to possibly be able to help them. As it stands now, we're hoping I can go down to visit Aunt Belle and have Ronnie come over at the same time. We'll do what we consider a semi-séance, where we sit down and talk some more with Arthur.
Aunt Belle doesn't think we need to do a crossover, since she has a strong feeling that Arthur has gone into the light and is coming back as a spirit. So even though I refer to Arthur as a ghost in my blog, it's for clarification for my readers. She doesn't feel that he's one of those lonely lost souls wandering around looking again for the doorway into the light. We are always glad when we have an encounter such as this. We enjoy the chats we have with souls who come back to visit us, plus on the other side of the light is where we believe all ghosts should go.
In addition, this is one of those very special situations where we get confirmation of a person whom she or I have communicated with having definitely once lived. We both continue to be in awe of these encounters. It reaffirms the fact of life after death.
~~~~
As to my writing life, I'm hoping Silent Prey will almost be a book by the time you read this. Most of it is already with Angela Rogers for an initial read. She doesn't have the last few chapters, but they are nearly ready for her. She's also working on a dynamite cover! 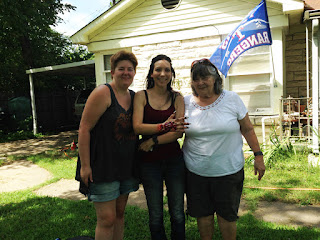 
The book still needs to be edited further, both by me and with another read-through from a couple other friends. I'm picky about my books, and I never want to put them up for sale until I'm totally happy they are the best they can be for my readers. Keeping my fingers crossed that I'll have another book for you by the first part of September.
What's next? Well, another set of ghost hunting diaries, for one thing. Ghost Hunting Diaries, Volume VI, is pretty much mapped out. I have the index of stories I'll be putting in it, and some of them are partially written. Lots of work yet, but I should have something by the end of the year.
There's also my 2015 Halloween story to write. I know what it will be about, and I'm hoping to get it done in time for an October release date.
October is always busy for paranormal investigators. October 3 is our Supernatural Researchers of Texas crew's 2nd Annual Beckham Spirit Fest. Wow, it's really rolling up on us. We have such a wonderful lineup of speakers! Tickets are for sale now, both for the paracon and the ghost hunts afterwards. You can find out more information at http://beckhamspiritfest.blogspot.com. 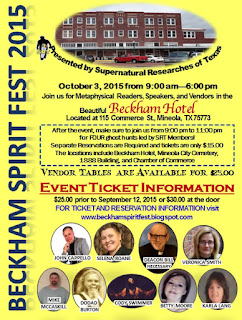 Busy, busy! And for real I am totally enjoying everything: the writing, planning for the Spirit Fest, visiting with my readers, and getting my blog back on track. Hang in there with me.
Boo!
T. M.