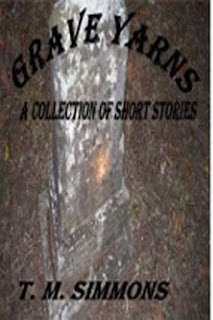 Grave Yarns is still free at Smashwords, until tomorrow midnight! Use Coupon Code VA85W. So, so sorry! For some reason, Smashwords dropped the coupon instead of keeping it free until tomorrow! Ugh, and sorry, also, Danielle, and thanks for letting me know. I reinstated the coupon, but it wouldn't let me renew the same code. Here is the new coupon code, which is (supposed to be) good until 10/28 at midnight: SR48X.
Here I am talking about my memory, and I did screw up. Grave Yarns is definitely free at Smashwords with that coupon code. But Dragon's Dishonor is also free and it's the one with the first coupon code: VA85W. Sorry for the mixup.
Have a great Halloween and Samhain and All Hallows Eve. Enjoy any communication you get from beyond, and I'll see you next week. We're headed out Tuesday night to prowl a cemetery, so hope we get to chat with some other world folks.
Boo!
T. M.
Posted by TM at 11:43 AM