The Past Remains With Us 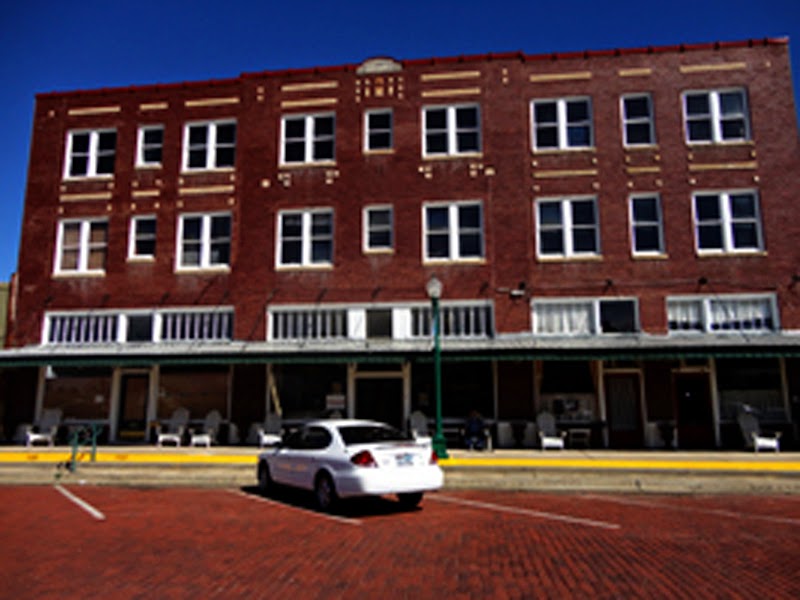 
I've always been fascinated with the past, and I absolutely love historical buildings. My reading choice for years was historical romance, and that's what I wrote for a long while. Then it took a veer into time travel romance. Perhaps I was feeding my desire to travel back to some of those fascinating eras. Who knows? I also wrote paranormal romance before I moved into paranormal mysteries, along with my true ghost stories.
Lately, I've been blessed to have access to one of the most wondrous buildings in the U.S., with a mesmerizing past: the Beckham Hotel in Mineola, Texas. There are also a lot of others who are enthralled with this majestic lady. Some of them are people who were associated with the hotel during their own lives and keep visiting it today. In addition, I've met several new friends who care about the Beckham. The latest one is a very cool man who contacted me through Facebook.
Chris Rhodes' grandparents managed the Beckham Hotel from the early 1950's into the late 1980's. On Monday, Timmy, my equipment tech, and I met Chris at the hotel. We filmed Chris as he walked through the Beckham and related many of his memories, which we will now have for posterity. It was a fascinating journey back through the history of the Beckham and the growing up years of a mischievous little boy. Well, one of the ghosts who claimed to know Chris told me he was "a cute little boy," too. So we can add cute and mischievous. I can safely use mischievous because Chris himself indicated that as he talked about himself. 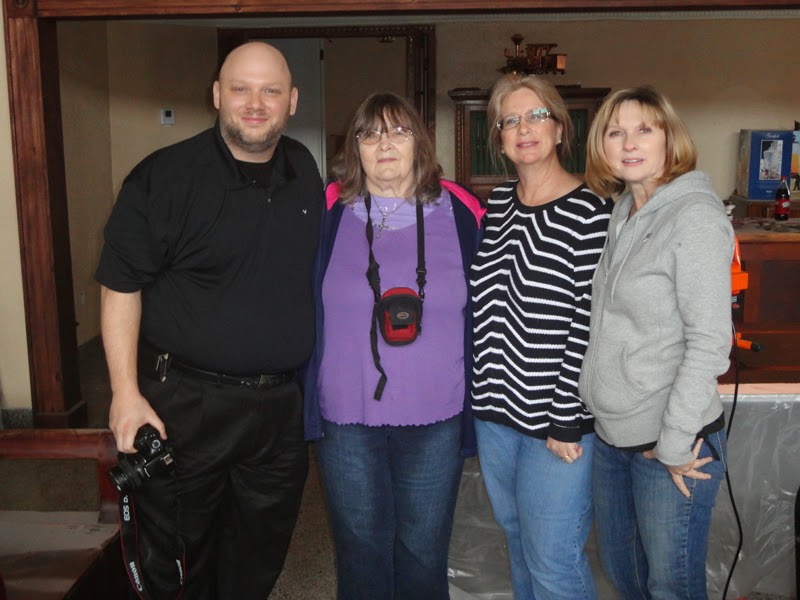 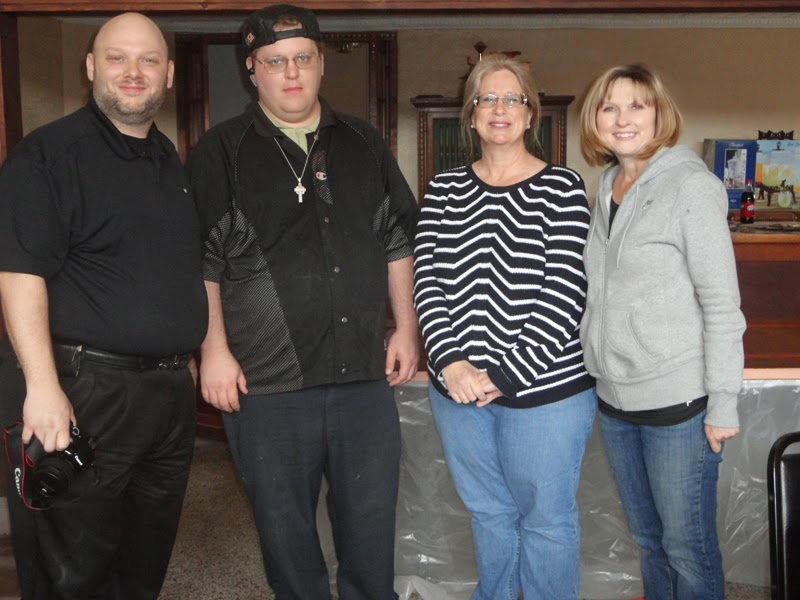 
Connie Meissner, who owns the hotel and is spearheading the renovations, and Darlena, the owner of the Taste Buds Candy and Coffee Shop, accompanied us. They were as glad to have Chris open up as I was. Darlena is also Connie's manager, and both are suitably proud of the progress they've made on the hotel and very grateful for Chris sharing his memories. There will be what Darlena calls "hot spots" around the hotel, which relate the history of it, and what Chris shared will contribute a lot to those and easier research for Darlena. One prominent hot spot will be devoted to Chris's grandparents, Andy and Flossie Lillie.
During the time the Lillies managed the hotel, it was a boarding house. And yes, many of those past residents are still there. Dan, who gave Chris and his friends the Avon aftershave bottles he received as gifts, died in a horrible accident in the Beckham lobby. Dan wanders the entire hotel, because he made himself known to me when we were on the third floor.
I sensed several other entities as we roamed, and the little girl Suzie is still there. Connie related an experience she had had with Suzie when she was alone in the hotel just after they finished hanging the last chandelier in the beautiful ballroom. Suzie giggled in delight at the sparkling crystals and sent Connie looking for her not once, but twice, that evening. You can see in this photo of the Ballroom why it would enthrall a little girl: 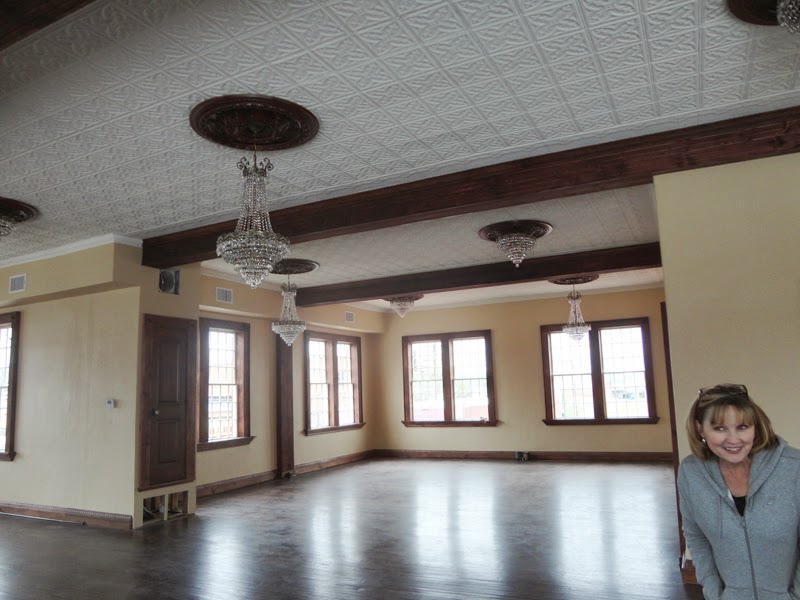 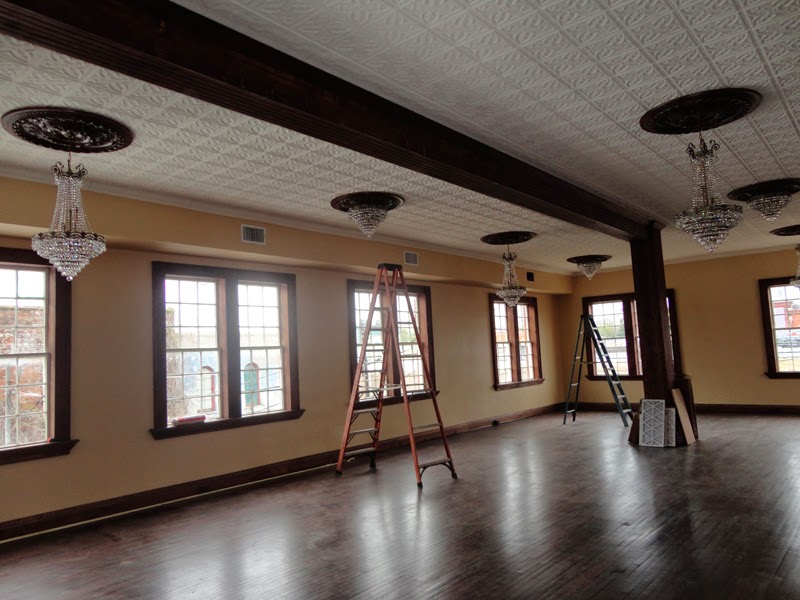 Chris also shared his experiences with Suzie, and caught her on an EVP that day back by the vault, which is in a corner of the lobby beneath the stairwell. 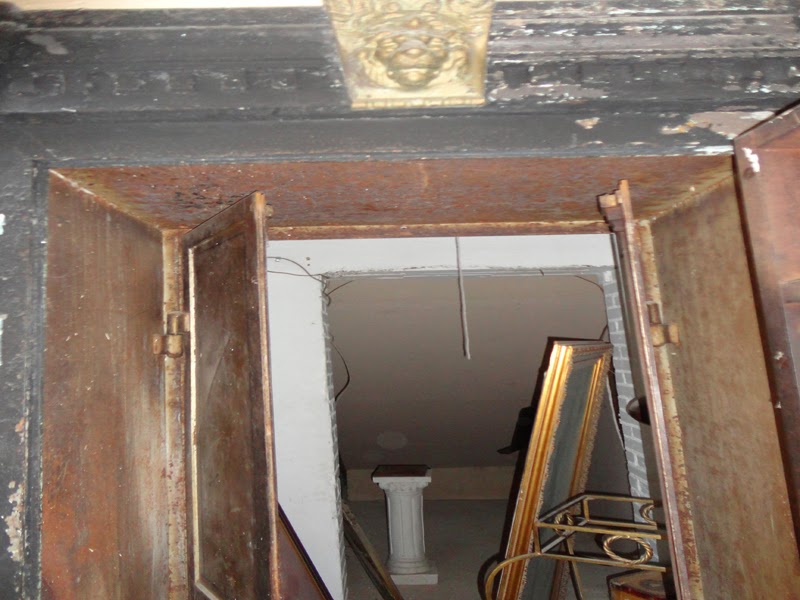 
I'd heard one unhappy story in an email from Chris as we talked before we were able to arrange a meeting, and I was interested in pursuing it. When I first visited the Beckham, there was a phone booth in the lobby. As a boy, Chris said he loved to play Superman in that booth. However, there were two phone booths there initially.
One day a man whose name Chris cannot recall wandered into the lobby and went in one of the booths. Next thing anyone knew, the poor man shot himself with a shotgun. The pellets also made a hole in the adjacent booth. There is evidence left behind, too.
Chris pointed at the marble floor and asked Connie: "Have you tried to clean these stains?"
"Yes," she said. "We've used everything we can think of on it, and it just won't come up."
"My grandfather tried to clean it, too," Chris said. "The reason it won't come up is because it's blood. It's seeped into the marble and nothing will get it up." Then he related the story of the poor man. 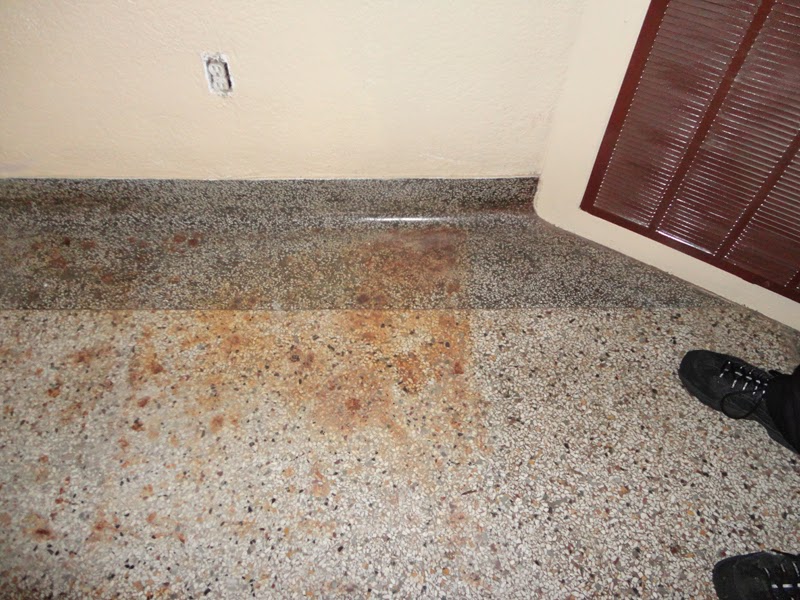 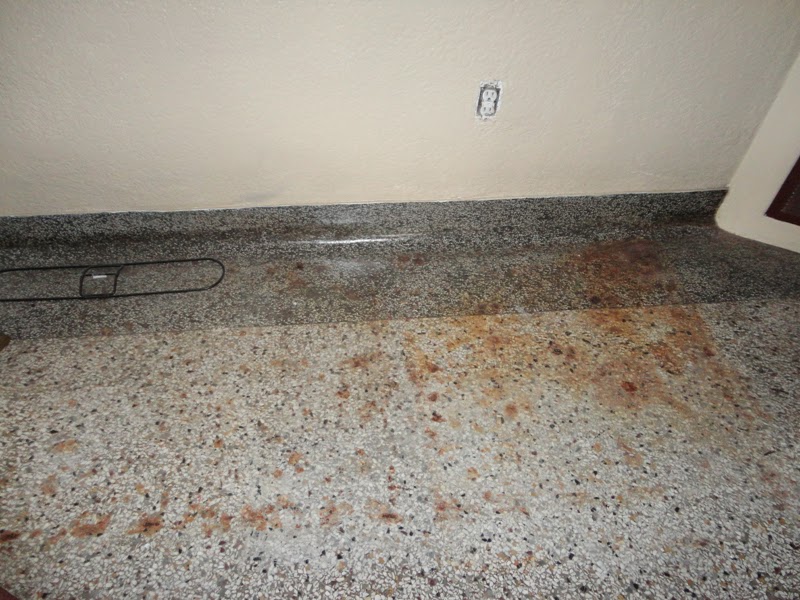 Bloodstains with Outline of Adjacent Phone Booth on Left

As of now, we don't know what drove the poor man to suicide, but Darlena will do some more research. It would be nice for him to be remembered for his sad life. The phone booth where he died is gone, and the other booth is now in storage, complete with the hole in it.
I felt things in the very same places where I usually find activity in the Beckham. Again, it was the same overall feeling: the ghosts there are delighted with the restoration. Despite a couple scares that happened during the overnight investigation last year, I haven't ever sensed anything negative at the Beckham. There is at least one grumpy ghost, but most of them are quiet and calm entities.


After filming, Timmy, Chris and I went down to Taste Buds for another delicious lunch. There, I got to "talk" to Evangeline, the ghost who makes herself known in the bathroom. She's the one who told me, "That Chris was a cute little boy." The other two ghosts were there, also, Pauline, the little girl, and Eleanor, the elderly lady who is Pauline's protector. Yes, they'll be moving down to the Beckham when the restaurant goes. I've told Darlena that if she has any doubts, I'll be glad to come out and escort her ghosts to their new "home" in the Beckham.
Afterwards, Timmy wandered off to prowl some of the antique shops while I accompanied Chris as he walked around the outside of the hotel and talked about some of his other memories. It was almost like being there with him, and I could have listened to him for several more hours. However, we all have responsibilities we have to return to.
Way too much happened on Monday for one blog, including all the information Chris passed on. Be assured, the Beckham is going to welcome everyone when it opens in September. Chris will be back again and again, also, and the hotel and her past residents will always welcome him.
~~~~
It's been a slow writing week, but never a no-writing-week. I've finished two more chapters of Dead Man Ohio. I also have some notes for another one of the articles at the end of Ghost Hunting Diary Volume VI. It started out as a blog, but evolved into something I wanted to elaborate on more. I think it will be really interesting to my readers, since it concerns how a haunting can effect a home and the people in it if one is not careful.
We're finalizing plans for our upcoming Beckham events. The first will be Aunt Belle's Birthday Bash on June 21 at the "new" Taste Buds after it moves into the hotel. I hope our nearby friends will all join us there. I'll soon put an "event" sign-up on Facebook or you can contact me in email. I'll be going back to Mineola in the next week or so to see how many people we'll be able to accommodate.
In the meantime, stay safe and enjoy life. Stop and smell the flowers this time of  year.
Boo!
T. M.