It's been absolutely gorgeous here in Texas the past few weeks, except for a couple storm cells that went through. Mother Nature was nice enough, though, to mostly send them at night. I've been trying to find things to do outside the office, although I make myself write some each day. Friday of this week, I drove out to Mineola, a nice hour-long drive from home. There, I met with Darlena Brown and Julia Dailey to iron out some final details of Aunt Belle's Birthday Bash to be held on June 21 after the restaurant moves into its new quarters off the Beckham lobby.
No, the hotel won't be open yet. That's a ways down the road. We will also be having our Beckham Spirit Fest on October 18, and the rooms available then will depend upon how construction progresses. However, the Ballroom will be ready for the Fest, so it's a go.
Connie Meissner, the wonderful lady who is restoring this grand old hotel, wasn't able to attend our meeting, but she was there in spirit, I know. And I was remembering a story she told me the last time she and I were able to get together. It was about her experience with one of the hotel's ghosts, the little girl we call Suzie. So that will be your ghost story this week.
A couple weeks ago, my equipment tech, Timmy Smith, and I arrived at the Beckham early one morning. We were there to film Chris Rhodes as he wandered the hotel and recounted his memories of growing up there as a little boy. Chris hadn't arrived yet, so Connie took Timmy and me up to the Ballroom to show us the progress, which included now having all the chandeliers hung.
They were so beautiful, and Connie said, "Someone else thinks they're pretty, too." She went on to tell us her experience.
Mother Nature isn't always courteous; the weather does get stormy sometimes during the day here in Texas. The day Connie told us about, it had been raining steadily. It didn't bother Connie and the workers much, since they were in the Ballroom, at last hanging all the beautiful chandeliers from the ceiling.
"We finally got done late in the afternoon," Connie said, "and I told everyone else to go ahead and leave. That I would finish cleaning up. So they did, and I was up here in the Ballroom alone. As I was working, I heard a little girl giggle. It was very clear and distinct, and I had no doubt at all what I'd heard."
Connie said she assumed one of the workers had left the lobby door ajar and a child had wandered in. The Ballroom is on the second floor, so Connie went down the staircase to the lobby level. But although she searched everywhere, she saw no sign of a child or anyone else in the hotel with her.
"So I returned to the Ballroom," she said. "As I started to clean once more, I heard this little girl giggle again. It was so clear, I just knew it was real, that there was a child in the hotel. So I went searching again. But once again, I didn't find a sign of anyone. I even looked out the front door, into the street. It was raining cats and dogs, and there was absolutely no one around."
Back in the Ballroom, Connie said, "I decided I had to be hearing the little girl ghost that's here. The lights were shining on the chandeliers, making them sparkle on this gloomy day, and I believe she was delighted and laughing about how pretty they looked."
Connie said she didn't hear the little girl again, only those two times. But the look on Connie's face when she told us the story let us know how delighted Connie was about making contact with Suzie. She had heard stories about Suzie from others, including our team, and now she has actually experienced the little girl ghost herself.
I snapped this picture as Connie told us the tale of her Beckham ghost. Look how delighted she appears. 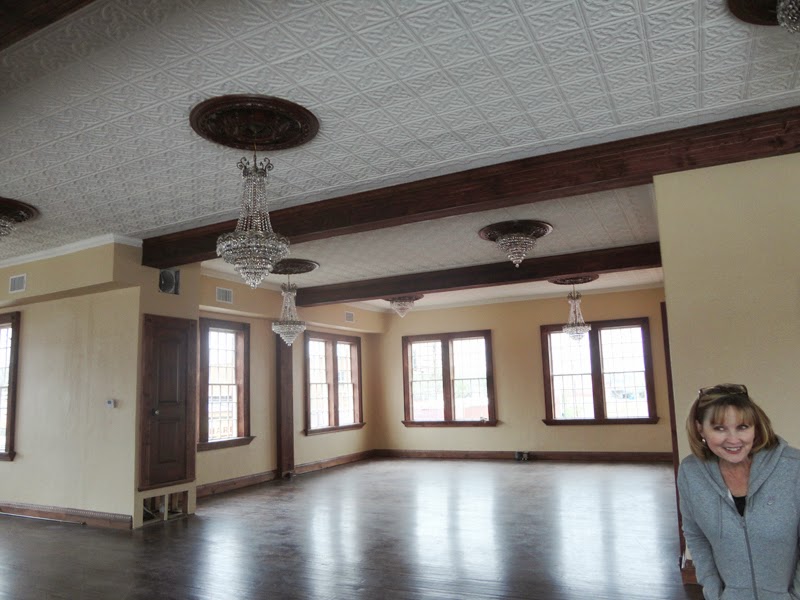 I'm sure the Beckham will reveal itself more and more to Connie as she goes along. It's as though the hotel and its residents appreciate everything Connie is doing to bring it back to life. I know for a fact the ghosts and spirits who are abiding there are delighted with what is happening. They've told me themselves.
~~~~
So, please mark your calendars for Aunt Belle's Birthday Bash on June 21 at the Beckham Hotel in Mineola, Texas. I hope everyone who is in any way close enough will come. The party will start at 1:00 in the afternoon and run until 3:00, or possibly later. We'll have Triskelion,  a Celtic band, there for your enjoyment. Of course, we'll have a birthday cake for our guest of honor, Aunt Belle, the famous paranormal investigator who dragged me into ghost hunting. She's responsible for my having all these great adventures to write about for your enjoyment. Shhhhh. She's also the real life Aunt Twila in the Dead Man Mysteries.
We possibly will be able to let you have a glimpse into the Beckham lobby, but since there will still be on-going construction elsewhere, we hope a glimpse will be enough to stoke your interest. Soon the rooms will be open and the Beckham Spirit Fest will be underway. We'll be making our announcements on June 21 about the plans for the Fest, and you won't want to miss that. If you are so inclined, we should even be able to take your reservation for the Fest at the Bash.
In the meantime, stay safe, and ….
Boo!
T. M.