It's been another of those crazy, no-time weeks. Hub and I didn't even have time to talk about what happened to him until after the fact. I'd been home from FenCon a couple days before he mentioned it.
"Oh, I forgot to tell you what happened while you were gone," he said to me.
"Uh oh," I replied, thinking it was some problem with the house. Since it's quite an old home, I couldn't be blamed for the first thought that crossed my mind.
"No, it's something you're going to like hearing about," he said, evidently catching my hesitation.
"Then do tell me," I said.
"Well, I was taking a nap Saturday afternoon and something woke me up. I heard footsteps coming into the bedroom, and at first I thought it was our dog. Then something fluttered over my face, sort of tickling me before it covered me."
He laughed. "Then I figured it was our son, Kelly, since you know how he likes to play tricks."
"But it wasn't?" I asked.
"Nope. I grabbed it off my face and saw it was one of the tissues from that box you keep here on the dresser beside the bed. I tossed it onto the floor and started to go back to sleep. A few seconds later, it dropped over my face again!"
"Wow," I said.
"Wow, yes. It was the same tissue, because I sat up to tell Kelly to quit that. I looked all around. There was no tissue on the floor, so it had to be the same one. And I sat up immediately after the second time that thing landed on my face. So there was definitely not time enough for Kelly to have hurried out of the bedroom or out of sight. I even got up and looked all through the house. Kelly's truck was gone, so he wasn't even home!"
"One of the ghosts," I said with a laugh.
"Yep."
I think he rather enjoys having our paranormal residents make themselves known to him … sometimes. Other times, he tattles on them and I have to give them a warning about how I can discipline them, if needed.
Just one more tidbit for today. As I was typing my blog, I heard someone walk through the dining room and into the kitchen. I assumed it was hub or son, since I'd made them a pot of coffee. But when I got up from the computer a while later, I found hub still in bed but awake. He informed me he hadn't been up yet or in the kitchen.
Then I checked with son, who was just out of the shower. "No, I haven't been out of my room yet this morning."
Huh. Whoever this is, he's got loud footsteps! Aunt Belle will be here week after next, so we'll see what she can "see."
~~~~
I was hoping to have the Halloween story done by now, but most writers will tell you that family obligations come first. And it's been a week full of that. However, I do think I've settled on a title: Deliver Us From Evil. I do like Death Whispers and Hounds of Destiny, also, so maybe those title will spark a couple more stories.
I'll be PM'ing the folks who helped me decide through Facebook.
Lots going on at the Beckham, also. We've got the Spirit Fest, of course, and things are filling up fast. There are only a few slots left on the Chamber and Cemetery ghost hunts, and a couple vendor tables available.
Angela and I went out to talk to Connie on Friday and finalize (as much as possible) the Spirit Fest plans. Here's a picture of Connie and me in the lobby, showing some of the railroad theme decorations Connie chose for the decorative theme. 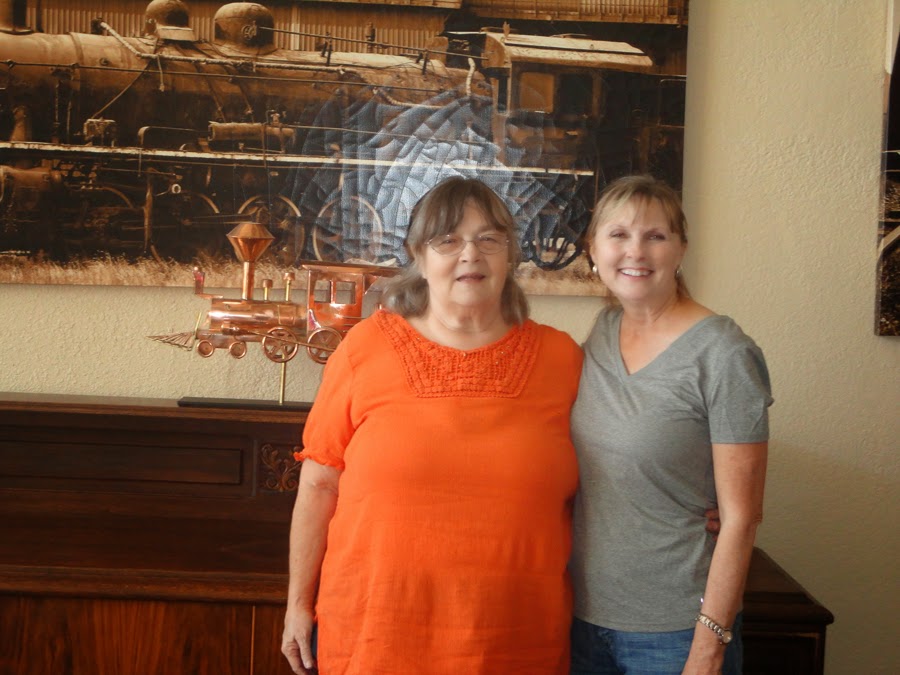 Angela and I will also be going back out on Wednesday to be with Connie during an interview for one of the Tyler television stations. Connie said the reporter wanted "…someone available that could talk about the paranormal aspects of the hotel." Well, Angela and I can both do that!
Also, Audible sent me some codes for free audio books, hoping to garner some reviews for Dead Man Talking. So if you like audio books, give me a PM on Facebook or email at ghostie@swbell.net. The sales have been taking off on this one, so I guess people are definitely interested in it. Shelley Lynn Johnson is working on Dead Man Haunt next. She told me that, "It looks like another fun read." I'm enjoying her enjoyment of my books, for sure!
Here are the Dead Man Talking audio book links again.


It's available at the links below the cover: 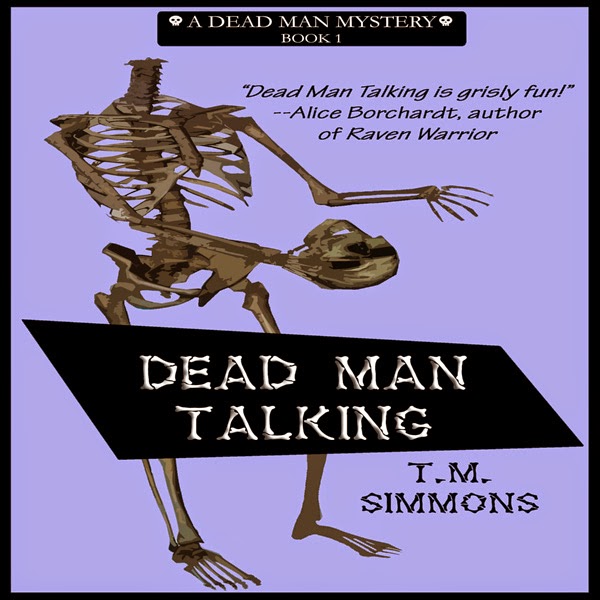 Remember, that Veil is thinning during October. When we were at the Beckham, we personally had several experiences, very strong ones. We also heard about several other paranormal incidents that had happened in the past few days. I've made some notes on them and will report next week. Seeing ghosts is fun for a lot of people, but let's don't forget to ….
Stay safe!
Boo!
T. M.