I've said many times that when Aunt Belle shows up, the ghosts here at my house get pretty active. As an example, here's what happened during her most recent visit, May 2-4.
I'd been seeing flashes of my resident ghosts fairly often. They had also frightened guests several times. The week of Aunt Belle's visit, they grew even more active. I also kept sensing someone new; however, I was busy getting my new books up (Ghost Hunting Diary Volume V) and didn't have time to visit with whoever had wandered in.
After Aunt Belle arrived (finally!), I remembered something I had to do at Wal-Mart.
"Want to ride to Wal-Mart?" I asked her.
"Of course," she said. She's never one to sit around if there's something else to do. She's afraid she might miss out on something.
So we grabbed our purses … or I thought we both did. Just as I opened the front door, she said, "Oh, shoot. I forgot my purse."
She turned around so fast, she walked right through the ghost following her. All I saw was a flash of blue as he disappeared, but I felt sure it was the "new guy."
"You walked right through him!" I said. She just laughed and shook her head, as I did, and went on to get her purse.
Later, we were sitting around watching a DVD. I glanced over toward the front door. There he stood, wearing his blue shirt. But he immediately disappeared when he knew I could see him. I'm still not sure who he is. He's evidently rather shy. Hopefully, he's not a troublemaker. If I start sensing anything like that, he's outta here.
My ghosts are also usually quite helpful when I lose something. I had mislaid my keys after one of our in and out trips for shopping and/or fun. The next time we left, I had to use the backup keys, and when we got back, I looked everywhere for that ring of keys. They sure weren't in the usual place, where I always put them, in the bookshelf in the dining room. Believe me, I searched there at least three times. No keys.
After I'd seen the blue shirt guy, I mentioned to Aunt Belle, "I wish I could find my keys. Maybe I should ask the ghosts to find them."
"You probably should," she said."
I said to the room at large, "I really need my keys. Do you think one of y'all could find them for me and put them where I can find them, too? Please, and thank you." I always say please, and thank them in advance.
Nothing happened for a moment, then Aunt Belle frowned and said, "They say they are in the bookcase. Where you always keep them."
"They are not," I denied. "I've looked there three times already."
So we went back to watching the movie … for about thirty seconds.
She glanced over at me as I started to get out of my chair. "Going to check the bookcase again?"
"I guess," I said. "Or I'll never be able to concentrate on our movie."
Sure enough, there were the keys! I did remember to again thank everyone around here who helped put the keys back where they belonged.
The next day, we went to some garage sales. At one, the people had some tools and other things laid out in the garage. I usually browse the tools to see if there's anything my husband might want, and once in a while I even find something for myself. This time, I heard a man say, You don't want to buy any of these tools. I knew it was the man who used to own the tools, still hanging around as a ghost. He was not happy at all about his stuff being sold. He wasn't angry, just sad and upset.
In the car, as we left, I said to Aunt Belle, "The man in the garage wasn't happy about his things being sold."
"Yeah, I know," she agreed. "I felt him behind me as I was looking at some stuff across the garage from where you were. When I turned around, no one was there. I knew it was him."
Things like this happen once in a while when Aunt Belle isn't here, but a lot more frequently when she is visiting. It's nice when we both have experiences together, confirming what each other has seen, heard or sensed. Lots of fun!
As I write this to have it ready to put up this weekend (having cataract removal Thursday, so pre-planning the blog), I have a cleansing scheduled. It's at Aunt Belle's granddaughter's house. Something rather nasty is bothering her granddaughter, her two great-grandchildren and their dog. Nothing gets me moving to a cleansing quicker than a darn ghost messing with kids. And it being Aunt Belle's and my family already has my dander up. I'm taking my heavy backup, Angela, with me on this one. The nasty thing is already on his way outta there, and just doesn't know it.
If you missed the url's for my latest book: 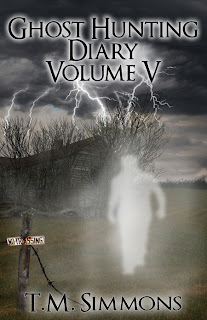