Do We See Our Pets Again?

I can't think of a better way to memorialize my dog Rex than to write about my beliefs as to this. That's why my blog is late this week. We lost Rex on Friday, and I couldn't face writing about him yet ... or doing much of anything else except grieve. It's hard even now. My goodbye to him was: "See you later, Rex." And the tears still flow easily.
Yes, I believe I'll see him in the afterlife … along with every other pet I've every owned. I like to think of him running and playing with my grandson while he waits for us. They enjoyed each other in life, also. Everyone loved Rex.
A man I know likes to argue about whether or not animals have souls. His favorite is: Well, then all the cows we eat have souls too, do they? And every other animal.
He's not someone I even bother to argue with. Half the time he's only arguing for the sake of being a devil's advocate; half the time, he believes some of his ideas. Whichever. Life's too short for arguments like that.
We had Rex for nearly twelve years. I'll miss him until I see him again.
~~~~
As for the rest of the week, it's been a fairly quiet one paranormal-wise. I have "glimpsed" a resident ghost now and then. But the most encounters I had this past week were at the Granbury Paranormal Expo on Saturday. Since it had been a few years since I'd attended a Psychic Fair, I'd forgotten how a gathering of sensitives can attract ghosts and spirits. I'd barely walked in the door when I started noticing a plethora of them around.
I had a fantastic reading with one of my favorite mediums, John Cappello, and we were inundated by the spirits who surround me. John even mentioned all of them. Mine were there because they always are … especially when I need them. They include not only relatives (which John mentioned) but also my spirits guides.
I believe this is also why our SRT group has such success with our investigations. Nearly everyone in our group has a high measure of gifts, and the couple who do not are fast developing their sensitivities. A lot of mine and Aunt Belle's relatives also have abilities, and John even mentioned that he believed I came from an ancestry such as that. He brought up quite a few truths (and rumors he could not have known about) that he picked up from those surrounding me. If you ever have a chance to attend one of John's workshops or have a reading from him, don't miss out. He's one of the best.
~~~~
I'm putting Dead Man Talking free for Kindle for the last time today and tomorrow (5/19 & 20). So grab a copy if you haven't already and let your friends know this is the last chance. 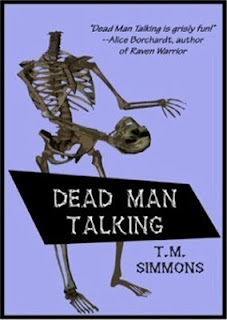