Part Two, coming up! I didn't have to get on the ark here in Texas last week to escape the flooding. Sad news, though, on the number of people who died as they try to navigate flood waters over some of our roads. Please remember, folks, if you see high water on the road, you have no way to gauge how high it is or how fast it's running. So: Turn Around! Don't Drown!
Now we're back at Claiborne House, and although I don't see anything paranormal in this one, it's taken a few minutes before we had to pack up and head out. 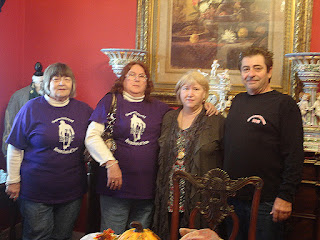 Me, Aunt Belle, Ann, Jerry
But I'll also show you one that Jerry LeBlanc sent me. He and Ann said they sometimes find a footprint that appears to be from a baby or toddler on their kitchen floor. There are no leaks anywhere, so no reason for there to be a damp spot of mist on the floor in front of the pantry door. One morning, they were lucky enough to snap a photo of the footprint before it disappeared. The floorboards are narrow, and the photo is a close-up, which justified them believing this is from a child. 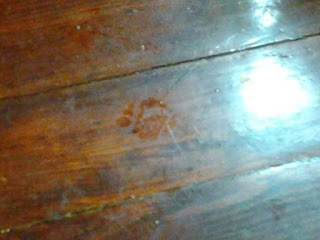 Claiborne House Baby Footprint
Another one Jerry sent me was one he calls "Happy orb looking at Ann playing piano." This one appears to have been edited somewhat, but I can see the happy orb. 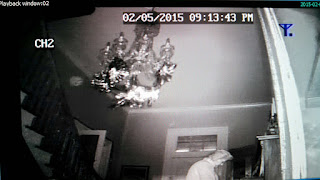 Happy Orb and Ann on Piano
In this next one, there appears to be a partial silhouette in the mist on the left. No, it's not that southern soldier on the right. That's a mannequin dressed that way. 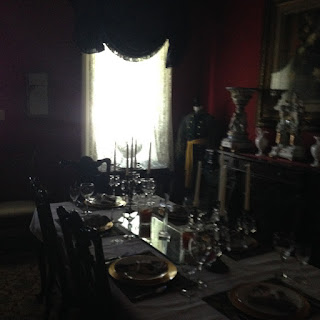 Claiborne House Mist Silhouette
In the next one, there appears to be someone sitting at the table. 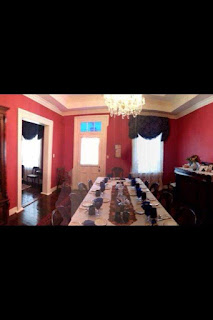 Claiborne House Misty Guest
Aunt Belle and I took our equipment around the downstairs later on in the evening, but as I mentioned last week, the ghosts might have been sleeping. (Do ghosts sleep? Well, maybe they do over in that other dimension.) We didn't even feel any energy from anyone. However, while we were out and about, we left our KII, flashlight and Raggedy Ann doll turned on in our bedroom. We had a bit of activity when we were there, but not a lot. However, at one point while Aunt Belle and I were out gadding about, poor Ann happened to go into our room alone to make sure we had everything.
"I wanted to let you know that I started to go in your room while you were gone yesterday evening," Ann told us the next morning. "I was just checking to make sure you didn't need anything. But when I walked in, the hands and forehead on that doll you had in there lit up all over! 'O.K.,' I said to her. 'I'm outta here.' And I got out of there fast!" 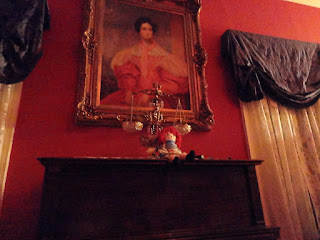 Anna Lee at Claiborne House
Aunt Belle and I giggled, but the look on Ann's face told us she wasn't amused. I guess some people might associate our little Anna Lee (the name of our doll) with the not-so-nice supernatural stories about dolls they hear around. However, we enjoy Anna Lee a lot, and she wears my consecrated cross when I'm not using it. Nothing can get through that to possess her.
Aunt Belle and I have a couple trips planned for 2016, but we haven't set any dates yet. I'll be sure and fill you in later. In the meantime, I would still recommend Claiborne House (903-665-8800 or http://www.claibornehousebnb.com).
~~~~
On the book scene, Shelley Lynn Johnson, my narrator for the Dead Man Mysteries, finished another audio book! Dead Man Hand is now up at Amazon, Audible and iBooks. 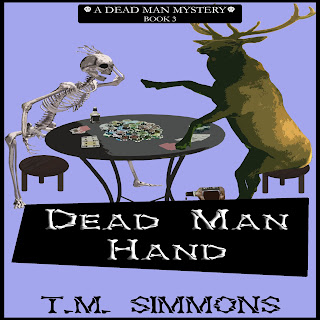 
Also, I have some codes for the new Dead Man Hand audio book … FREE! Email me at ghostie@swbell.net or Facebook PM (http://www.facebook.com/tranam.simmons) me and I'll send you one.
Shopping has interfered with more work on the short story, but I did get a little done on it. Still working, though. It has to be a good story for y'all.
Hope you had a wonderful Thanksgiving, filled with family, friends and, of course, lots of good food. Stay warm for my northern-half readers and cool for the ones down yonder. Enjoy the season we're in, a season of love and friends and … shopping.
Boo!
T. M.