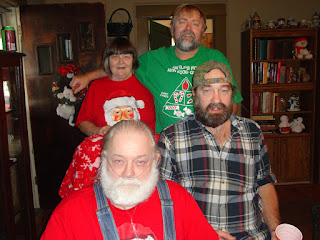 Christmas Eve 2015 at the Simmons House
(I look almost small next to my men!)

"I think we might need to do cleanse my house again. Last night the kitchen kept getting mist in it. And just now one of my kitchen knives liberated itself from the knife block. Scared both me & Hannah."
Thus started our 2016 ghost activities. I got this note from Angela, early the morning of January 5. By 11 a.m., we were doing a cleansing at her house, although we had already crossed over the female ghost who was causing the problems as soon as I arrived.
Angela could sense the ghost, and I confirmed what she felt when I got there. It was a woman who had been trying to make contact, but her abilities weren't strong enough to come through clearly enough for Angela to understand what she wanted. What did she want? She wanted to cross over into the Light. Of course, Angela had a good talk with her before we led her into the Light.
"You didn't have to pull that knife thing on us to get our attention!" was one of the mildest things she said to the woman. We didn't allow her to hang around long enough to get her name or what had happened to her. A ghost like this one isn't one we care to get more familiar with.
The ghost had a little bit of trouble understanding how to go into the Light, and she was even a little leery after we showed her the golden pathway and the doorway. She was fearful of retribution, but she finally glided up the path. Like each and every ghost we've ever crossed over, she did remember to turn and say "Thank you" before she went through the door.
Which brings me to something I try to remember but procrastinate on far too much: Cleansing a home where you associate with that other dimension frequently, like mine, should be done a lot more frequently than I do it. I write about ghosts, I talk to ghosts, and I allow them to hang around here if they behave. At least until I do a serious crossover. There's not much difference in a serious crossover and an ordinary one, other than the fact that an ordinary one is like I just did a moment ago: While I'm busy with something else (writing this blog), I point out the doorway to the ghosts if I sense one or more here that might be looking for it. In a serious crossover, I usually make at least a brief contact with the ghost or ghosts and lead them outside, encouraging them to go and actually pointing to the doorway that's always open for them.
My regular readers will remember that Angela's house actually has a portal into the other dimension in it. Therefore, whenever a ghost manages to slip through into her actual house, we pay close attention. We also check that portal often to make sure it's still closed, since when it's open and active, it causes problems in the house, both physical and mental ones. This time, even though the portal was secure, we also put a new protection packet with the other items we keep there for blockage. We reconsecrate old protection packets and make up new ones periodically, which makes our materials stronger.
After we did Angela's house, we asked our friend Sarah Brigdon to join us and did a long-overdue cleansing on my house. Boy, could I feel the difference in the atmosphere! As active as I am in messing around in that other dimension, I should cleanse at least every six months. I think this time it's been at least a year, and the atmosphere was way too heavy. Now it's like a different house.
But yes, Howard is still here. He still refuses to cross over. Since he helps me maintain discipline around here whenever a new ghost shows up, I'll admit I enjoy his presence. Even when Howard intrudes on my concentration and materializes strongly enough to startle me, I usually only smile and shake my head. I love hearing Howard laugh when he "puts on over on me."
~~~~
The Holidays sort of whipped my butt this year. Do you think it's because I was approaching yet another birthday in my senior years? Hopefully, my discipline is back and I'll get things finished, like the short story I was working on for Halloween, the next Ghost Hunting Diary, and another Dead Man Mystery. Fingers flying!
My narrator, Shelley Lynn Johnson, has also started the last Dead Man Mystery, Dead Man Ohio. I have to hurry and get another one for her to read. I do truly enjoy listening to her bring my books to life.
I have a new great-niece who was born on my birthday, and I do hope to get away to see her sometime before she's walking. Welcome to the world, Victoria Mae Cantner. 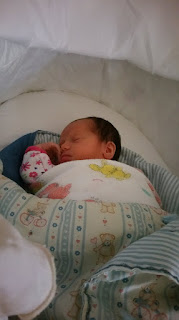 My Best Birthday Present
in 2016
Also, my sister Ann is coming for a visit with her little dog, L'il Bit. We're hoping L'il Bit and Dancer enjoy each other, rather than quibble over who is the most spoiled prima donna.
Ann is escaping the worst of the Minnesota winter and will return to the North country in May or June. She won't be too much of a distraction to my writing, except when we hit the "garbage" sales or take off to the casinos. I'll do my best to keep on track, though, and make 2016 a great year for new books.
Wishing all of y'all the wonders of love and peace in 2016. 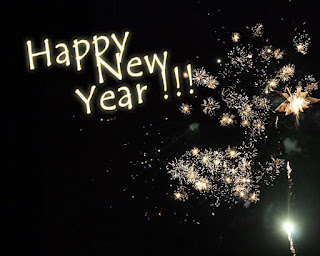