So Tuesday I'm sitting in an exam room at our eye doctor's office. I say "our" because he is also hub's doctor. This was hub's appointment day, so he was in the exam chair and I was in a chair just inside the right of the door.
No, I'm not going to identify this doctor except to say that the office building is in Dallas. We have been going there for several years, ever since I was diagnosed with macular degeneration. This doctor is one of those who has already assured his place in the Afterlife, because he cares deeply about his patients.
In all my years there, I had never seen a ghost or even felt one. However, I know this doctor believes, and he has read some of my books. Today, I noticed a bright flash of white out of the corner of my left eye. When I turned, a man walked in the door … but it wasn't our doctor.
He looked at me and nodded, then said telepathically: Hello. I'm Dr. Dave. Then he strode over and stood behind hub's chair.
My mouth was hanging open. This guy was pretty solid, although he was misty and definitely a ghost. I told hub, "A ghost just walked in. He's standing behind you."
"Really?" He looked over his shoulder but didn't see anything. He has seen ghosts, but seldom.
"He told me his name is Dr. Dave," I said.
About then, our doctor walked in, along with one of his young techs. The tech sat at the computer to take notes from our doctor … right beside the ghost. I kept quiet about our paranormal visitor.
After the exam, our doctor said to hub, "I want to take some pictures of that eye. We'll go over into another room."
"Can I ask you something first, Doctor?" hub said.
"Sure."
"Did you ever have a doctor here as part of your practice named Dave?"
Our doctor frowned, looked over at me, then back at hub. "Not that I can recall. Why?"
I laughed. "He's trying to tell you that I saw a ghost walk into this room a few minutes ago."
The young tech gave a startled jerk and stared at me for just a second. Then she hurriedly looked back at the computer screen. Our doctor smiled.
We went over to the room where the eye camera was located, and another tech came in and took the photos. Then our doctor came in and shut the door behind him. I knew what this meant. We had talked ghosts before, and each time, he closed the door so we could have privacy.
"There really was a ghost there, huh?" he asked.
"Yep," I said. "And he was still there when you came in, standing behind the exam chair. I didn't want to say too much, because I could tell your tech was scared."
He had this musing look on his face. "Funny you should say that. We have a doctor here who is a total skeptic. But the other day, he was examining a patient and he heard a noise like this." He rapped his fingernails on the desk.
"The other doctor said 'Who did that?' but no one answered. He want back to the patient and the noise happened again." Our doctor rapped his fingernails. "He looked up and demanded, 'I know someone is doing that. Who is it?' But again, no one answered."
"And?" I asked.
"It was in that room where you just were."
"Cool," I said.
"And you say his name was Dave? What did he look like?"
"He was less  than six foot, maybe five-ten. He was stocky but not fat, just muscular. He had iron gray hair in those waves like some men have, and I'd say he was in his fifties, maybe sixties."
"You saw him pretty clear," our doctor said.
"Yeah. He was rather misty, but he was wearing a white doctor's coat."
"A doctor's coat?"
"Yes, and as I said, he said his name was Dr. Dave."
He thought for a moment. "I don’t recall anyone who was associated with our practice who has passed named Dave. But I'll check some more. Also, this building was once a homeless shelter, so it might be that."
"Could be," I admitted, but I was feeling really cool about the fact that I'd gotten confirmation the ghost was actually real and had made his presence known before I saw him.
As we were leaving, I told our doctor, "He doesn't seem to be causing any trouble right now. Except for teasing the skeptic doctor. But if he does start giving  you any problems, let me know and I'll come back and help him cross over."
"I'll do that," he said as we hugged goodbye.
Even as I type up this story, I'm still feeling really good about the confirmation. I can't tell  you how many times I see something that no one else does. I would venture to say that at least forty-nine times out of fifty I don't get confirmation from anyone else about what I've seen. Well, unless I’m with Aunt Belle or Angela. Then forty-nine times out of fifty we all three experience the same thing. Still, there's always that fiftieth time that we don't.
~~~~
I just found Ghost Hunting Diary Volume V at the Amazon UK store in paperback. Way cool! It's at: 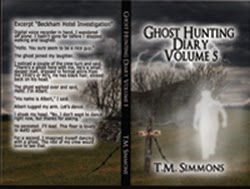 Also, Amazon has opened a store in Australia, so my Aussie friends can get my books. I found Volume V there, but not the paperback yet. I do have a few friends from there on my Facebook page, so hope they enjoy! 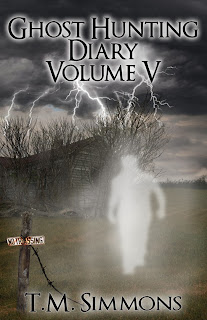 
We're having Thanksgiving here Saturday, and our son, Kelly, is already home. It's so nice to have family around. Kelly even took us for a ride over to our other son Joe's home last night to see their new puppies. Been a while since hub and I got out after dark. It's rather pretty. I usually only get to go when one of my investigators drives after dark. But that's fine. We usually find some ghosts on those drives.
I hope everyone has a wonderful Thanksgiving. The top of my list of things to be thankful for is my family. Next is my writing and all the friends and readers I have made with that. I'd have to add turkey and the other dinner things to the list, too. J
I hope some of your passed-on folks come by to enjoy the day with you. Whether or not you know it, I'm sure they will be there.
Boo!
T. M.