I always do the best to keep my word, and I promised the Spirit Fest speakers they could do their own investigation of this great old hotel. Friday night, November 21, 2014, several of them showed up and we all had a wonderful time. I do believe there might have been a shock or two along the way, also, even for the experienced paranormal folks. We had a nice group: Selena Roane of Fear Paranormal, Betty Moore of Paranormal Junkies, and George Jones of Jericho Tours of Tyler. George brought his daughter, Alexa, and Jennyfer Keohane, as well as a friend and two relatives with him (Adam, Logan, and Jason), and I know they enjoyed it, also. Well, I didn't talk to Logan after the investigation about the lady of the evening on the third floor and her innuendos toward him. He blushed a lot, but I still think he had an interesting evening. We had a little fun along the way in this group. 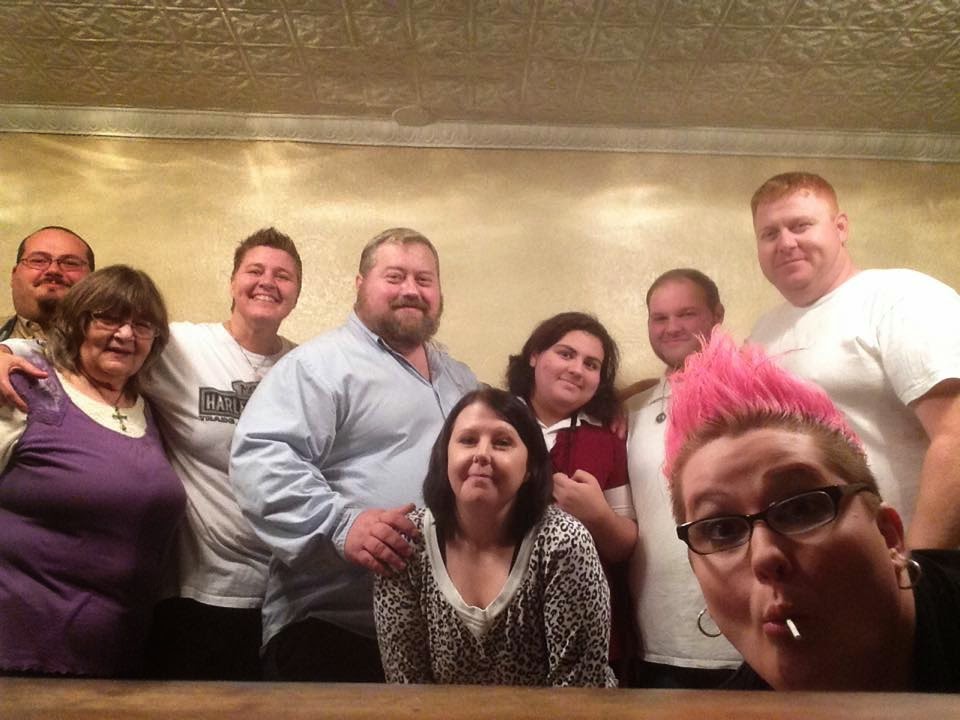 
There was far too much activity to get all of it in one of my weekly blogs. I'll have to just hit a couple of the interesting highlights, and a couple things that happened to my crew member, Floyd, and me on Saturday night.
First, here are Selena and Betty hard at work investigating: 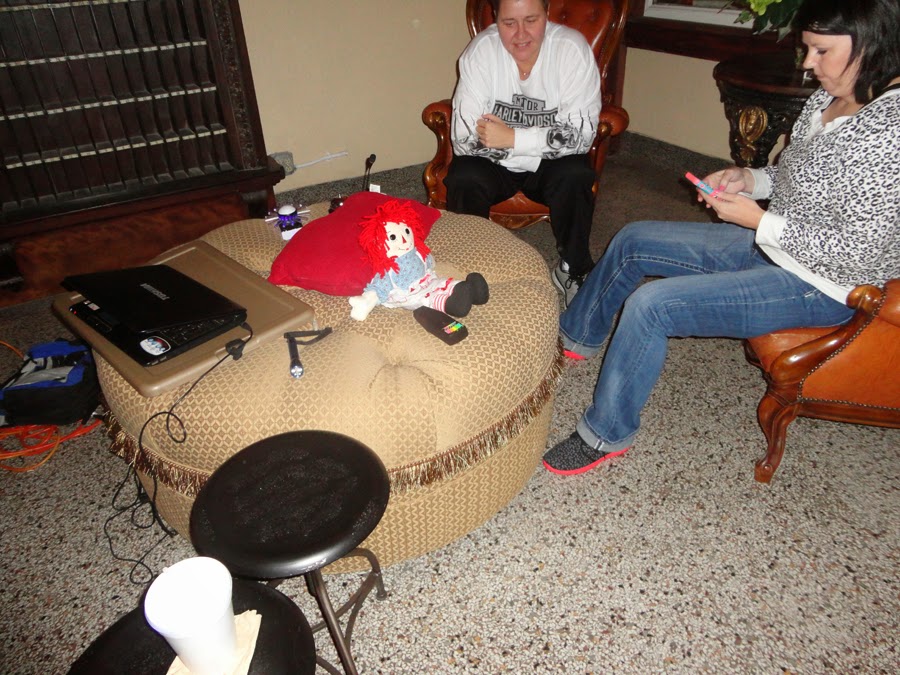 Adam knew he couldn't smoke inside the hotel, but he always had an unlit cigarette in his mouth. When we were in the Ballroom, one of the ghosts there (I think it was Albert) knocked that cigarette out of his mouth! The cigarette laid on the floor for quite a while and a couple amazing things happened. First, the end of it glowed as though it were lit. No, it didn't burn the floor or anything like that. It wasn't "real" fire. I saw this happen and heard the awe in people's voices as they watched the cigarette move, like someone was trying to pick it up!
Another time, we were in one of the rooms on the second floor. George kept insisting that someone was trying to take the KII out of his hand. He mentioned this several times. Suddenly, a loud crash sounded, and George said (for us and the recorder in the room), "Well, whoever it was finally got it out of my hand. That noise was the KII hitting the floor."
We went up to the third floor eventually. Hardly anyone is allowed up there, since it's still very much in need of reconstruction. However, these were experienced investigators and they all agreed to be careful. This is where Logan caught the eye of one of the ladies of the evening. She was determined to let him know she was interested! She never did ask for any money, so I think she was truly attracted to him.
I'll have to write up more of what we have found out about that third floor when I get time. From some of our research, as well as activity experienced up there, I do believe there were indeed ladies of the night there at one point.
We broke up around 2:30 a.m., and I came home to get some sleep and rest before we headed out Saturday night. My crew member, Floyd Brigdon, and I had plans to investigate the 1888 Building in Mineola. This building is on the corner down from the Beckham, and it evidently was a saloon at one point, with a brothel upstairs. Lore says the first Mrs. Beckham found out what was happening on the third floor of the hotel and refused to allow her husband to continue to have "girls" there. So he bought the 1888 Building for that purpose.
It poured down rain Saturday evening, but that didn't stop the activity in the 1888 Building. We were, again, as in the Beckham, the first paranormal investigators to have access to this building. We picked up enough information to put into its own diary, so again, I'll just be able to tell you about a couple very interesting things.
We went upstairs first, carrying equipment up one of those really steep old stairwells. Although Connie has replaced the first two wooden steps, the rest are worn in the center. Yes, as though worn down by many, many feet over the years. When I did a pre-investigation walk-through a few weeks ago with Connie and my friend Dianna, I crossed some of the women up there into the light.  However, two of them said they had stories to tell me before they left, and I had promised to be back to listen to them.
This is one of the photos we took of the upstairs. Connie and I discussed the layout during our walk-through, and she believes the women's rooms were on the right. We counted five areas where they probably had their beds. 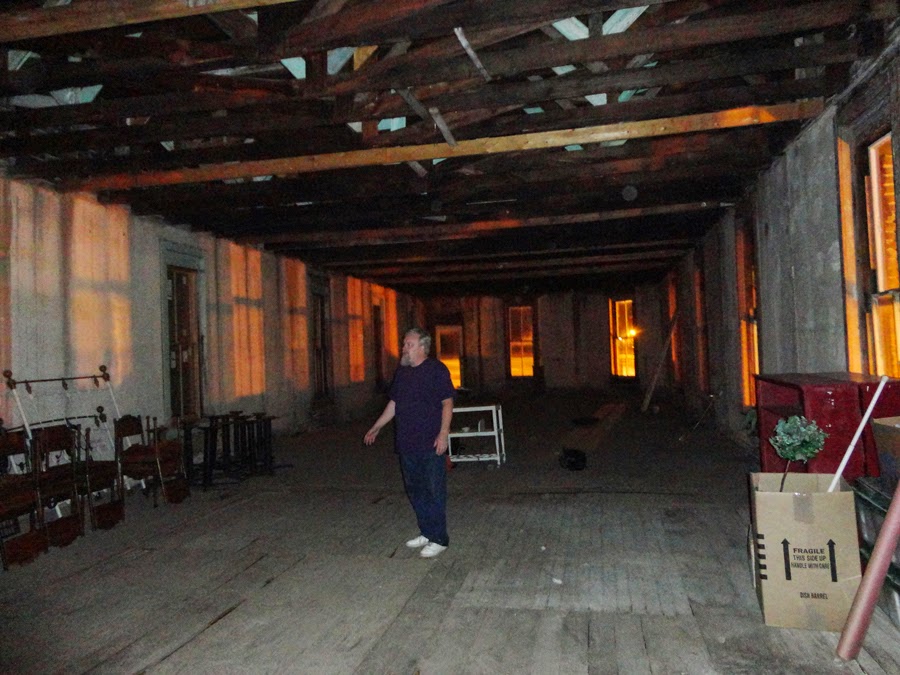 The "girls" up there were very antagonistic toward Floyd, due, we believe, to his being a man. Twice, someone tried to knock him off his chair, and both times he felt a hard pressure on his chest from what appeared to be someone's hand. That pressure even lasted quite a while after this happened. We checked for a bruise, but didn't see one. When I told the ghosts, in a stern and angry voice, that they had better behave and leave Floyd alone, my chair moved slightly under me! That really ticked me off, and I again ordered the ghosts to behave. The activity we had been having up to then "died" off for a long while. During that period, Floyd mentioned that "someone" had told him we needed to go downstairs for more activity. Although the activity in the upper floor picked back up as soon as he mentioned that, we saw a break in the rain and packed the equipment up to leave anyway.
Of course, the minute we started out of the door to go in the lower level, the rain attacked us again. But we went on in and talked to several ghosts.
This is one of the photos from the lower floor, where the saloon operated. 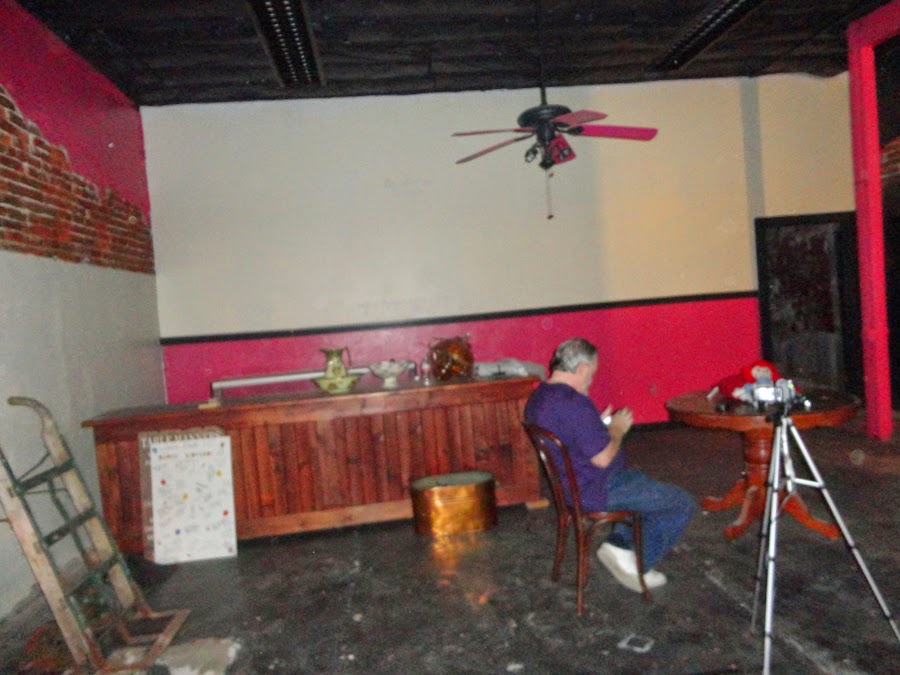 The strongest communication we experienced was with a ghost called Daniel, who indicated his last name was Jenkins. We'll have our friend Karla check him out. Daniel had a sad story though, and was very remorseful, as he should have been. He said he had caught his girlfriend Lila in the saloon and was so angry that he killed her during the resulting argument. We crossed Daniel into the light, but I think Lila was one of the ladies who wanted her story told. She was the very first ghost to make contact when we arrived upstairs, and interestingly enough, she contacted Floyd.
Anyway, I've got lots of things to write about, and since the book news is pretty much the same as last week, I'll close now. Remember, these ghosts we encounter were once real people. They all lived lives, and some of them have sad stories to relate. They can also get upset and let you know that in various ways. So, stay safe out there.
Boo!
T. M.